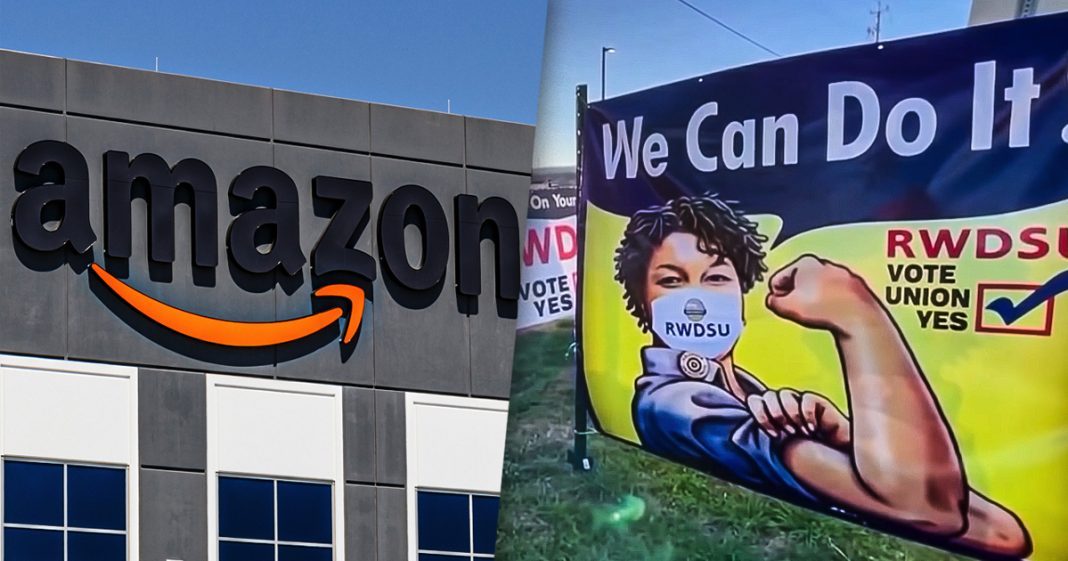 Via America’s Lawyer: In a landmark settlement with the National Labor Relations Board, Amazon can no longer interfere with future efforts by its workers to unionize. Mike Papantonio & Farron Cousins discuss more.

Mike Papantonio:             And finally tonight, some good news. The Department of Labor has reached a deal with Amazon that’s gonna prevent the corporate giant from interfering in workers unionization efforts. Farron Cousins joins me to talk about it. We, we just finished a story on this a couple of weeks ago, where we saw Amazon just bottom-feeding kind of conduct. The ugliest of ugliest, where it came to union busting. So this is a positive story.

Farron Cousins:                  Right. And I think Amazon at this point was left with really no choice, but to go ahead and agree to these terms from the NLRB. You’ve got the United brotherhood of Teamsters that came out recently and said, hey, Amazon employees, we’re willing to represent you. Why don’t you come and be a part of this? So Amazon with 750,000 employees here in the US alone, we could be looking at a mass unionization effort if, of course, this NLRB ruling is enforced and, you know, that’s something we always have to worry about.

Mike Papantonio:             That’s always the problem. I mean, you can get these rulings from the labor, from labor and it can be very clear. This is, this is the rules. You can’t do these things that you did last time, Amazon, and we know what they did. They knew they were breaking the rules. They clearly understood it, but they know the statistics. If you go back for a second vote, probably the corporation is gonna win on the second vote.

Farron Cousins:                  But, you know, they are suffering right now. Amazon is a victim of, of, you know, the, the great resignation, which is happening for these lower wage, wage jobs across the country. But they also see what’s happening in these other sectors. Right.

Mike Papantonio:             That’s all for tonight. Find us on Twitter and Facebook @facebook.com/rtamericaslawyer. You can also stream us live on YouTube and be sure to check out RT’s new portable app where you can watch all your favorite shows. I’m Mike Papantonio and this is America’s Lawyer where every week we tell you the stories that corporate media’s ordered not to tell because their advertisers won’t let ’em and because their political involvement doesn’t allow for it. Have a great night.