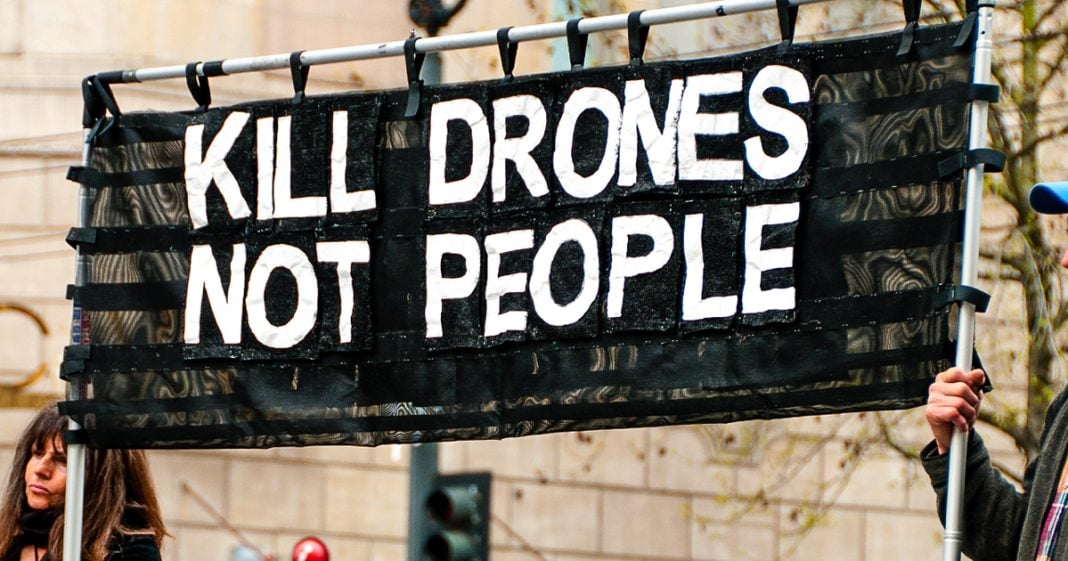 Via America’s Lawyer: The secret’s out – the Pentagon has been keeping hidden records of civilian drone strike casualties by the thousands. RT Correspondent Brigida Santos joins Mike Papantonio to explain why the Defense Department has been sweeping countless innocent deaths under the rug to promote its drone targeting systems.

Mike Papantonio:             A hidden Pentagon archive of drone strikes in the Middle East reveals that US airstrikes have killed thousands of innocent civilians since 2014. Brigida Santos joins me now, joins me now to talk about it. Brigida, what exactly do secret files, what are they showing right now, these files that seem to be surfacing?

Brigida Santos:                   Over 5,400 records highlight how the militaries flawed intelligence and rushed imprecise targeting methods have killed thousands of non-combatants in drone strikes in the Middle East. The US air war, which ramped up under the administration of president Barack Obama, was sold to the public as a way to reduce harm to civilians and allow the military to easily kill terrorists from a safe distance with the click of a button. The president even referred to the program as the most precise air campaign in history that would have strong congressional oversight. However, the reality doesn’t back up the, what’s going on here, Mike.

Mike Papantonio:             Yeah, I remember the Pentagon almost made it sound like it was a compassionate move by the military to use these drone strikes. Just unbelievable. How many civilians have been killed in these drone strikes, Brigida? According to the numbers we have, which is only a fraction of the truth, but what kind of numbers do we have?

Brigida Santos:                   Sure. Well, because the Defense Department has to taken extreme measures to suppress information about the civilian cost of its wars over the past two decades, the true death toll is unknown. However, independent airstrike monitoring groups have done their best to tally up as many as 48,000 civilian deaths across 93,000 airstrikes in Afghanistan, Iraq, Libya, Pakistan, Somalia, Syria, and Yemen. And of course, as you just said, the number though is likely much, much higher.

Mike Papantonio:             Now the people who are disclosing this, people like Manning and Snowden and Assange, they’ve been pretty seriously penalized. But has anybody been held accountable for the civilian casualties that come from the Pentagon or the, the folks that are responsible for the type of incompetence that kills tens of thousands of civilians? I think 50,000, as we can see from this report. Anybody, anybody being held responsible for this at all?

Brigida Santos:                   Of course not. No officials have yet been held accountable for their role in killing tens of thousands of civilians in drone strikes. Meanwhile, former intelligence analyst Daniel Hale has been imprisoned for violating the Espionage Act after leaking classified documents to reporters exposing how US drones are more deadly and less accurate than the Pentagon has claimed. The documents revealed that at least 90% of people killed in US drone strikes were not even the intended targets. Even though civilian casualties have been rampant in Washington’s war in the Middle East, the Pentagon continues concluding after investigating itself that it’s been justified in committing acts that the Geneva Conventions define as war crimes.

Mike Papantonio:             Yeah. Seems to be okay with all the progressives who for so long have been anti-war and anti-drone strike, seems okay that, that we’re gonna bring Assange back here and try him for simply disclosing this or that Manning, was still in, you know, be in prison for an awful long time, Snowden the same thing. Held captive, has, has to leave the country because he discloses this type of thing. But the people who are making the decisions, there is no repercussion. It seems like an odd twist to me that progressives have gotten so far off on trying to make people like Assange a criminal, when what he did was told these stories. But we’ll talk about that some more. When he comes back to the US, we’ll follow that trial. Thank you for joining me, Brigida.