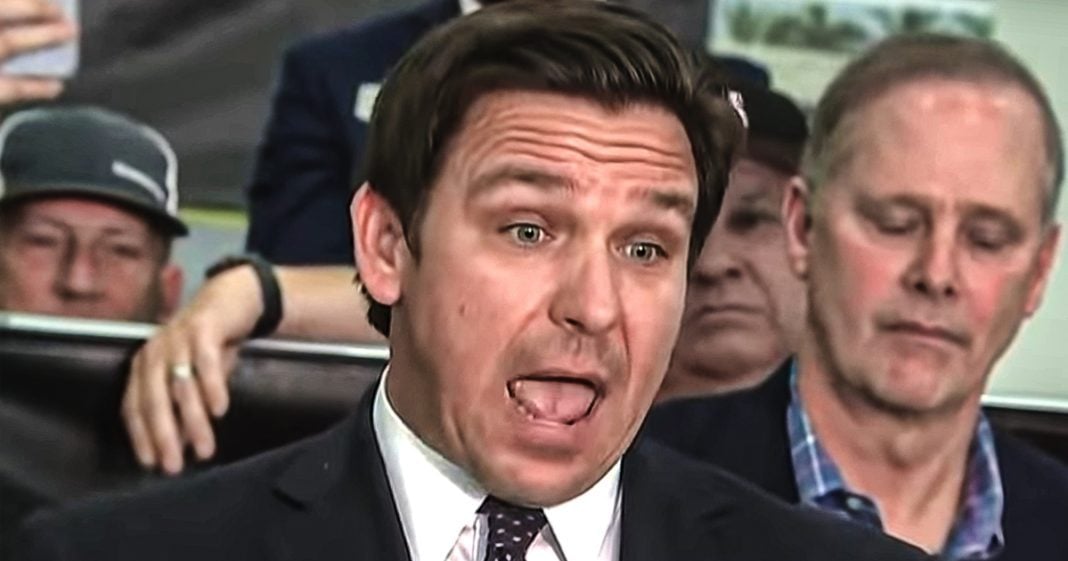 Mike Papantonio:             Florida governor Ron DeSantis is seeking funding for a state level military program that would be squarely under his control. Okay. Now, okay, first of all, there are 23 states that have this.

Mike Papantonio:             All right. So it’s not an aberration completely. Florida has had it in the past. It’s a regrouping on that saying, look, we don’t want the federal government telling us how we have to respond to emergencies. Maybe hurricanes, maybe floods. You know what this is about, the back, he, he’s getting ready to run for president.

Mike Papantonio:             Okay. This is a really hot button issue. The last speech I saw him talking about this, he tied it in to what’s happening in California with the law and order problem. Take it from there.

Farron Cousins:                  You know, this, this is interesting because as you point out, you’re right, 23 other states already have this. Florida hasn’t had it since 1947, you know, it was put in place during the second World War to bolster our, our national guard from the state. So it’s not out of the realm of possibility. It’s certain still within Florida law. But the, the rationale for it, we can see right through that a mile away. We know when a politician’s being a politician. We have had all kinds of hurricanes and natural disasters in this state since 47 and we didn’t need 200 because that’s all he wants, you know, Florida state guards members to show up. We, we, we get help from the federal government. We have plenty of help here in other states.

Farron Cousins:                  We, I mean, we already have more military bases than almost anyone. We’ve got the help if we needed it and, and people don’t see through what is happening.

Mike Papantonio:             What you’re gonna see is look at California it’s completely anarchy out there. You’ve got snatch and grabs. We’re gonna do a story on that where they’re breaking into, you know, breaking into malls with hammers and knocking down windows. This is part of that you understand. It is that we ain’t the West Coast, we’re Florida. We’re different. We don’t have the law and order problem that they have in Chicago where gangs are, what is it 50 people a weekend if you believe the reports. The mainstream media doesn’t report it because it’s black on black. You know, if it were, if it were black killing whites at a rate of 25 to 50 a week, we’d hear, it’d be all over the news, but it’s not because it’s gang gang related people getting shot. But his part, his angle is I’m law and order.

Farron Cousins:                  Yeah. And it is also a, a bit of a grandstanding type thing too, you know, he wants to stand up to the Biden administration and of course the military vaccine mandates, which he has openly opposed. So he’s gonna say, well, I’m gonna create my own here and I’ve got this own group that I can control. You know, obviously they’re not actual soldiers.

Farron Cousins:                  And so we are gonna be on the hook, the Florida taxpayers, we’re gonna pay these people. We’re gonna train them. We’re gonna do all this. And ultimately it’s for a giant political stunt. This isn’t going to help us in a natural disaster. It truly is not.

Mike Papantonio:             And his talking point is if Gavin was worth a he’d have somebody, groups like this at the malls to, you know, to stop this snatch and.

Mike Papantonio:             Los Angeles, San Francisco and Oakland have been hotbeds for crime in recent months, along with Chicago, with burglaries and murders becoming commonplace. But it was only recently that the media started paying attention and there’s a reason for that. I’ve got Farron Cousins back with me to explain that why, exactly why. We have, we’ve actually said this in the past. My, my position has always been, if you follow the numbers in Chicago, you’ve got 25, 30 people being killed, shot on, on a weekend. Okay. Now the media doesn’t pay any attention because it’s black on black. If it were whites being shot, you’d see a lot more of it. This story to me is kind of a, it is kind of a, a similar kind of analysis. You know, we didn’t, you have the gated communities now where this big, what I call mob flash attack is taking place. What’s your take on it.

Farron Cousins:                  Well, yeah, you know, it, it’s really interesting what is happening here because technically in these cities, crime overall is down. You know, we’re talking about, about 13% statistically, but these massive events are what’s becoming such a major problem in these cities where you have groups of 20, sometimes 50, there’s one group that was 90 individuals that appeared to be well coordinated and they do. They, they go to these high end stores, jewelry stores, high end shopping retailers, smash the windows, go in, take all these goods as much as they can carry out of there. And they seemingly disappear all at once together. As you said, this, this is a good kind of example, of like a flash mob, except not the kind that goes out does a quick dance and disappears. This is criminal activity that is scary for retailers.

Mike Papantonio:             They’re, they’re showing up with sledge hammers. They’re showing up with pepper spray. The people that are, are actually being attacked, the employees are being attacked in the process. Gavin, this is here. We, we did a story on DeSantis where DeSantis is bringing in the militia. He’s bringing a paramilitary group into Florida. I promise you that’s building, what he’s doing, DeSantis is doing is building to this talking point and that is law and order Republican. I mean, Democrats are so weak they can’t even control crime, but we can do it here in Florida because we have this paramilitary group. Gavin Newsom is a total failure. You’ve got, I mean, that’s, this is the argument. You know, their retailers are going outta business during the Christmas season. They’re even discussing maybe not even being open. So I mean, this is a big issue. This isn’t just, you know, something that’s passing through. I think it’s, I think it’s here for awhile.

Farron Cousins:                  Who decided, excuse me, to pander to these voters. Because when, when the DA came into office, the voters were saying, listen, we gotta do something about the harsh sentencing laws. And they were terrible for nonviolent offenders. But that’s the part that got lost in the translation.

Farron Cousins:                  Well, exactly. But here’s what I’m saying is the DA says, okay, you want, let me, let me give you what you want. And just let’s go of a lot of these prosecutions for actual violent offenders. So he tries to please these individuals by giving them something they technically didn’t ask for, trying to make it seem like, hey, I’m not just rounding people up and overloading our prison system here. So it was a truly a despicable case if you ask me of, of pandering that went absolutely off the rails because this guy didn’t understand what the hell he was doing here.

Mike Papantonio:             Well, they’re, they’re, they’re scrambling to try to explain it. You’ve got David Ball who is a professor at the, the Santa Clara University who’s saying, oh, this is natural. This is, this is just passing through. This is natural. This is a product of COVID. Everything is COVID. Well, the real experts are saying, no, this is very organized. It’s coming through so, they’re organizing through social media. They’re, you know, it’s a broad, broad problem that ain’t just something like this professor David Ball is trying to say that this is or Jonathan Simon at UCLA as, as if this is some just passing through cultural issue. It’s not. And Gavin Newsom better get ahead of it.

Farron Cousins:                  Well, Newsom’s been put kind of on his heels on this particular issue because he doesn’t know what to do. You know, this suddenly gets thrust into his lap because you have to expect him, you know, or at least I would if I were him, you’ve gotta expect your people, your mayors, your DAs, all these people across the state to be able to do their job. And when they stop doing that, suddenly it does fall on you maybe fairly, unfairly, whatever, but this is Newsom’s problem now and he’s the one that has to have the solution.