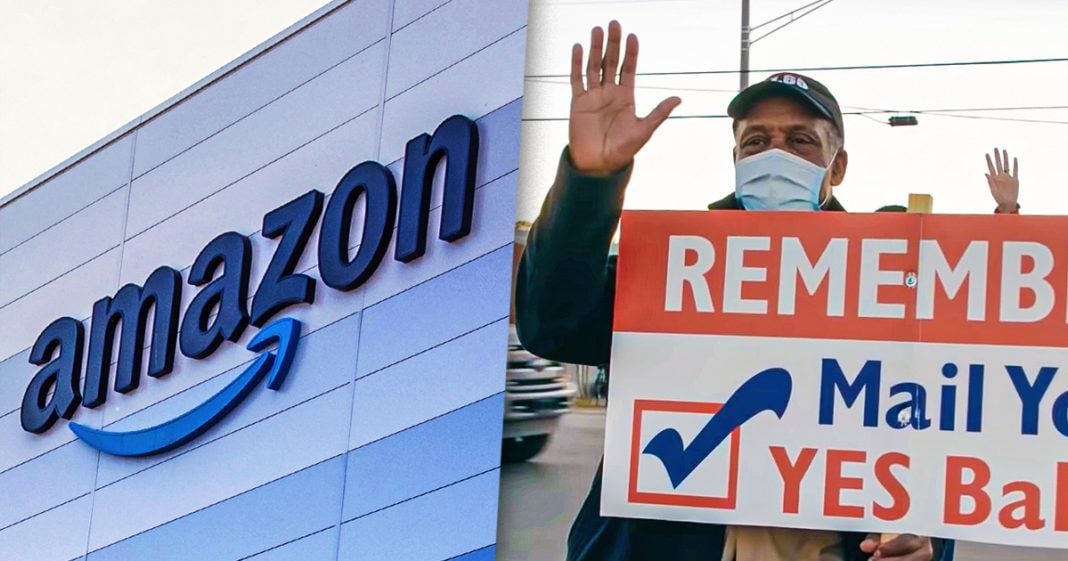 Via America’s Lawyer: The US Department of Labor orders Amazon to hold a new vote about unionizing their Alabama warehouse. Mike Papantonio & Farron Cousins discuss more.

Mike Papantonio:             And finally tonight, some good news. The Department of Labor has ordered Amazon to hold a new vote about unionizing their warehouse in Alabama after the government says Amazon interfered with the original vote. You know, it’s a great positive story. They get a second chance. Here’s how this typically works. In a union fight they come in and they know that they’re gonna break all the laws. The company knows like Amazon knew here, they’re gonna break all the laws and they know there’s gonna be another, another round of it, but that it works for them because they energized, they pick up energy while that’s happening. The things this company did that first round were pathetic.

Farron Cousins:                  You know, hardly ever. But two, Amazon’s already done the damage and they don’t have to pay a consequence for it. All that has to happen is a new vote. But those fears that Amazon put in the heads of those workers the first round have not gone away.

Mike Papantonio:             Empirical data shows that that second round is almost meaningless. Look, the first round they interrogated and fired people who were speaking up about a union. They threatened widespread layoffs. Sounds like that shouldn’t be permitted. They, they, they told the workers that they’re gonna lose their benefits if this happened. And they were gonna close the facility. Every one of those things is illegal and Amazon knew it was illegal. But they know they’re trying to get to the second vote, right?

Mike Papantonio:             The reporters, even the guy that did this, this story, all he talked about was the frigging mailbox. You got all these violations going on.

Farron Cousins:                  Are you trying to push a union? What information have you given out to your fellow workers? All right. You know what, you’re outta here. You’re gone. So people lost their jobs for advocating for a union, which is 100% illegal.

Farron Cousins:                  And instead of getting punished for this, instead of people widely reporting on it, we get reports about a mailbox that was too close to the Amazon front door. And of course, Amazon faces no charges for employee retaliation.

Farron Cousins:                  To work for Amazon on this. And instead of spending millions on these lawyers, you could have just taken the millions and, and given it to your workers paid for these great things.

Mike Papantonio:             Imagine, imagine being the lawyer who says I had a really good day today.

Mike Papantonio:             I kept people from getting, you know, being treated right in a workplace. I really had to, those are defense lawyers that choose to do that for living. That, I mean, they set out, that, that to them is a victory. They’re so, it’s so upside down in their head that that to them is a big victory.

Farron Cousins:                  I, I, I couldn’t imagine sitting at the dinner table with your, with your spouse and your kids and saying, oh, kids, it was a great day. These people don’t get healthcare anymore because of me.

Mike Papantonio:             Yeah, exactly. That’s, that’s the honest truth about some of these defense lawyers though. It’s just the truth. That’s all for tonight. Find us on Twitter and Facebook @facebook.com/rtamericaslawyer. You can also stream us live on YouTube and be sure to check out RT’s new portable app where you can watch all your favorite shows. I’m Mike Papantonio here with Farron Cousins, and this is America’s Lawyer where every week we tell you the stories that corporate media is ordered not to tell because their advertisers won’t let ’em and because their political involvement just doesn’t allow for it. Have a great night.