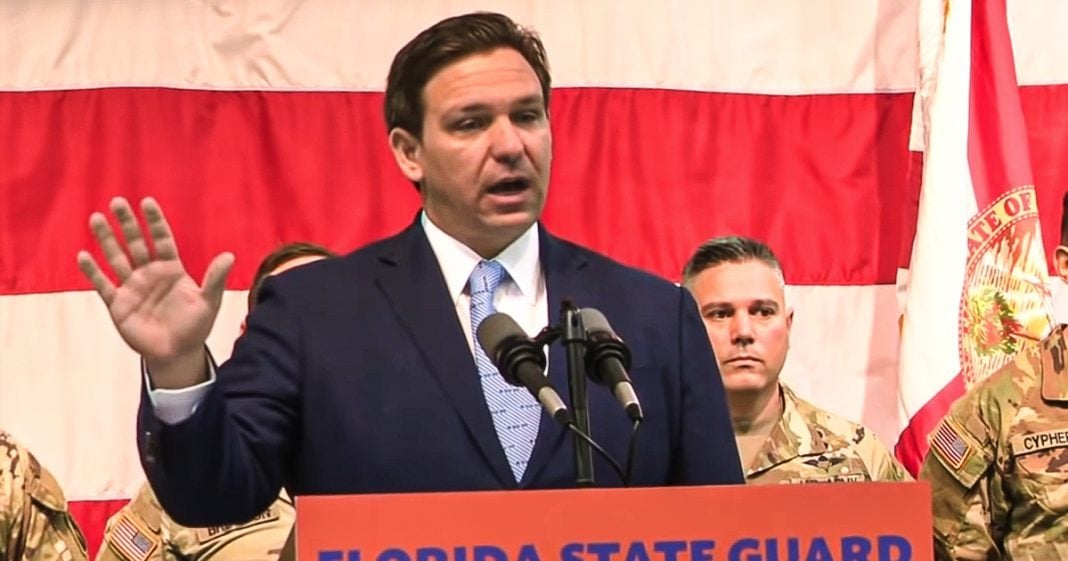 Via America’s Lawyer: Governor Ron DeSantis seeks funding for a “Florida State Guard” that would be squarely under his control. Mike Papantonio & Farron Cousins discuss more.

Mike Papantonio:             Florida governor Ron DeSantis is seeking funding for a state level military program that would be squarely under his control. Okay. Now, okay, first of all, there are 23 states that have this.

Mike Papantonio:             All right. So it’s not an aberration completely. Florida has had it in the past. It’s a regrouping on that saying, look, we don’t want the federal government telling us how we have to respond to emergencies. Maybe hurricanes, maybe floods. You know what this is about, the back, he, he’s getting ready to run for president.

Mike Papantonio:             Okay. This is a really hot button issue. The last speech I saw him talking about this, he tied it in to what’s happening in California with the law and order problem. Take it from there.

Farron Cousins:                  You know, this, this is interesting because as you point out, you’re right, 23 other states already have this. Florida hasn’t had it since 1947, you know, it was put in place during the second World War to bolster our, our national guard from the state. So it’s not out of the realm of possibility. It’s certain still within Florida law. But the, the rationale for it, we can see right through that a mile away. We know when a politician’s being a politician. We have had all kinds of hurricanes and natural disasters in this state since 47 and we didn’t need 200 because that’s all he wants, you know, Florida state guards members to show up. We, we, we get help from the federal government. We have plenty of help here in other states.

Farron Cousins:                  We, I mean, we already have more military bases than almost anyone. We’ve got the help if we needed it and, and people don’t see through what is happening.

Mike Papantonio:             What you’re gonna see is look at California it’s completely anarchy out there. You’ve got snatch and grabs. We’re gonna do a story on that where they’re breaking into, you know, breaking into malls with hammers and knocking down windows. This is part of that you understand. It is that we ain’t the West Coast, we’re Florida. We’re different. We don’t have the law and order problem that they have in Chicago where gangs are, what is it 50 people a weekend if you believe the reports. The mainstream media doesn’t report it because it’s black on black. You know, if it were, if it were black killing whites at a rate of 25 to 50 a week, we’d hear, it’d be all over the news, but it’s not because it’s gang gang related people getting shot. But his part, his angle is I’m law and order.

Farron Cousins:                  Yeah. And it is also a, a bit of a grandstanding type thing too, you know, he wants to stand up to the Biden administration and of course the military vaccine mandates, which he has openly opposed. So he’s gonna say, well, I’m gonna create my own here and I’ve got this own group that I can control. You know, obviously they’re not actual soldiers.

Farron Cousins:                  And so we are gonna be on the hook, the Florida taxpayers, we’re gonna pay these people. We’re gonna train them. We’re gonna do all this. And ultimately it’s for a giant political stunt. This isn’t going to help us in a natural disaster. It truly is not.

Mike Papantonio:             And his talking point is if Gavin was worth a he’d have somebody, groups like this at the malls to, you know, to stop this snatch and.