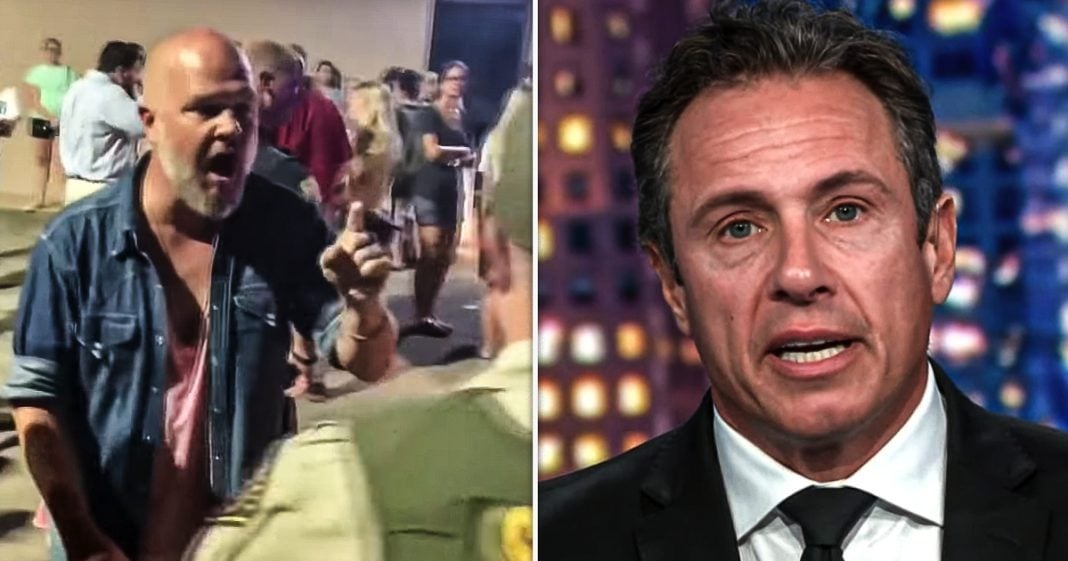 Via America’s Lawyer: While parents and teachers continue debating mask and vaccine mandates, the FBI quietly activates its counter-terrorism division against school board officials, deeming them potential threats. Plus, CNN has officially fired Chris Cuomo after the primetime anchor was found to have provided talking points to Andrew Cuomo amid the former NY governor’s sex scandal. Mike Papantonio & Farron Cousins discuss more.

Mike Papantonio:             School board members have experienced unprecedented threats from parents this year about a variety of issues and attorney general Merrick Garland is having the FBI investigate. Farron Cousins from trial lawyer magazine joins me now to talk about this. Farron, you know what I get the idea, teachers should be able to teach without interference from parents, but the other side of it is parents have responsibility to raise their children the way they want to raise them. That seems to be, that seems to be where the issue splits here. The other issue, really the FBI getting involved, isn’t this a local politics? Isn’t this local law enforcement, local legislation that takes care of this? Merrick Garland, you understand why he had such a hard time in his, in, in his hearings to become a Supreme Court judge.

Farron Cousins:                  Right. And also in the recent hearing where he defended the actions of using the FBI to launch these investigations because as you put it, listen, these threats are real. It is happening. There is no doubt about that and it is wrong 100%. but does it rise to the level of needing to get federal authorities involved in this?

Farron Cousins:                  And I think we have to look at how plausible are these threats because that is something law enforcement would look at. And, and I haven’t seen quite anything that, that to me would rise to the level of FBI, you know, federal agent involvement. This should be a local police issue.

Mike Papantonio:             It’s softball after softball that the Democrats give Republicans, this is just another one of them. The last show we talked about the books in the library. Okay. So who wins on that? From a talking standpoint, from a political talk, the Republicans win. They win on this too. This guy has an agenda and it just doesn’t fit here, man. Local politics is local politics. It’s local law enforcement that gets involved here.

Farron Cousins:                  Well, and you run into an issue here with the slippery slope that we have always seen with the FBI. You know, first it was, they wanted to go after big figures like Martin Luther King Jr. We’re, we’re, we’re going to attack him. We’re going to, you know, mount this pressure campaign to get him to kill himself, the FBI did, and then it spreads from there. It’s, okay, well now who’s causing drama, oh, it’s the labor unions. Let’s go infiltrate the labor unions. Then it was the environmental activists. And now it’s risen to the occasion where we have to get the FBI involved because you’ve got some, a lot of these people will act crazed, these parents showing up there.

Mike Papantonio:             Well, they are. Some of them have lost their logic. They, they’ve got, look, they don’t want people messing with their children. It has to do with curriculum. It has to do with vaccine. It has to do with mask mandates. It has to do with a lot of things. But your point being is, I think this is your point, it’s, it’s brilliant, it is. It started in a slow progression. We go after the mobs. Okay. We go after, but then we go after the union’s. Not okay. Then we go after the social activists. Not okay. The FBI has been this ugly little process that was, it was uncovered in the Church hearings. You and I have talked about this. Where that little freak J Edgar Hoover, who was an absolute nutcase, was going after Daniel Ellsberg. No back then it was Seymour Hersh. Going after Seymour Hersh to the point they were threatening his life. This is just another thing and now it’s in our households. FBI showing up to arrest somebody because they were, now granted, they said some crazy things. But that’s for local police. It’s not the FBI that shows up at a person’s house because when that happens, it’s nothing but another softball for the Republicans.

Farron Cousins:                  Right we’re living in a country right now that gives more money to police departments across this country than they could ever even know what to do with. And if you’re telling me that these police at your little local, you know, police station don’t have the resources to investigate, hey, Joe Smith said he was gonna, you know, kill a school board member. Can you look into that? They can look into that. They can investigate this. They can see if the threat was credible. They can press charges if needed. You do not need the FBI involved in this, unless they have evidence that there’s some kind of grand conspiracy, which we don’t see.

Mike Papantonio:             On the other side of it, I took a look at some of the comments about this whole thing. They’re talking about Antifa. Okay. There, there’s this comment describing them as disaffected dropout punks with skateboards armed to the hilt. They talked about a case, I mean, I’m showing you the dichotomy. Here’s this side and here’s the parents. FBI’s is not going after them. They’re not treating them like terrorists. Last in this, this, this comment goes and talks about what three weeks ago, they let one of the Antifa go who took an ax and chopped his way through the door of a legislator. Okay. You know what the punishment was? They put him on probation and oh, by the way, gave him back his ax. So the, so it’s an easy discussion. It’s an easy dichotomy that you say, what is this freak doing going after parents? And they’re correct. I get it. There’s some crazy conduct. But it’s local politics. It’s not the FBI showing up at people’s houses.

Farron Cousins:                  Right. This, this is red meat, as you said, for the Republican party, because Merrick Garland in that hearing didn’t know how to defend this.

Mike Papantonio:             Didn’t, wasn’t clear whether he even knew the details of what was happening.

Mike Papantonio:             You’ve got this guy, Andrew Cuomo, who’s pretty much a thug. I mean, intimidation, threats, fear factor always out there about the way he ran politics. In comes his little brother, 51 years old and says, big brother, I’m going to help you. I’m going to use the power of CNN. I’m going to use our investigators to help go after the women who were accusing you of being a predatory punk. And, and so he gets involved. It’s, it’s crazy.

Farron Cousins:                  It truly is. All of this while Chris Cuomo, obviously still on the air at CNN throughout all of this doing his show every day, and then behind the scenes, we now have these text messages and phone calls where he’s working with the aids of Andrew.

Farron Cousins:                  Saying, okay, here’s this woman, okay, I’ll get on it. I’ll contact my people in the media. We’ll find out what’s going on. I’ll find out when the next story is going to break and who it involves, which woman it involves and we’ll go from there. It was obvious that this so-called journalist was working as an aid for his brother.

Mike Papantonio:             CNN whistles, kicks the can down the road, like his, this odd ball hasn’t done anything wrong. At least say it happened. At least have the decency to say yes, we were part of trying to help brother Cuomo pull out of these awful charges that were being made and they were legitimate charges. I mean, there’s no question they’re legitimate charges. Brother comes to the aid. CNN does nothing. It just shows you how dangerous, how dangerous tribal politics is. CNN has become a totally tribal progressive organization that, you know, that’s okay. I liked that there’s progressive voices out there, but you have to temper it. CNN is in the, they are in the dumpster right now with ratings. It’s not getting any better. And this is the type of thing that the public looks at and says, yeah, why would I, why, why do I want to count on them as a source? Don’t you say, don’t you tell the truth rather than trying to cover up the obvious? It’s, there’s no question what happened here. It’s not, this is not open to debate. Did he do this? Yes, he did it. He actually wrote talking points for his brother, wrote talking points on what brother needed to deliver to the media so the media could then take it and use it in their story in a positive way. He did that. So, I mean, at what point are you a journalist or are you just another punk looking out for the interest of your brother punk? And I mean, that’s, that’s the story to me.

Farron Cousins:                  Yeah, absolutely. And look, we also have to look at this, because I know Chris Cuomo is liked with the Democrats. Andrew Cuomo was too. But reverse the situation here. If this was a Republican politician and a Fox news pundit, you’re going to be calling for their head. And I don’t think we should be any different.

Farron Cousins:                  Just because you may agree with, with their politics here. This is a violation of journalistic integrity.