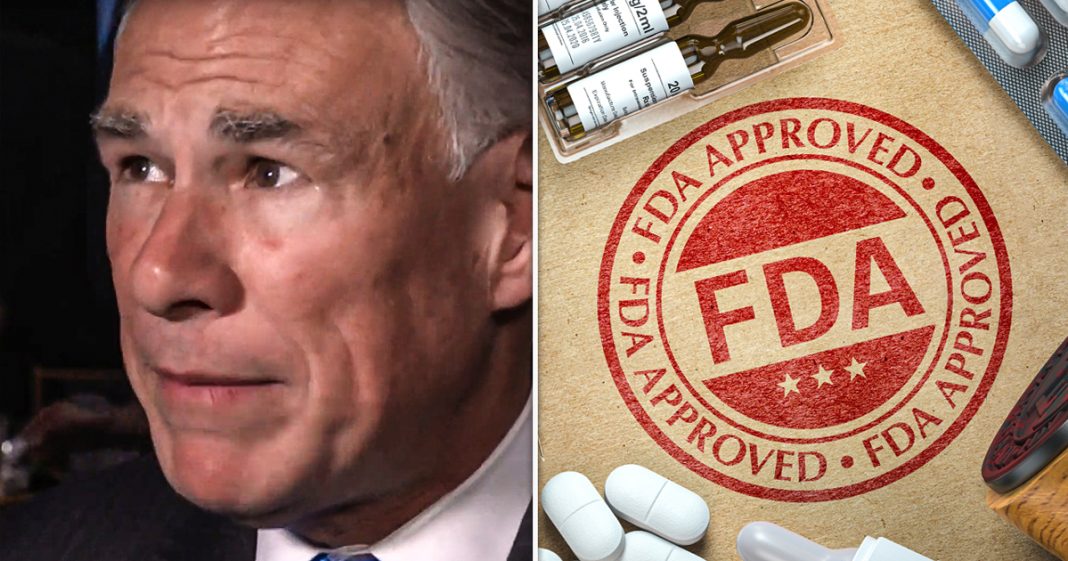 Via America’s Lawyer: As school curriculums become a hot-button issue among Republicans, TX governor Greg Abbott is taking aim at books that cover gender identity and sexuality – calling them “pornographic” – and insisting they be pulled from classrooms. Also, there’s a revolving door between the pharmaceutical industry and federal regulators, and President Biden’s latest pick to run the FDA is no exception. Mike Papantonio & Farron Cousins discuss more.

Mike Papantonio:             Texas governor Greg Abbott wants schools in his state investigated for carrying books that, that he considers to be pornographic. You know, here’s, this story, what caught me is it’s another one of those things like it or not, that Republicans grab ahold of and like they did in West Virginia with the whole parents are messing with my child’s education. And I don’t like it. This is a continuation. They figured out this works. So now, you have this, this thing that’s going to work for them.

Farron Cousins:                  Well, well and it’s very scary because obviously the governor comes out and says, listen, we have a problem. We have found pornography in high school libraries. Well, that’s attention grabbing. Oh my God. You know, we, you know, you don’t want porn in a high school library. You got to get, but people assume when you say that, okay, well, somebody snuck in some Playboys in there, there’s some Hustlers hidden. No, what they’re talking about are books that might be considered probably beyond a high school student to a degree, depending on, you know, the maturity level of them. But they deal with issues of, of abuse. They deal with rape.

Mike Papantonio:             Well, to me, Farron, I mean, all a parent has to see is one of the books is called, it’s called, Gender: A Memoir. Regardless of the merits of the book, my point is that you have Abbott taking that and the other, the other one is called, In The Dream House. And so he takes these books, he takes excerpts of it, I can’t think of anything that is going to inflame Texas voters anymore than this. And then you got Beto O’Rourke now jumping into it. He is just such a lightweight, I mean, just a terrible lightweight. Has, I don’t know what he’s done in his life. He has no life experience for God’s sakes. So now this is, they’re going to beat him to death with this, man.

Farron Cousins:                  But I’m not, you know, I’m not too thrilled with him either. But either way, they, they jump on these social issues. And that’s what these books are, you know, at the heart of it, they don’t have a problem with the books, but they understand Abbott’s got a problem in the polls. His policies, even among Texas voters are not popular. And so what can I do? Oh, well look, what just happened in Virginia, they ran on the school issues. There’s a problem with the schools and parents need to be involved. And that in, in, in two short weeks, he has jumped on that and is running ahead with it.

Mike Papantonio:             Okay. It’s not just him. Florida, Rhode Island, New Jersey, Ohio. I mean, it, you can’t take a book called, Gender: A Memoir, and tell a parent that this is what your child’s reading in school and that be okay with the parent. I don’t, you know, there’s, it’s just not going to happen. But you can take that title and you can take in dream, In The Dream House, and you can beat the Democrats to death with it. It’s going to spread and it goes back to this whole issue of what’s happening to the polls. It’s this counter-culture kind of notion that’s, that’s, it’s complicated because it does have to do with cancel culture. It does have to do with don’t mess with, with, with rights, parents rights. It has to do with political correctness, it’s this move towards political correctness. It all, it all fits in there with inflation, right? And it fits in there with some policies that the, that they see this, this president executing on, and this is just another one of the, the problems.

Mike Papantonio:             It’s what you do in trial is you, you, you, you go in with that issue that just enrages everybody, and then you come back and you come in with a second, you know, the second phase of that. It’s, it’s brilliant. I mean, I hate to say it, but it’s brilliant and it’s a big problem for the Democrats.

Farron Cousins:                  Well, Republican strategists and again, I don’t like to give them credit for anything, they are good at what they do. And the Democratic strategists are just so God awful. It’s amazing they ever win.

Mike Papantonio:             President Biden’s pick to run the FDA is a holdover from the Obama administration. It is a disaster. This guy is like asking Colonel Sanders to have a chicken farm and protect the chickens. He is an absolute joke. He comes from Duke University, where everybody in the pharma industry goes to get experts. When a pharmaceutical company kills people with bad, bad drugs, they go to Duke to get that expert to say, well, it wasn’t the pharma’s, pharmaceutical, it wasn’t the drug’s problem.

Farron Cousins:                  I mean, the list of companies that this guy has, you know, basically gotten money from or worked on behalf of in some capacity. I mean, look at this, Merck, Amgen, Biogen, Genentech, Eli Lilly, Boehringer Ingelheim. I mean, all the usual suspects are right here in this guy’s resume and he has also advocated for, what if we make the, the, you know, trial phase of prescription drugs, what if we just speed that up a little bit? What if we don’t take as many precautions to get new drugs on the market?

Mike Papantonio:             He’s also said, and this, this is missed on people. He tried to come up with a policy to where it was okay to sell any drug off label.

Mike Papantonio:             And it was and, and you can use a preemption argument. You could say, well, the FDA says that any drug can sell, be sold off label. He did that specific, Califf, we’re talking about Califf, by the way. But he did that, Robert Califf, he did that. It was a, it was a payoff to the drug industry. Now Biden, this is Biden’s guy. He’s a holdover from Obama. He was terrible back then. He’s terrible right now. And I don’t know whether he, whether Biden’s just tone deaf on protecting consumers. But every move this guy makes is killing consumers.

Farron Cousins:                  This is absolutely the kind of guy where if, if Trump had appointed him, this would be national headline news.

Mike Papantonio:             He, he covers just about everything. Farron Cousins, thank you for joining me. Okay.