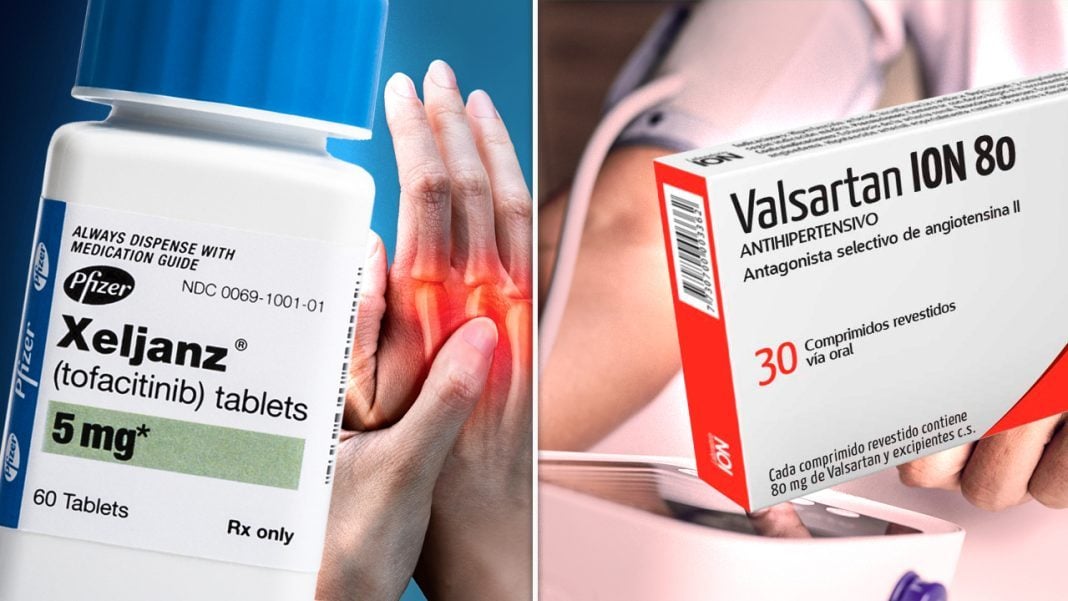 Via America’s Lawyer: While Pfizer has fessed up to the inherent cancer risks of its Xeljanz pills, manufacturers of Valsartan have kept quiet about a certain ingredient that’s primarily used for rocket fuel and inducing cancer in lab rats. At the Mass Torts Made Perfect conference in Las Vegas, RT’s Brent Jabbour, filling in for Mike Papantonio, sat down with attorney Sara Papantonio to discuss ongoing litigation against both companies.

Click here to find out more about Xeljanz lawsuits.

Mike Papantonio:             Recently at the Mass Torts Made Perfect conference in Las Vegas, RT’s Brent Jabbour sat down with attorney Sara Papantonio to talk about the ongoing litigation of Xeljanz and Valsartan, two major pharmaceutical cases and they’re killing people. These, these drugs are killing people. So they talked about it. They followed where the money goes, where it ends up. Let’s take a look.

Sara Papantonio:              They’re warning the public about a whole heck of a lot. Right now, what we’re dealing with is we, what we’ve just learned, is that Xeljanz shows an increased risk in cancer, major cardiac events and blood clots. And it’s no small risk. This data’s coming directly from the defendants in this case, which is going to be Pfizer. And Pfizer is telling the FDA that there is a 48% increased risk in cancer after taking Xeljanz, a 33 increased risk in major cardiac events and a long running increased risk in blood clots. So you’re talking about three threats with one drug, but it’s not only Xeljanz that the FDA is warning about. Based on all this data that we’ve seen over the course of now about 10 years, the FDA has made the ultimate decision that they’re going to make warnings about the entire class of drugs that Xeljanz is in. Now, those are JAK inhibitors. So it’s really extending based on what they found on this research to all three different types of drugs.

Sara Papantonio:              Well, the, this class of drugs has been around for awhile and they’re used to treat inflammatory diseases like rheumatoid arthritis, ulcerative colitis. But Xeljanz, when it entered into the market in 2012, what the FDA said to Pfizer is you have to conduct a clinical study on this, this drug. We got to know what the risks are. So that clinical study has been going on for 10 years now and based on the results of that, the increased risk in major cardiac events, the increased risk in cancer, the increased in blood clots, the FDA is, is standing back and saying, wait a minute. This entire drug class is probably going to carry the same risks that we’re seeing in Xeljanz.

Brent Jabbour:                    And, and this is an overarching theme that we’ve talked about is the regulation aspect of it. The FDA approves a drug based on information provided to them by the drug company and then says, oh, and by the way, you’re going to have to do some extended studies. The drug company is. I mean, isn’t that a huge failure there?

Sara Papantonio:              Well, of course we want to know about it beforehand. Now it’s we’re 10 years later, the drug’s been on the market for, for nearly 10 years and they’re just now saying, oh wait, might be a little bit dangerous. But the really unique fact about this case is all of this information about increased risk in cancer and major cardiac events, blood clots, is coming directly from the manufacturer of the drug. And that is why this case is going to be so interesting because when we bring it to court, and when we tell a judge and a jury that there is an increased risk in major cardiac events, blood clots, cancer, and Pfizer stands up and says, no, there isn’t. Guess what, this information comes directly from their file cabinets. They can’t get up and tell us no, because they found the increased risks themselves.

Sara Papantonio:              Well, the FDA had to, and, but the FDA had to because they, they, they forced Pfizer to release this information. What I think is going to happen is we’re going to see, as discovery comes out, is that Pfizer has been holding onto this information since the very start of this study. They’ve known about this increased risk, but since the FDA wasn’t forcing their hand, they hadn’t said anything. So I almost wonder if this is going to be a cover-up type case. Because that’s what it’s looking like.

Brent Jabbour:                    Adding to all of this, popular brands of blood pressure and heart medications containing Valsartan are also being recalled due to the fact that this ingredient has been contaminated with known carcinogen, NDMA. Tell us about that.

Sara Papantonio:              Yeah, so, so Valsartan, like you said, is a type of drug that is used to treat high blood pressure. And what happened in the manufacturing process is something went wrong. These manufacturers weren’t paying attention to the chemicals that they were putting in and somewhere along the manufacturing way, NDMA started showing up in these drug products. Now NDMA is a known probable carcinogen. Really the only use of NDMA is for rocket fuel and the only medical use of NDMA is to induce cancer in laboratory rats. And so we’re finding NDMA in Valsartan at extremely, extremely high levels. Now, as a result of this discovery of the carcinogen in Valsartan the FDA set a threshold, a threshold limit for a safe amount of consumption of this carcinogen per day. We’re finding that these manufacturers have 400 times that threshold limit. So every day that people are trying to manage their high blood pressure, they’re actually ingesting a carcinogen and as a result of that, we’re, people are developing all kinds of cancers.

Sara Papantonio:              Right. It’s a, it’s a manufacturing defect in the process, but it’s one that could have easily been fixed had these manufacturers conducted an entire risk assessment before manufacturing the drug. So it was absolutely avoidable and it, and it’s been persistent for the last four years is what we’re finding. But if they had been testing the drug for nitrosamines, like they were supposed to over the last four years, they would have found this and this would have been a non-issue. You wouldn’t have hundreds, if not thousands of people who have developed cancers as a result of taking that drug.

Brent Jabbour:                    And we’re not seeing warnings from the drug makers, because essentially they’re putting profits over people, right?

Sara Papantonio:              Oh, always, all the time though. The liability story here is so good. What we have is we’ve got manufacturers in, international manufacturers, but then you’ve got your, your US companies who have a duty to make sure that that drug is not adulterated. And what I mean by adulterated means it’s not contaminated. That everything is right with the drug. And so by definition, the introduction of a nitrosamine or of a carcinogen makes that drug adulterated. And so as, as a finished dose manufacturers, what we’re calling the US entities, they’ve got a duty to test that drug to make sure it’s safe for consumers like you and me. They’re not doing it. So, so all the time they want to blame these manufacturers who are overseas, but in reality, they have the duty to protect the American public and they’re not doing it. Right. Because it’s too much money. It would cost too much problems. They just want to turn a blind eye to it.

Mike Papantonio:             That’s all for tonight. Find us on Twitter and Facebook @facebook.com/rtamericaslawyer. Watch all RT America programs and DirecTV channel 321 and also stream them live on YouTube. Be sure to check out RT’s new portable app, where you can watch all your favorite shows. I’m Mike Papantonio and this is America’s Lawyer where every week we tell you the stories that corporate media is ordered not to tell because their advertisers won’t let them or because their political involvement doesn’t allow for it. Have a great night.