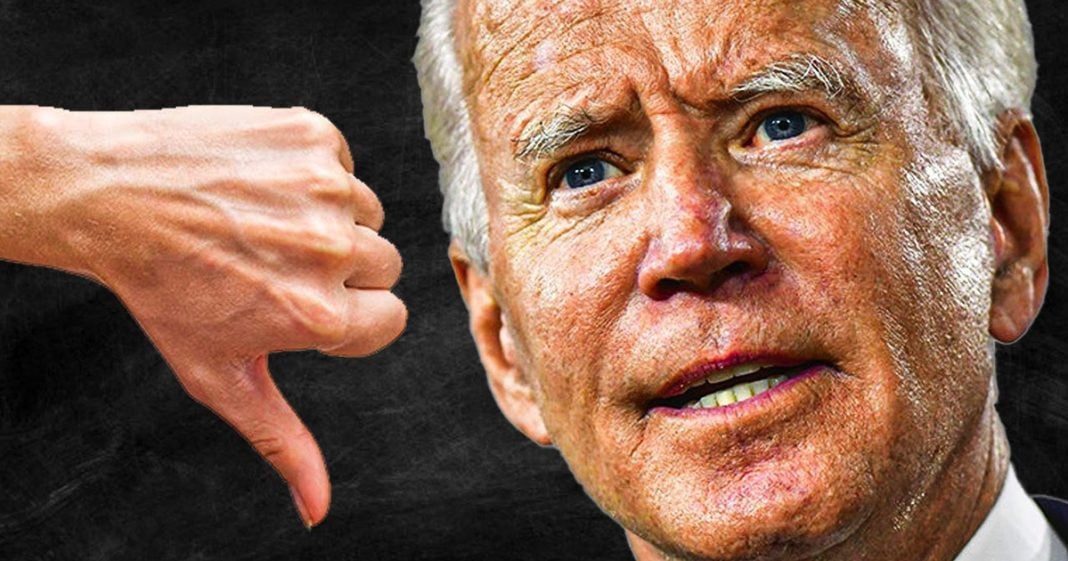 As president Biden’s approval ratings continue to drop, the Democratic party is working on possible solutions to move forward without him on a ticket in the next election. Mike Papantonio and Farron Cousins discuss this.

Mike Papantonio:             As president Biden’s approval ratings continue to drop, the Democratic party is working on possible solutions to possibly move forward without him on a ticket in the next election. Farron Cousins joins me now from trial lawyer magazine, to give you his thoughts. Take, what’s your take on it? I mean, it’s, it is a free fall.

Farron Cousins:                  No, it, it sounds like even worse than what we’ve got. But look, Biden’s hovering on a good poll that just came out, I think 41%, everything else has him below 40 at about 38%. So yeah, the Democrats are wondering, how do we move forward? And so they say, okay, why don’t we take somebody who’s even less popular than Biden, vice president Kamala Harris, who’s at 28% approval.

Farron Cousins:                  Pair her with transportation secretary Buttigieg, and maybe that’s the ticket we run in 2024. That is actually what they are suggesting.

Farron Cousins:                  And look, we’ve got horrendous supply chain shortages right now, which Buttigieg is not to blame for them, but he is in charge of the department that oversees this and people are wondering, what are you doing to make this better? So.

Mike Papantonio:             What are they going to sell. Now, as you look at, if you look, if I’m to distill all of these polls coming in, it centers around cancer culture, I mean, cancel culture.

Mike Papantonio:             Centers around division with, with race division. The notion is that the Democrats are driving. This isn’t me. This is the list that seems to come up. Social re-engineering. That’s, these, these are things that when you read these stories, these all, these things come up. The economy, obviously, perception of Biden’s health, big deal. It, it, from there, it goes on to roll, look at what, look at what went on in Virginia, the role of parents in education.

Mike Papantonio:             And I don’t know that you get to there solving these, these areas with, with saying, oh yeah, Buttigieg and, and Harris are the solution.

Farron Cousins:                  Well, and another big point too, about these polls is the Democratic party in general has lost ground with every single demographic. Okay. This isn’t just, oh, we’re losing the white suburban women vote. No, they are losing. They have lost support among every demographic with every race and that is a massive problem. This is exactly what we saw happen with Republicans after the 2016 election. And of course we saw Democrats sweep into office in 2018. But thanks to some redistricting, Republicans are now statistically only one seat away from the majority in the House because a lot of districts have shifted now. And they have a 10 point advantage in enthusiasm polls. The highest they’ve had in 40 years. They’re going to sweep the midterms possibly by 40 to 50 seats, which is more than the blue wave we saw in 2018 and the Democrats are doing nothing.

Mike Papantonio:             But it’s not, that message is not getting through this morass of problems. They’re not, they’re not hearing, yeah, this is good for us. They’re just not hearing it. As a matter of fact, the, what’s drowning in it now is, is inflation.

Mike Papantonio:             And if I’m to add to this list, cancer, cancel culture, social re-engineering, COVID, yeah, the COVID correctness, I don’t even know. But the, these are things that come up in these polls and they say, what are issues? And the, this is not Republican polls. This is ABC kind of polls. It’s, it’s CBS kind of polls. And you just go, my God, where does Buttigieg or Harris solve this problem?

Farron Cousins:                  And they’re doing the same strategies. You know, James Carville who at one point really was a brilliant, you know, political mind, is just kind of gone off the deep end and it’s the same old, same old with him. He’s got nothing new.

Mike Papantonio:             I mean, he’s just all K street. He’s generating a lot of money for his organization. The advice that he’s giving is deplorable.