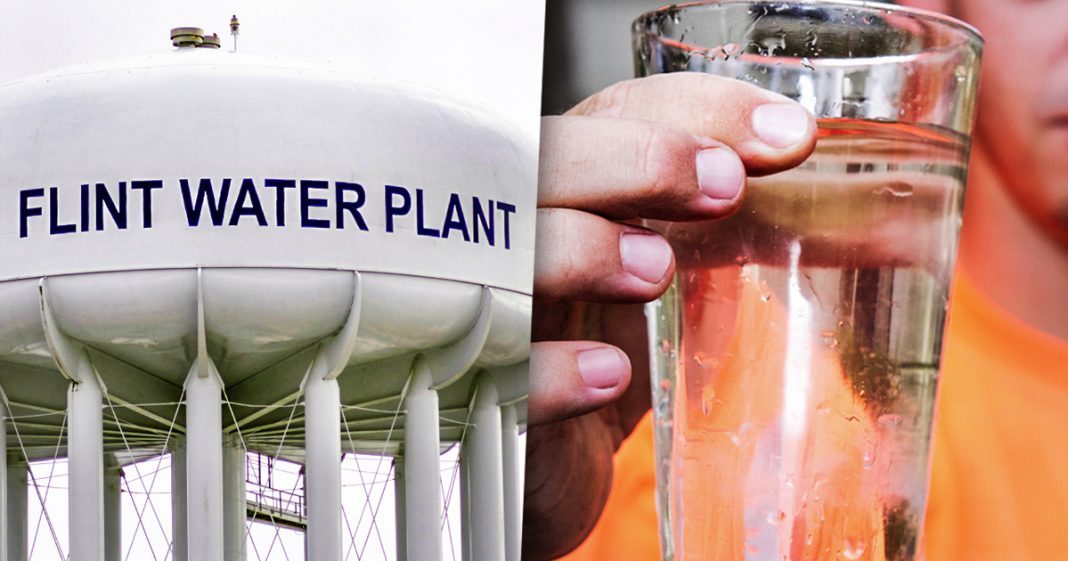 Via News. Views. Hughes: A $626 million partial settlement has been reached between 10,000s of Flint residents and the State of Michigan over the deaths of 12 people and illness or permanent disability in many others when official negligence led to the poisoning of water that residents were assured was safe for human use. It was in fact contaminated with poisonous levels of lead. RT America’s Trinity Chavez reports. Then attorney Sarah Papantonio shares her expertise.

Natasha Sweatte:            A judge has approved a $626 million deal to settle lawsuits filed by Flint residents. They sued the state over contamination of their drinking water by lead and bacteria back in 2014 and 2015, bacteria in the water was blamed for an outbreak of Legionnaires’ disease that left 12 dead and at least 80 sickened. RT’s Trinity Chavez has more on this story.

Trinity Chavez:                    A federal judge has approved a partial settlement that will give $626 million to tens of thousands of Flint, Michigan residents, who for years were impacted by exposure to lead in their drinking water. The settlement approved Wednesday by United States district judge Judith E. Levy as one of the largest in Michigan’s history. Judge Levy wrote in 178 page opinion that the settlement reached here is a remarkable achievement for many reasons, not the least of which is that it sets forth a comprehensive compensation program and timeline that is consistent for every qualifying participant, regardless of whether they are members of a class or are non-class individuals represented by their own counsel. But Michigan’s former mayor says a settlement is far from remarkable.

Trinity Chavez:                    Most of the money, $600 million, is coming from the state of Michigan, which was accused of repeatedly overlooking the devastating risks of switching Flint’s water source in 2014 without treating the water to prevent contamination. At least 12 people died and dozens more were sickened.

Sheriff Paul Bailey:               Cities are getting old and we’ve put lead pipes in long time ago. So this is not going to just happen here. It’s going to happen across the country. These lead pipes are gonna have to be replaced.

Trinity Chavez:                    Flint managers appointed by then governor Rick Snyder and regulators in his administration allowed the city to use the Flint river in 2014 and 2015 without treating the water to reduce corrosion, as a result, lead in old pipes broke off and flowed through the taps.

Gov. Rick Snyder:            People work for me that let us all down and I’m responsible for that, but I’m also responsible for hopefully asking the tough questions and helping find out where those issues could happen. This is one case I didn’t get it, Jim, in terms of finding all those threads and putting them together as fast or the way I would have liked to.

Trinity Chavez:                    Children who were ages six and younger will receive more than half of the settlement while the rest will go to other effected children and adults who can show an injury, businesses and anyone who paid water bills. Attorneys are seeking as much as $200 million from the settlement, but the judge said that will be decided in the future. For News Views Hughes, Trinity Chavez, RT.

Natasha Sweatte:            For more on the matter we bring in Sara Papantonio, associate, associate attorney for Levin Papantonio Rafferty. Thank you so much for joining us, Sara.

Natasha Sweatte:            So Sara, $626 million to be spread out among tens of thousands of people who lost, who knows how many years off of their lives from drinking this tainted water. Is this a fair settlement?

Sara Papantonio:              Well, certainly no amount of money is going to be enough to compensate a child who has been basically poisoned by lead for years. You know, no amount of money is going to be able to compensate these people who thought that they were drinking safe water, but were actually being poisoned by terrible toxins. And from the outside looking in, $600 million looks like an incredible settlement, like an incredible amount of money. But when you divide that number by the amount of people who are affected in Flint, Michigan, it’s going to equate to somewhere between 40 to 80,000 plaintiffs. So while $600 million is a significant amount, when you divide that up, you’re not going to see the, the amount of compensation that a lot of these people deserve. And so that’s why the settlement has some drawbacks, but there’s also a lot of positive aspects to how it was designed that I, that I really do appreciate. I really do appreciate that 80% of this settlement is going directly to those children who were poisoned with the lead. It’s going directly to the children are going to suffer cognitive learning disabilities for years based on the water that they’re ingesting. So while it might not be enough to, to make these people whole or to compensate them fully, it does have a lot of positive aspects to it that I do really appreciate about the settlement.

Natasha Sweatte:            Now, do you think the attorneys are taking advantage of the situation here looking for a large portion of the settlement?

Sara Papantonio:              So, so the way this works with plaintiff’s attorneys is they all work on what’s called a contingency fee and that’s typically 33 and a third percent. And what a contingency means is that the attorney doesn’t get paid unless they’re able to recover for the plaintiff in the end. And like I said, it’s on that 30, 33% contingency fee. So this is what we call a mega fund, a mega settlement. It’s where we have a big pot of money that is said to be divided amongst the plaintiffs. And so what we’re looking at now is, is right up at 33 and a third percent, but what the judge is able to do when we have mega funds like this is they typically reduce that amount of, in fees, between 10 to 30%. So I do anticipate that the judge is going to reduce this, but naturally the attorneys started at that highest level. But it’s ultimately going to be the judge’s decision in this case to reduce that amount based on how she sees fit and based on, and the work the attorney has put into it and based on the plaintiff’s injuries in the long run. So I don’t, I don’t know that it’s necessarily going to stand at that number.

Natasha Sweatte:            I see. And does it surprise you at all that the former mayor is speaking out against this partial settlement?

Sara Papantonio:              No, I can’t blame her for speaking out. Of course, she’s passionate about the people who were affected here. You have 80,000 people who were drinking contaminated water and, and they’re not going to be made whole from this. That’s just the basic truth. This is not enough money to make them full, but at the very least, we have to look at the justice that is being served. Right. We’ve got criminal and civil penalties that were imposed in this case and so we know at the very least that there is some retribution, that there is justice, that, that we’re holding people accountable in this case. Of course we would like to see people compensated fully, but I don’t know that, that that’s a reality of this scenario.

Natasha Sweatte:            Yeah. Good point. Sara Papantonio, thank you so much for your insight.