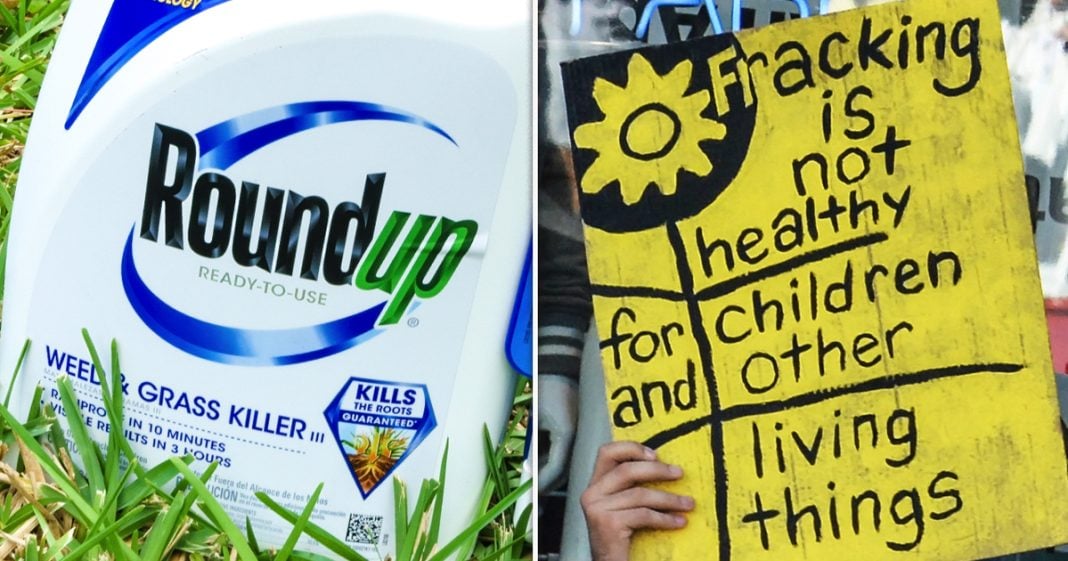 Via America’s Lawyer: Bayer pledges another $2 billion to settle future lawsuits over the cancer-causing weedkiller Roundup. This is in addition to the $10 billion already dedicated to settling existing lawsuits, which number over 100,000. Investigative journalist and author of “The Monsanto Papers” Carey Gillam joins Mike Papantonio to share her personal experience throughout the Bayer-Monsanto debacle, built upon a decades-long cover-up by researchers who downplayed the dangers of their hallmark product. Also, a four-state agency declares a ban on fracking along the Delaware River. Mike Papantonio & Farron Cousins discuss more.

Mike Papantonio:             Bayer has announced it’s going to cough up $2 billion to settle future lawsuits filed by customers who were exposed to their cancer causing weed killer Roundup. How ridiculous, that is just a drop in the bucket of what this should cost. This is on top of $10 billion the company pledged last year to settle existing cases, people that are already dying of cancer. But is it, if I look at the facts, there’s no way that $2 billion part of it is going to work out. But I have with me, somebody who’s followed this case for a very long time and Carey Gillam is an investigative journalist who’s been closely following this litigation. Her new book, The Monsanto Papers takes a deep dive into the lasting impact of the Roundup saga. She joins me now. Carey, we’ve been covering lawsuits from, about Monsanto, as a matter of fact, full disclosure. I’ve actually been involved in the lawsuit. So I know, I know a little, a little bit about it. I think I’ve taken four depositions in this case, but I’m interested to know, you’ve been an investigative journalist a long time. Tell me, tell me what you think are the important talking points here. What do you think? What grabs you about this case?

Carey Gillam:                       Oh my goodness. I mean, this has gone on for so long. Really, you know, what I’ve written about and what so many people have just been stunned by is what the internal Monsanto documents, the discovery documents that came out during the periods leading up to the trial, the three trials. The discovery documents showed us just decades of deception on Monsanto’s part about the safety of its weed killing products Roundup, glyphosate based Roundup. And you know this is, to many of the people who’ve been following the case, you know, Monsanto was shown through its own internal records to be discussing ghost-writing scientific studies and manipulating regulators, manipulating the EPA, and others, and, and really denying and hiding the cancer risk of its weed killing products.

Mike Papantonio:             One thing you talk about in your book is the all-out attack on anybody that would criticize the company. They would take scientists that had plenty of information that was all bad for the company, and they would make that, they’d do everything they could to have that professor or that scientist lose their job. The other thing they would do is hire PR firms and they would take spins by creating these front groups and these fronts, this is, this is what you talk about in your book. Tell me about the front groups. How did that work to where they could tell the American public, nothing to see here? Just keep moving, everything’s okay. How’d that work?

Carey Gillam:                       Yeah, I mean, this was really alarming. You know, this was a network of front groups, organizations that were secretly funded by Monsanto and are secretly funded by, you know, other companies as well, really to do, you know, their dirty work and to go out and to attack, harass, write terrible articles about people like me or journalists at the New York times, or scientists with the international agency for research on cancer, to try to smear and intimidate people. Monsanto made it clear in its documents, they didn’t want it to look like these attacks were coming from them. They wanted it to look like they were independent voices that were, you know, speaking out and calling Carey Gillam a liar or Danny, Danny Hakim had came at the New York Times, you know, a science denier, that sort of thing. But they also engaged in really alarming practices of, of ghost writing articles that appeared in like Forbes magazine or engineering op-eds and editorials and letters to the editors that were being sent to newspapers around the country to talk about, you know, how safe Monsanto’s products were and how wrong scientists were, who associated their products with cancer. And these were all being engineered secretly by Monsanto and we found that out in these documents as well.

Carey Gillam:                       Yeah. I mean that, that really is. Monsanto introduced glyphosate based products, Roundup, and other herbicides in the 1970s and their patent was expiring in the year 2000 and they were looking for a strategy to really hold onto and grow their market share. And they had all this technology and they introduced genetically engineered soybeans and cotton and corn and canola and all sorts of products that were designed to be sprayed directly over the top while they were growing with Roundup. So these Roundup ready crops really helped perpetuate the use of glyphosate based Roundup products. And we saw, and we have seen just this exponential growth of Roundup use around the world. So much so, and I wrote about this in my first book, and it was an issue at trial that, you know, Roundup products, glyphosate based herbicides are ubiquitous. They’re found now in our air, our water, our food, our own bodies. We have a chemical that’s been linked to cancer that, you know, is, is almost impossible to escape exposure to now, at this point.

Mike Papantonio:             Yeah, it’s being found, it’s being found in baby food. It’s being found in beer. It’s being found in cereal. And it all begins with the idea, if you can put these seeds all over the country, all over the, all of the planet, here’s what ends up happening. A farmer say in India gets seeds from Monsanto. And once he gets the seeds and plants those seeds, he then has to do business with Monsanto going forward because he can’t move from the geo seed to his regular seeds. And it’s shocking that we, we’re missing the whole point here that this is about Monsanto saying, we’ve got this whole world crisis of food, which was a lie. And they said, we can create more food by this seed and by using this awful thing called Roundup. That’s the way I see this, my, my 10,000 takeaway on that and I said, I’ve been working this case a long time. Do, do you disagree with that? Would you, would you add anything to that?

Carey Gillam:                       No. I mean, that’s very, definitely a very big part of the evolution of this story and how this chem chemical came to be so widely used and how we have now a hundred thousand people in the US who have claims against Bayer, which bought Monsanto in 2018, alleging that they developed non-Hodgkin lymphoma from exposure to Roundup. And so, you know, as you mentioned, Bayer has agreed to pay at about $10 billion to settle those cases. They’re trying to get a deal to pay 2 billion, to settle future cases. The company has lost a lot of market share and a lot of investor confidence because of all of this. You know, it’s a very big corporate story. It’s a very big public health story. And it’s a very tragic story about what happens when corporations, you know, push out these products and regulators do very little to rein them in.

Mike Papantonio:             Carey, The Monsanto Papers was very well done and I want to have you back on where we can, there’s so much detail here. There’s so much to this story. But I want to thank you for your first book, Whitewash was excellent. And now we have The Monsanto Papers out there. Everybody should read this if you want a real close look at how things work in corporate America, sometimes. Thank you for joining me, Carey.

Mike Papantonio:             That’s all for tonight. Find us on Twitter and Facebook @facebook.com/rtamericaslawyer. You can watch all RT America programs on DirecTV 321 and also stream them live on YouTube and be sure to check out RT’s new portable app where you can watch all your favorite shows. I’m Mike Papantonio and this is America’s Lawyer where every week we tell you the stories that corporate media is ordered not to tell because their advertisers won’t let them. Have a great night.