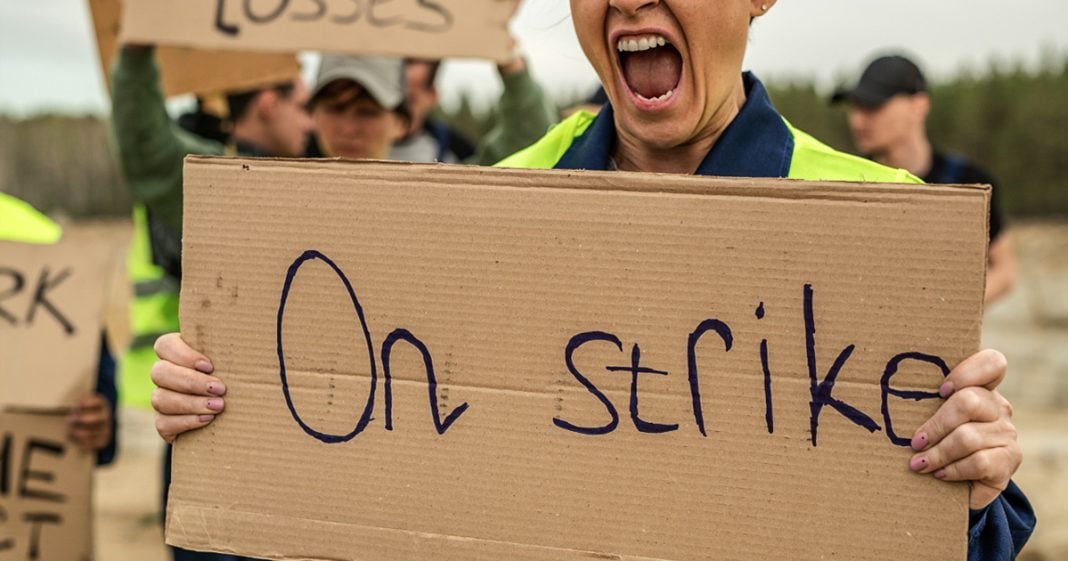 Via America’s Lawyer: Over half a million workers walked out of their jobs last month in what’s being called “Striketober.” This was the culmination of a pandemic which reshaped the way Americans view their livelihoods. Filling in for Mike Papantonio this week, Farron Cousins is joined by RT correspondent Brigida Santos to explain what’s next for the little guys who have had enough of big business.

Farron Cousins:                  Workers have been striking for better pay, benefits and conditions, forcing employers to meet some of their demands. Brigida Santos joins me now with the story. Brigida, how have labor strikes and holdouts impacted wages?

Brigida Santos:                   Nationwide labor strikes, historic resignations and holdouts on filling job openings have given workers in America the upper hand for the first time in 20 years. Now, between July and September of this year, wages jumped at the highest rate in two decades. The labor department reports that during the third quarter of this year pay increased 1.5% and that’s slightly higher than the rate of inflation during that time, which was 1.2%. Now, when you zoom out and look at data from the past 12 months, lower wage workers have seen the highest jump in pay with wages for restaurant, bar and hotel workers, rising 8.1% and pay for retail workers increasing about 5.9%, Farron.

Farron Cousins:                  So, you know, one thing we see right now, obviously we do have a lot of inflation. Part of that is coming from all these supply shortages. So while it’s great that workers are making more, wages are going up. Are these new higher wages enough for workers to make ends meet?

Brigida Santos:                   No. Even with pay gains, many workers across the country still are not earning a living wage, which MIT defines as the minimum income standard between the financial independence of the working poor and the need to seek out public assistance or suffer housing and food insecurity. For example, MIT’s living wage calculation for California, which is now tied with Nevada for the highest unemployment rate in the country, shows that a single adult with zero children must earn at least $18.66 per hour to support themselves, or at least $40.34 per hour to support themselves and one child. California’s minimum wage currently stands at just $14 per hour and across the country most states are equally failing to provide sufficient income standards for low wage workers. And we really saw this issue come to a head in August when a record number of US workers, over 4 million, just quit their jobs in search of better ones.

Farron Cousins:                  You know, and a lot of it too is, is with these striking workers and again, we’re talking tens of thousands of people that are still on strike right now. It’s not only about the wages for a lot of these folks. You know, we do have them, some of them simply wanting better conditions at their factory. The John Deere factory, for example, these striking workers that we have across the country for John Deere. This is backbreaking labor for these individuals. They’re putting tremendous strain on their bodies. They have back problems. They have knee problems. They have hip problems. These are problems that are gonna persist for their entire lives. So again, it’s not only, I know a lot of people see strike, they think, oh, they want better pay. That’s a huge, huge part of it. But we also have the physical demands on these people’s bodies. The other benefits that they want to be compensated for, paid leave, time off, things like that. So that’s another huge part of it. But also, Brigida, we’re now seeing bipartisan support for the labor movement. So tell us what these new polls reveal.

Brigida Santos:                   Sure. A new poll by data for progress on behalf of the American federation of labor and congress of industrial organizations reveals that the majority of voters support these recent labor strikes, regardless of party affiliation. At least 60% of Republicans and 87% of Democrats approve of the strikes that swept across various industries in October. The labor movement is not stopping. Workers from factories, healthcare, manufacturing, transportation and so on say that they’re going to continue standing up for higher pay, health better benefits, and of course, better working conditions, as you just mentioned.

Farron Cousins:                  Well, let’s hope that these strikes continue. I know there’s a lot, a lot of ground that needs to be made up for, for basically, you know, four to five decades of workers being mistreated by corporations. The wealth gap is still absolutely, you know, just atrocious in this country. But none of that changes without these people getting out there doing these strikes. So, so I wholeheartedly support what happened, you know, through the month of October now carrying into November. I hope it continues. I hope these workers get everything they need because the rising tide is going to lift all the ships. Brigida, thank you so much for talking with me today.