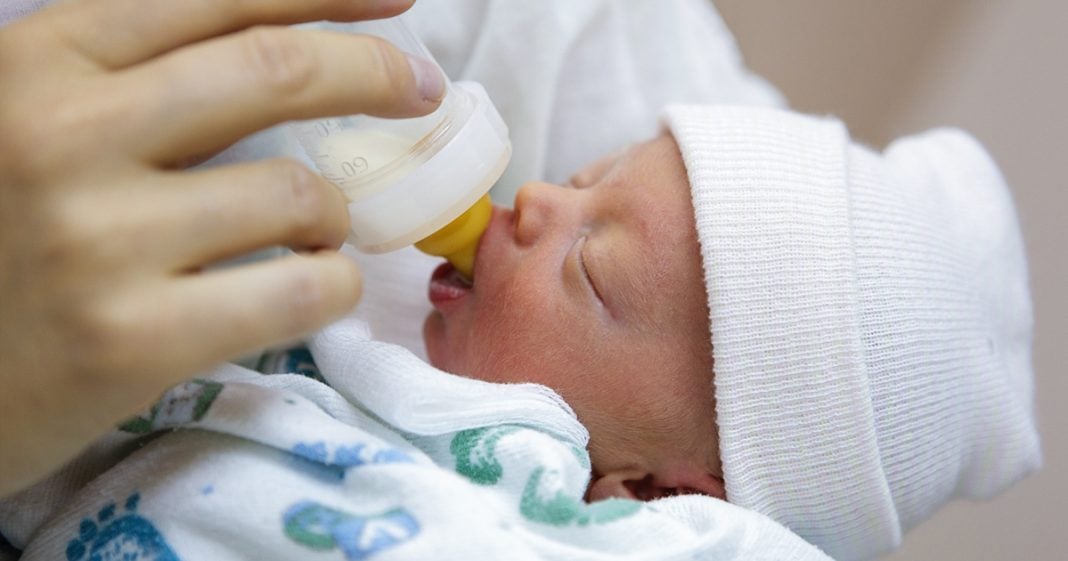 Via America’s Lawyer: It’s not uncommon for babies to be born prematurely, as U.S. delivery rooms see over 300-thousand preemies a year. What is shocking though, is how certain brands of popular formulas are endangering the lives of these infants – yet are still being sold on store shelves. Filling in for Mike Papantonio this week, Farron Cousins is joined by attorney Sara Papantonio to discuss lawsuits filed against the manufacturers of Enfamil and Similac, which failed to disclose the dangers of feeding their formula to preemies.

Farron Cousins:                  It’s not uncommon for babies to be born prematurely, as delivery rooms see over 300,000 preemies a year. What is shocking though is how certain brands of popular baby formulas are endangering the lives of these infants yet are still being sold on store shelves. Attorney Sara Papantonio joins me now to talk about this. Sara, let’s start at the beginning here, obviously. What problems are we seeing with these infant formulas with regard to the premature babies?

Sara Papantonio:              Right, and it’s important that you highlight that the problem lies with premature babies. We’ve got companies like Abbott and Mead who produce infant formula and they give those, that infant formula to hospitals with no instructions, no warnings, no nothing. And so hospitals then feed that formula to all the babies. But what the years and years, if not decades and decades, of science tells us is that preterm babies can’t digest that specific formula and the reason they can’t digest it is because it’s made of a cow’s milk enzyme. So when you talk about preterm babies, we’re talking about babies who are born between 24 weeks and 37 weeks. Their, their systems haven’t developed, right? They don’t have those digestive enzymes that can take in that cows milk like a normal term baby could. So that’s why we’re seeing preterm babies develop necrotizing enterocolitis, which is just a really, really terrible disease, which causes the, basically, the baby’s organs to shut down and break down.

Farron Cousins:                  And, and with the, you know, you said about 24 months to 37 months, 24 months is about as early as a child could be born and still be viable. So, so we’re talking about babies in some instances that, you know, maybe four months out of the womb before they should have been. So that’s a big problem. So how serious is the condition though? This necrotizing enterocolitis. I mean, this, from what I’ve seen is pretty terrible for these babies.

Sara Papantonio:              Right. What we know about those little baby infants, who, who barely have a fighting chance already is that they’re predisposed to what we call necrotizing enterocolitis. I’m going to call it nec for short. And what that is is like I said, the organs break down, but they break down because they’re small, they cause small perforations within the intestines, which causes bacteria to leak into the body and causes the baby’s organs to shut down and often results in death. What we see is that that preterm infant formula advances that nec, it causes that nec and it can cause it within a matter of hours when these babies are being fed this formula. And it’s just something that these manufacturers are not telling hospitals and doctors. In fact, they’re even advertising it to hospitals and doctors as being suited for preterm infants, which is just absolutely absurd when you really take at a look at the science and, and the studies that have happened since the 1990s that tell us, do not give this stuff to infant preterm babies.

Farron Cousins:                  And, you know, that’s an interesting point to make too. This isn’t something we’ve just discovered. Well, we’ve discovered, you know, the, some of the problems here, but the studies are going back to, to the nineties. So we’re talking about, you know, 30, 35 years at this point that, that we knew this could be a potential problem. The problem is getting worse. So what did the companies know? If the independent studies were out there in the nineties, what, what were the companies thinking?

Sara Papantonio:              There’s no question that the companies know this. But here’s the, here’s the business model of companies like Abbott and Mead. What they do is they supply hospitals with one type of a formula, like a Similac or an Enfamil. They don’t warn about who should be getting this formula or not. They just give it to the hospitals, the hospitals then give it to the mothers, right? Because they want the mothers to have it for free in the hospital so that they later become almost an addiction type thing where the babies become addicted to that type of formula and continue to use it. The problem is, that works for, for healthy, normal term babies. For preterm babies, the science tells us do not give it to preterm babies. But what you won’t find on that little baby infant formula is, is saying, do not give to preterm babies. In fact, they’re advertising it to treat preterm babies. It’s absolutely absurd and the fact that it has gone on for now 30 years is, is just unbelievable to me.

Farron Cousins:                  Well, and, and so with this necrotizing enterocolitis, it’s not only caused by the formulas, but we’re seeing when babies get this, the premature baby, premature baby, excuse me, it’s about a 50% survival rate. So, so this is an exceptionally serious condition. Only about half of the infants who develop this survive. Versus I think when you have a regular term child, the survival rate is up to 90 percentage. But we’re also, and there was a great study here. This is from, you know, the, the journal nature, a lot of giant words in there that I know the audience probably doesn’t want to hear. But to just kind of break it down for everybody, let me just say this. They don’t see these problems as frequently, you know, when we’re using human milk. What we’re seeing it is the formulas based on cows milk. And they saw the same thing in rat studies. So they’ve known this, they have known that it does this in the animals, like, okay, we see it here. We’re seeing it here. So really there’s, there, there shouldn’t be any doubt that this is obviously happening.

Sara Papantonio:              And yo go even further, you don’t even have, have to dissect those kinds of confusing studies. The surgeon general, the pediatric associations in about 2010, 2012, came out and said, human milk is the best milk for preterm infants. Do not give preterm infant cows based formula.