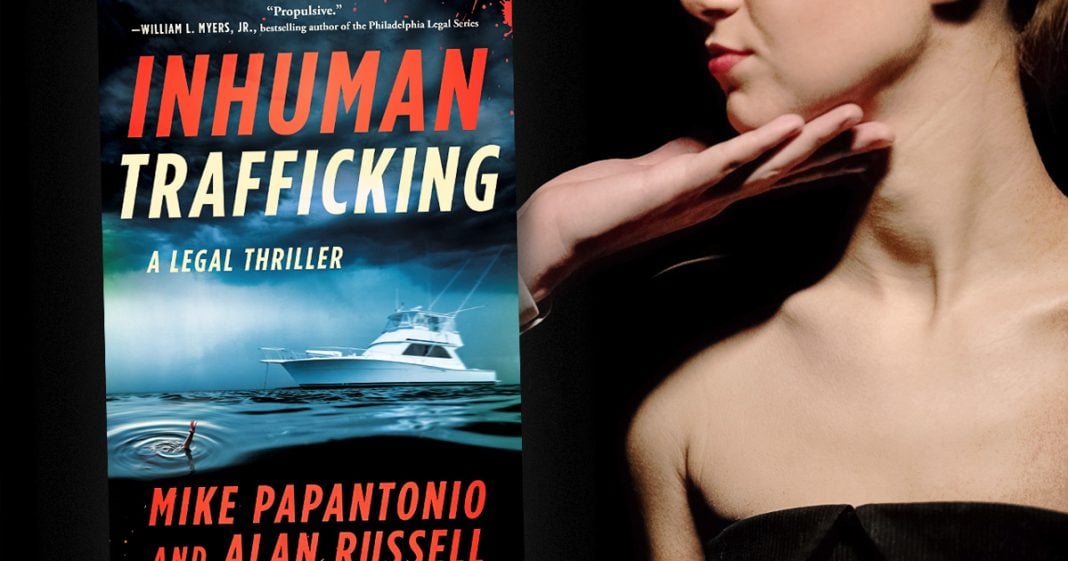 Via Philadelphia Community Podcast: Legendary Attorney Mike Papantonio has worked on major cases targeting wrongdoing by Big Pharma, tobacco, weapon manufacturers, and the automobile industry. He’s also written a series of legal thrillers informed by his work. Papantonio’s latest novel “Inhuman Trafficking” is based on a current case which addresses the 150-billion-dollar human trafficking business. The novel co-authored with Alan Russell shines a light on the complicity of some major businesses and corporations.

Click here to order a copy of “Inhuman Trafficking.”

Loraine Ballard:                 I’m Loraine Ballard Morrill. Mike Papantonio is one of the few living attorneys inducted into the trial lawyer hall of fame. He’s a TV host and commentator, and has worked on major legal cases, focused on big pharma, tobacco weapon manufacturers and the automobile industry. He’s also the best-selling author of legal thrillers informed by his cases. Mike’s newest book, “Inhuman trafficking,” who he has co-authored with Alan Russell is based on the case about human trafficking that he’s working on. And the book is in the tradition of the legal thrillers of John Grisham. Thank you so much for joining us today.

Mike Papantonio:             Well, first of all, it’s emerged as a $42 billion a year business, and we have a real misconception about what it is. What we focus on with the lawsuit that we filed, it’s a national lawsuit that’s going to hopefully drive this entire litigation, is the corporate side of it. The idea is we think that most of the time, it’s just one individual who traffics two or three girls. Very, very different. As a matter of fact, this, this book, one of the models that it uses is the trucking industry model, where we find that, that women are, girls mostly 14, 15, 16 year old girls, are trucked from LA to, to the East Coast and up the Eastern seaboard. And what they do is they, they, they take a semi, they break it into maybe six or seven different little rooms. They stop along the way at truck stops.

They say, we’re coming, we’ll be there at three o’clock, everybody converges on that truck stop. And, you know, has sex with these minors and, and leaves. And, and to understand that it, it, you don’t do that, one person doesn’t do that. It takes a lot of cooperation. It takes cooperation of the truck stop. It takes the people that are organizing the logistics of the trucking process. So it’s very different from what most people think, Loraine. Another case that this book focuses on, happened 60 miles from us, where they brought in H2B workers from, from the Ukraine. Told them that, how would you like to work in the service industry, come to the United States and we’ll, we’ll, we’ll teach you how to do that. And they have something called a step up process. It’s used very often in this, in this business, where they hire them as a, maybe a greeter at a restaurant.

Loraine Ballard:                 Well, you know, that is really one of the reasons why you write these books, because it’s an opportunity to shed light on some very important issues that are not often, or maybe as well reported as we would hope they would be. And that brings us to your book, “Inhuman Trafficking.” So let’s talk about the, the plot really does reflect the case that you were just talking about. Tell us more.

Mike Papantonio:             Well, the plot centers around several different parts of human trafficking, and every part that it centers around is actually part of a case that we’re handling. The, the, what I’ve tried to do and this is, I try to do it with every book. Corporate, corporate media in a lot of ways has become somewhat dysfunctional and I can say that because I’ve worked corporate media for a lot of years, I’ve done MSNBC, CNN, liberal commentator for Fox. I’ve basically done the spectrum. And what’s happened is advertisers have taken control of what’s delivered in corporate media. So if I were to go on the air and I would say, you know, I really want to talk about this hotel chain because this hotel chain understands exactly how they’re enabling all this, that it would be impossible. I mean, I, I’ve, I have been on so many, so many times where I’ve been, you know, the tease coming up, Mike Papantonio talks about Bayer corporation. In between the tease and actually going on the story is killed because that particular entity, that corporate media gets advertising dollars from Bayer.

So, you know, it’s the same thing here. We, we’ve run into the same thing here. The corporate media has done a very, very poor job having people understand what’s happening here. The opioid case that I have going on right now, we filed that one too. We started the opioid litigation in this country and after we did people started paying attention. And, you know, out of that, out of that came a book called “Law and Addiction.” So this is the same pattern. It’s the same pattern that I use, you know, regularly, and I’ve done it for, for many years. So my hope is they read the book, they’re entertained. They say, you know, that certainly grabbed my interest, but they learn something about the, about the trafficking industry that they didn’t know. And all of that that’s in there is absolutely true. It’s all based on actual facts that we have uncovered in our, in our litigation. And, and I think that’s, that, that makes it a little more interesting because you know your takeaway is that you learned something.

Loraine Ballard:                 Well, I guess the, the additional aspect about your book is that not only does it inform you about the overall issues, but it also brings it down to the human cost because you’re talking about actual characters in this novel that you write that, that reflect the reality of what it’s like to be swept up into this horrible situation.

Mike Papantonio:             Yeah. Well, for example, it centers in heavily in Las Vegas, they, you know, people don’t understand there are hotels and casinos that keep, there’s a floor that they keep in many of these casinos in Las Vegas where they have their high rollers come in and the high roller has access to these girls. And it, it, it takes so, so a lot of the books centers around what’s going on in Las Vegas. What’s going on in, right down in Florida, where, where the trafficking begins. And, and the point being is if we will just pay attention, we come away and we say, well, maybe there’s something I can do, might be a little, but maybe there’s something I can do. So my hope for the book is to, you know, be able to read it sitting on the beach maybe in an afternoon and come away and say, wow, I didn’t know that.

Loraine Ballard:                 Well, you have taken on some pretty big cases that really speak to the connection between corporate greed and, and some of these horrendous situations like the opioid epidemic and certainly human trafficking. You seem to have chosen a particular direction in your legal practice, which is, you know, basically trying to right some wrongs. And I wonder if you can talk a little bit about what is it that drives you?

Mike Papantonio:             Well, I mean, the, first of all, you have to have a, you have to have a setting that where the organization has the ability to do that. We, I don’t know whether you knew this or not, but we initiated the tobacco litigation in this country. The law firm is 67 years old. And so we started that litigation and it gave us, it gave us the ability to do a lot of other things. Look, here, here’s, here’s how this works and people they’re just, they, they, sometimes aren’t aware of the facts. Most corporations want to do, they want to do a good job for us. They want to make our lives better and they do, they do a tremendous thing, but then there’s this other, they’re the outliers. They aren’t the norm. They’re not the majority. These corporations who are aberrational in the way that they treat people and the way that they, the way they evaluate what their role in society is.

And, you know, most of this, most of these cases, Loraine, I’m sitting across the, when I’m taking a deposition or in trial, I really am across the, the table from a sociopath. I mean, they don’t look like one, because they’re, they’re dressed up in Armani suits. They have Rolex watches on. They, they’ve driven up in a, in a Bentley. They have an MBA from Yale or Harvard. They don’t look like that child out on the street corner with a hoodie on selling marijuana. So we treat them differently. For example, I can’t, the number of lives that have been lost in human trafficking is staggering. A child that goes in is, is trafficked at age 15 will not even make it to 19. They will commit suicide. It’ll be homicide. It’ll be drug overdose. It’ll be sexual diseases that kill them. Opioids, same thing, 150 people a day dying from opioid addiction.

And so how, how have we gotten to the point to where we say these people aren’t, this isn’t manslaughter, you say, somehow this isn’t manslaughter and we look at it and we say, we, we, we kid ourselves into believing that something’s different because that CEO looks different. You know, he doesn’t look like, he doesn’t have a hoodie on. And so we have to change that culture and every time I write a book, that’s my goal, to get people to think a little bit differently about this double standard that exists in this country. And it, it’s, it’s white collar crime. And I haven’t seen an attorney general in the last, in my, in my adult life that has seriously taken on this issue. Every time you think that, yes, they’re going to come through, they’re a miserable failure in their effort to try to curb what happens on Wall Street. What happens with corporate America when they do bad, sometimes you have to perp walk them, and they’re not willing to do that.