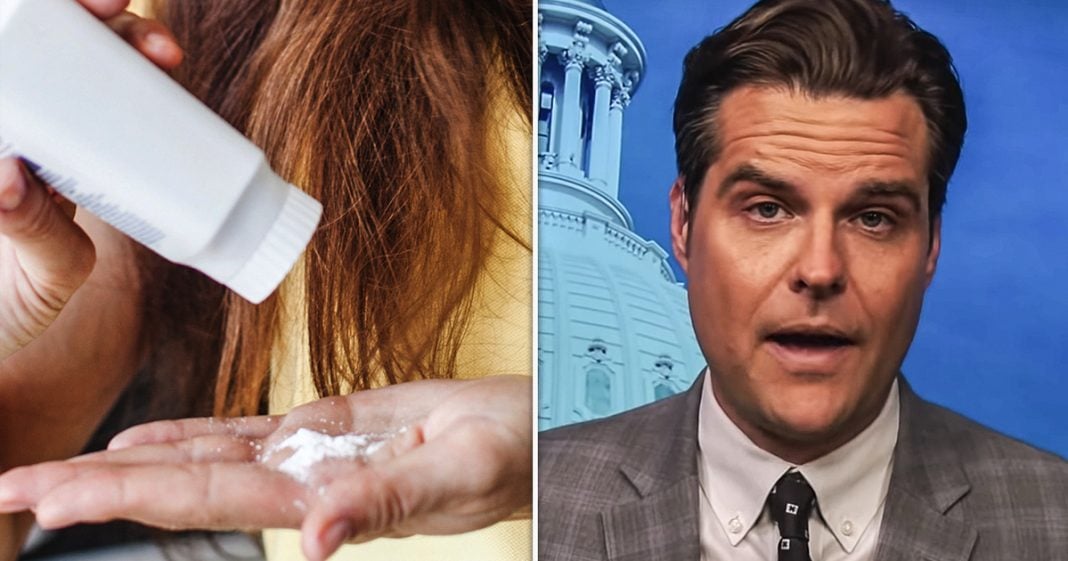 Via America’s Lawyer: Johnson & Johnson attempts to file for bankruptcy to fend off tens of thousands of cancer lawsuits regarding its talcum products. Also, the investigation into FL senator Matt Gaetz ramps up as the DOJ hires prosecutors focusing on child exploitation and public corruption. Mike Papantonio and Farron Cousins discuss more.

Mike Papantonio:             Johnson and Johnson is trying to fight talcum powder lawsuits by declaring bankruptcy. It’s a common move for corporations nowaday, nowadays, who are trying to escape paying for their crimes and their conduct is absolutely criminal, it’s manslaughter. I have Farron Cousins from the trial lawyer magazine to talk about this. Farron, you know, the shortlist is unbelievable. The opioid case that’s going on. They, they participated in killing 150 people a day. Their product was part of the problem. Their shareholders have sued them time and time again for fraud, for bribery of foreign officials, for phoning up, phony up clinicals, making stuff up, just completely changing. It goes on forever. And then of course, baby powder, pick it up from there. The other stuff, I mean.

Farron Cousins:                  Yeah, I mean, when, whenever we talk about these corporate problems, you know, oh, this company did this, this company did that, Johnson and Johnson has basically done it all, seen it all, perfected it all and that’s what we’re looking at here. And especially with these talcum powder lawsuits where you’ve got these fibers in there, the asbestos fibers, the company knew this was happening. And instead of doing anything about it, they came up with deceptive marketing practices where they targeted, you know, minority women in poor neighborhoods. You know, that is a huge part of this, but overall, they knew their talcum powders were causing ovarian cancers in women. Did nothing about it. And now that they’re facing just a couple billion in lawsuits, really, I mean.

Mike Papantonio:             And, and Congress allows it to happen and our president, I, I don’t know whether sleepy Joe just is completely out of the program, his advisors I’m sure are telling him to. I would not trust a Johnson and Johnson anything. I’ve been to trial with them. I’ve seen how they phony up clinical data. It’s like just part of the culture. If I go into a case and I, I’ve been in this, I’ve been in six cases against this company, major cases, where they have absolutely phonied up clinical data. And our president says, oh, this, this is, this is my choice. Really? I can’t even understand that. I can’t even get my arms around it. It’s like, he’s so disconnected with issues like this.

Farron Cousins:                  Right. And we have, you know, plenty of other decent vaccines out there that we could be going with instead of sending 17 million of Johnson and Johnson’s over to Africa. But you know what, that’s typically what we do here in America. Whenever we have a bad pharmaceutical or one that we’re not so sure of we send it to Africa.

Mike Papantonio:             I, I tried one, it was called Factor VIII, that was killing people by the thousands. It was infected with HIV virus. So after they took it off the market here, they shipped it to Africa. They shipped it to South America. It killed thousands of people. This is, this is just not look I told my entire family do not get Johnson and Johnson. Do not get that vaccine. There are plenty of others. Get a vaccine, but don’t get Johnson and Johnson because they have such a nightmare history and that’s just the truth.

Farron Cousins:                  Yeah. And their vaccine is the least effective out of all the ones out there anyway. So there’s, there’s much better alternatives right now, especially as people start with their booster shots, you know, go to Moderna, go to Pfizer.

Mike Papantonio:             Oh, for sure. The only person paying attention to this big scam that these corporations are doing. Kill a bunch of people. You can have $130 billion like Johnson and Johnson has, and you can declare bankruptcy, and you don’t have to pay for all of them. It’s manslaughter.

Mike Papantonio:             They knew, it’s the equivalent of manslaughter. There’s no difference. These cats should be locked up, not declaring bankruptcy and trying to avoid their liability. But you know what, it’s business as usual in America.

Mike Papantonio:             Congressman Matt Gaetz isn’t out of the woods yet as the investigation into possible sex trafficking took an interesting turn last week. I want to tell you something. I have gotten more people that have called me and emailed me and said, you’re reporting on the Matt Gaetz issue is the best that they have found, across the board. And I’m not just talking about one or two, I’ve gotten a letter, email phone calls. So you pick you, you tell this story, okay.

Farron Cousins:                  The big bombshell last week and we got new Matt Gaetz news almost every day in this past week. Biggest one is the DOJ has added two prosecutors for the case that are experts in psychological manipulation of trafficking victims. So we don’t know for sure, obviously, but what is being speculated by these experts is that they brought these prosecutors in to talk to the witnesses, to talk to the women that were paid by Matt Gaetz and other men to find out if they use those payments, like Matt Gaetz did for tuition or gas money, as a form of coercion to perform sexual favors on them. And that is a huge, huge thing and obviously Greenberg got an extension on his.

Mike Papantonio:             They’re looking for specific intent. You can’t just say, you know, you gotta have, you gotta prove intent.

Mike Papantonio:             So you bring in an expert that says, let me tell you what the intent is, at least to get past that first part where you can get to the jury, you got to get to the jury. So the Department of Justice is looking at what it is, what is it that we need to, to call, to question, to make a jury fact and you’re saying they’re experts that they can do this. Right?

Farron Cousins:                  Right. And, and Greenberg has already turned over, it’s thousands of documents, photographs and videos. And it includes the actual receipts. You know, the, the things Matt Gaetz and other men paid for through Greenberg. And so, because he’s continuing to cooperate, sentencing has been pushed to March of next year now, because he’s giving them gold.

Mike Papantonio:             Okay. So in human trafficking, this issue that you’re talking about, it’s, it’s subtle manipulation. It works. It, it, it causes some of these young, young women to, you know, to, to be trafficked. That they, they are experts at manipulation. And you’re saying at this point, the Department of Justice is going down that road. Their goal, obviously, is to say, judge, in trial we’ve given you enough information. It at least as a jury question, right? On intent.

Farron Cousins:                  Right. Absolutely. And, and this is, I forget the technical term, but it’s almost like a hero, a, a savior type relationship that the individual has with the women who are trafficked. They come in, the woman’s down on her luck and he says, don’t worry. I’m here to help you. I’m not taking advantage. I’m paying for your college. I’m paying for movie. I’m going to take you on a wonderful vacation. And the woman then feels compelled, you know, manipulated, to do what has been accused.