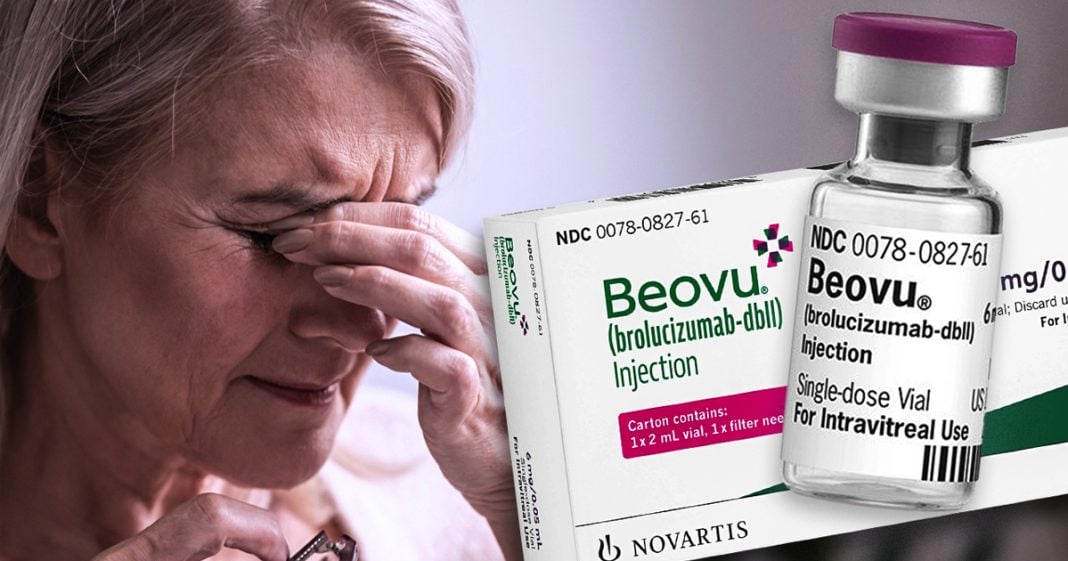 Via America’s Lawyer: Beovu is a popular injection used to treat age-related macular degeneration. But the medicine has been shown to actually cause permanent vision loss and blindness. From the Mass Torts Made Perfect conference in Las Vegas, RT’s Brent Jabbour fills in for Mike Papantonio, to talk with attorney Joshua Harris about Novartis’s aggressive marketing campaign that pushed such a dangerous drug through the FDA’s approval process.

Mike Papantonio:             Beovu is a popular injection used to treat macular degeneration, but the medicine has been shown to actually cause permanent vision loss and blindness. Brent Jabbour also interviewed attorney Joshua Harris at the aggressive marketing campaign that’s being ignored and he’s ignoring the risk of this new product.

Joshua Harris:                     Well, Beovu is a eye injection for macular degeneration produced by Novartis. It received FDA approval in October of 2019 and since then there were about an estimated 60,000 vials of this that were prescribed. Now, what Novartis did was they had a heavy marketing campaign for this and they were going against their competitors, Eylea and Lucentis, which require numerous injections throughout the year to treat AMD age-related macular degeneration. What Novartis did was they claimed that their drug was just as effective with half the number of injections, which was appealing to doctors and patients because the less times they had to get jabbed in the eye with a needle, that seemed more effective. But what we learned was that they lied on their clinical data to the FDA, the FDA didn’t catch it and now they were forced to have a label change in June of 2020.

Joshua Harris:                     No, and in fact, they were seeing such high adverse event rates compared to the safer alternatives and the other two drugs that were already proven effective on the market. So what happened was, Novartis then had to do a label change because the American society of retinal specialists went back and did a safety review on Novartis’ clinical trial data. And what they learned there was that Novartis severely underestimated and severely underreported the number of adverse events to try to make their drug more effective and safe so they could get a good label from the FDA. And the issue is the FDA doesn’t test these drugs, they get, they get it from the drug company. So if they underreport or misreport then the FDA just goes with what they’ve got.

Brent Jabbour:                    And, I mean, and the fact that they lied on the data, maybe I’m saying lied is the wrong word, but misrepresented their data to the FDA. I mean, that seems like, you know, that doesn’t even need attorneys. The FDA should be taking care of that directly, right?

Joshua Harris:                     Well, you, you would think so and they’re, they’re forcing them to change the label, but that’s not enough. In fact, the problems have persisted so much that in May of this year, 2021, almost two full years after the drugs on the market, Novartis has completely stopped phase three clinical trials because it’s so damaging that they don’t even feel comfortable testing it on people for these clinical trials. So unfortunately the FDA has not done enough to do anything about this. So, you know, our law firm stepped in and we’re representing folks who have suffered and, you know, people are going blind in the worst cases and losing vision and having inflammation and all sorts of other injuries and eye problems.

Joshua Harris:                     You know, the drug was only on the market for a short period, but because of the aggressive marketing campaign, like I said earlier, there’s an estimated 60,000 bottles of these that have been sent out and an estimated about 40,000 people that have probably received Beovu injections. So, usually these adverse events that we’re seeing happen fairly quickly after there’s injections. So I don’t know the full extent, but I’m sure there’s gotta be tens of thousands of people who’ve been effected by this out there.

Joshua Harris:                     Absolutely. I mean, if they took the time to do what they wanted to do and make a safe effective drug, they could have done that. They could have reported this to the FDA and been honest and open. But instead they cut the corners so they could get this drug on the market and sell it. And in the first quarter alone it was on the market, it made $68 million. So their, their lies and their marketing campaign were effective for them. They, they made money off this.

Brent Jabbour:                    And how, I mean, this may not be a question you have an answer to, but I’d love to hear your opinion on this. This, the fact is, is that, you know, like we’ve said, we, we hear about this over and over again, that the FDA essentially puts the ball in the court of the drug maker to do the research and give us the trial data and that’s how they make their decision. Is that the best way to do this when we see so many problems with drugs as we go through this?

Joshua Harris:                     No, and, and the FDA is severely overworked, overextended and under supported, and the problem is that they’re hoping and praying that these companies that want to make money, do the right thing to make that money. But I’m sure you’ve seen it before, the corporate greed, it’s too easy to worry about the bottom line and not worry about the end user.

Joshua Harris:                     So, litigation has commenced, at least our firm has filed a few cases in the district of Nebraska that have survived motion to dismiss phase. So we’re getting ready to start serving discovery and start getting documents from Novartis and we’re confident that when we see those, it’s going to show the true extent of what they knew when they underreported these issues to the FDA. And then we’re, we’re pushing for an aggressive trial date.

Joshua Harris:                     So a label change, the two specific injuries are retinal vasculitis and retinal vascular occlusion and blindness. The label originally in October, 2019, when Novartis said, hey, FDA our drug’s safe, our drug’s okay. Here’s the few issues you may have. It may burn, redness a few days afterwards. Didn’t say anything about the severe issues that we’ve seen pop up in people. So label change now requires Novartis to say, oh, well, in addition to these other things, you may go blind, which a lot of patients and a lot of doctors would say, well, it’s not worth it. And they would have bypassed it, which means that Novartis would have sold less and made less money.

Mike Papantonio:             That’s all for tonight. Find us on Twitter and Facebook @facebook.com/rtamericaslawyer and stream us live on YouTube. Be sure to check out RT’s new portable app, where you can watch all your favorite shows. I’m Mike Papantonio and this is America’s Lawyer where every week we tell you the stories that corporate media is ordered not to tell because their advertisers won’t let them. Have a great night.