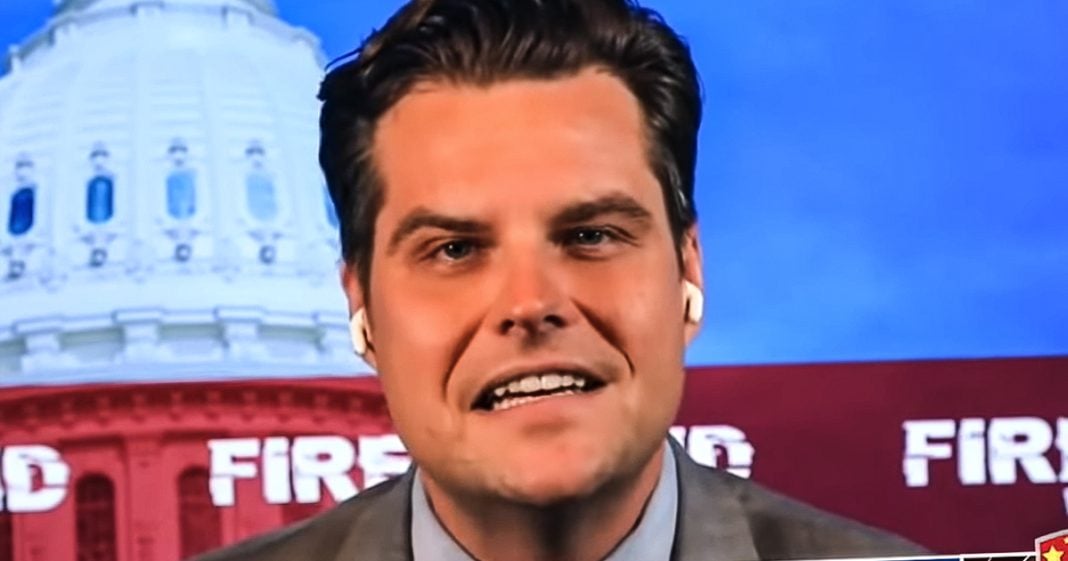 Mike Papantonio:             Congressman Matt Gaetz isn’t out of the woods yet as the investigation into possible sex trafficking took an interesting turn last week. I want to tell you something. I have gotten more people that have called me and emailed me and said, you’re reporting on the Matt Gaetz issue is the best that they have found, across the board. And I’m not just talking about one or two, I’ve gotten a letter, email phone calls. So you pick you, you tell this story, okay.

Farron Cousins:                  The big bombshell last week and we got new Matt Gaetz news almost every day in this past week. Biggest one is the DOJ has added two prosecutors for the case that are experts in psychological manipulation of trafficking victims. So we don’t know for sure, obviously, but what is being speculated by these experts is that they brought these prosecutors in to talk to the witnesses, to talk to the women that were paid by Matt Gaetz and other men to find out if they use those payments, like Matt Gaetz did for tuition or gas money, as a form of coercion to perform sexual favors on them. And that is a huge, huge thing and obviously Greenberg got an extension on his.

Mike Papantonio:             They’re looking for specific intent. You can’t just say, you know, you gotta have, you gotta prove intent.

Mike Papantonio:             So you bring in an expert that says, let me tell you what the intent is, at least to get past that first part where you can get to the jury, you got to get to the jury. So the Department of Justice is looking at what it is, what is it that we need to, to call, to question, to make a jury fact and you’re saying they’re experts that they can do this. Right?

Farron Cousins:                  Right. And, and Greenberg has already turned over, it’s thousands of documents, photographs and videos. And it includes the actual receipts. You know, the, the things Matt Gaetz and other men paid for through Greenberg. And so, because he’s continuing to cooperate, sentencing has been pushed to March of next year now, because he’s giving them gold.

Mike Papantonio:             Okay. So in human trafficking, this issue that you’re talking about, it’s, it’s subtle manipulation. It works. It, it, it causes some of these young, young women to, you know, to, to be trafficked. That they, they are experts at manipulation. And you’re saying at this point, the Department of Justice is going down that road. Their goal, obviously, is to say, judge, in trial we’ve given you enough information. It at least as a jury question, right? On intent.

Farron Cousins:                  Right. Absolutely. And, and this is, I forget the technical term, but it’s almost like a hero, a, a savior type relationship that the individual has with the women who are trafficked. They come in, the woman’s down on her luck and he says, don’t worry. I’m here to help you. I’m not taking advantage. I’m paying for your college. I’m paying for movie. I’m going to take you on a wonderful vacation. And the woman then feels compelled, you know, manipulated, to do what has been accused.