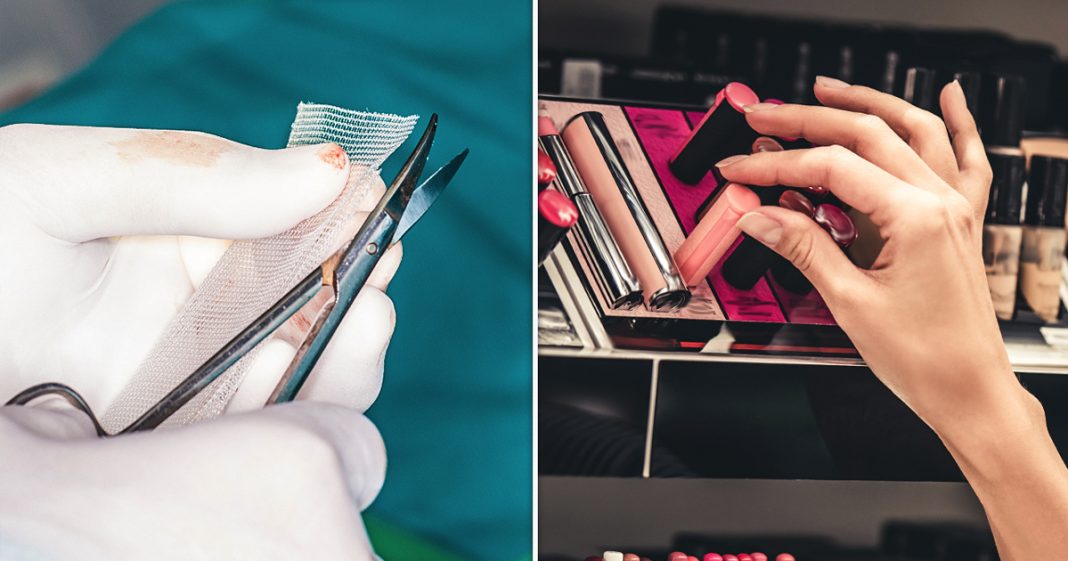 Via America’s Lawyer: Attorney Robert Price joins Mike Papantonio to explain how doctors are being swindled by producers of surgical supplies, specifically defective hernia mesh, unnecessarily endangering the lives of patients. Plus, disturbing new findings point to over a hundred everyday makeup products that have been contaminated with PFAS toxins. Attorney Sara Papantonio joins Mike Papantonio to break down how both regulators and manufacturers are to blame for these dangerous “forever chemicals” making their way into a laundry list of items being sold on store shelves.

Mike Papantonio:             We’ve discussed on this show, how PFAS toxins have made their way into our drinking water. And now we’re seeing reports that these forever toxins are contaminating makeup products that are still being sold on store shelves. I have Sara Papantonio with me to talk about this product, this product and this story. You’ve worked on this PFAS project for awhile. You understand this case very well. I, when I saw this, that women are putting this on their face every day, that’s absorbed through the skin and regulatory is just like kicking the can down the road. What’s your take on this story?

Sara Papantonio:              Right and in order to understand this story, you got to understand just how potent of a toxin this is. PFAS is what we call the forever chemical. That’s what we’ve labeled it in, in pop culture as. And what that means is that it’s bio-persistent, it stays in the blood. It’s bio-accumulative, it accumulates the more you get and it’s bio-active. So it reacts with the organs. And so that’s what these people are putting onto their eyes, their face, their makeup, and the skin is the largest organ in the body. It’s absorbing it. And finally, we’ve got the courage and the commitment to do something about it. But the fact of the matter is, what this boils down to, is we have known PFAS is dangerous for decades and the FDA and regulators and government are just finally standing up and saying, okay, we’ll, we’ll take it out of your cosmetics.

Mike Papantonio:             Sara, I look at a case like this, the hesitation always seems to be, they have political influence. Okay. There’s people at the top that are on boards. They’re on government regulatory agencies. They stop it cold. You’re familiar with the case tried up in the Ohio river valley. They made a movie out of it, The Devil We Know. That was only the edge of the story. And still we have regulatory dragging their feet on this product. How are these products used? Give me some examples of these cosmetics.

Sara Papantonio:              The, the, the fact of the matter is these are in every, PFAS is an everyday products. It’s used to create water resistance. So it’s in makeup, it’s in waterproof eye liner, eye shadow and all, all the, it’s everywhere. And so, like you said, the regulatory industry, what they’re doing now is they’re, they’re lifting their hands and saying, hey, look, we’re going to create legislation that takes this out of cosmetic products. But instead of being proactive, we’re constantly being reactive. The fact of the matter is if we would have known about this, if we would have taken it out of our products decades ago, you would have protected an entire generation from this.

Sara Papantonio:              It, it absolutely wasn’t a mistake. Like you said, we, 3M the company that manufacturers 90% of this chemical has known for decades. Since the, at least the eighties, that this is a bio-persistent drug that is not going to leave the body anytime soon. And that it’s going to react with the body.

Mike Papantonio:             Okay. You’ve been asked, our firm’s been asked to handle this case in Europe, because we thought the PFAS was only a US problem. But the truth is it’s in everybody’s blood all over the planet right now. The government under, the government under Trump was trying to say, oh, well, you know, there’s nothing we can do about it. So sorry. And at the same time failing to say, oh, by the way, this causes cancer, birth defects, liver disease, hormone disruption, and it’s in the environment for a million years. Give me your call on what this administration will do.

Sara Papantonio:              Well, I hope they do the right thing and they find ways to take it out. I mean, like you said, it’s not going away anytime soon. But if we stop it in its tracks right now, we can protect generations to come. We can at least find solutions to get this out of the environment, to some degree.

Mike Papantonio:             So as we look at it, it’s something that regulatory oversight, what we’re finding as we look at these documents, regulators were actually told, all these, all these monkeys died. All of these beagles died when we did the experiment. We found out that the company, they held that back from the, from the regulators. But then at some point the regulators got it and still didn’t do anything. So right now it’s in our drinking water. Matter of fact, right here in this town of Pensacola, it’s in our drinking water. It’s in the drinking water of most cities, urban cities throughout the United States. There’s a way to solve that, isn’t there?

Sara Papantonio:              Yeah. I mean, there’s filters. There’s, there’s an ability to take it out, but it just lands on the regulators and it lands on companies like 3M to do their job and fix this problem that they’ve caused.

Mike Papantonio:             Yeah. And they’ve got the money to do it. They just need to get busy. Sara, thank you for joining me. Okay. That’s all for tonight. Find us on Twitter and Facebook @facebook.com/rtamericaslawyer. You can watch all RT programs on Direct TV channel 321. Also stream them live on YouTube and be sure to check out RT’s new portable app, where you can watch all your favorite shows. I’m Mike Papantonio and this is America’s Lawyer where every week we tell you the stories that corporate media is ordered not to tell because their advertisers won’t let them and because their political involvement doesn’t allow for it. Have a great night.