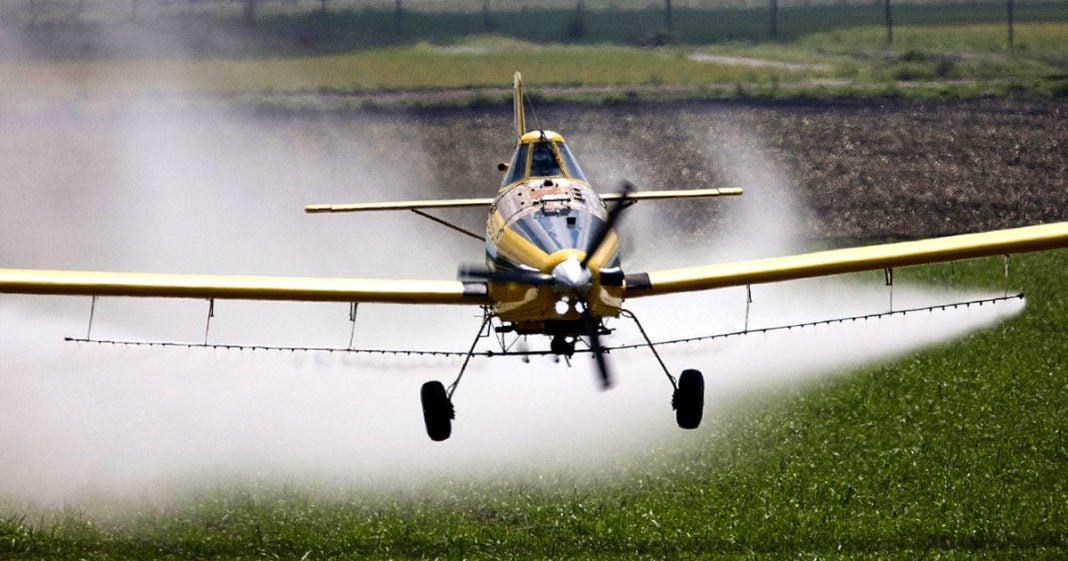 Via America’s Lawyer: Monsanto’s Roundup is far from the most dangerous weedkiller on the market, yet federal regulators continue to drop the ball when it comes to protecting consumers from hazardous chemicals. At the Mass Torts Made Perfect conference in Las Vegas, guest host Brent Jabbour discusses with Mike Papantonio how Paraquat was just re-approved for commercial use by the Biden administration, despite the deadly herbicide’s links to Parkinson’s disease.

Mike Papantonio:             Well, it’s a simple science test. Here it is. In about the 1940s and 50s, the chemical industry went crazy. They were making chemicals that were going to make our life better. So they come up with this molecule. It’s the Paraquat, let’s call it the Paraquat molecule. At the time they have no idea what they’re going to do with it. You know, we’re going to use it for A, we’re going to use it for B or C. What are we going to do with it? So they said, well, okay, about 1960, they said, let’s use it as an herbicide. The only problem with that is that the herbicide, three drops of it, would kill you. And they knew that when they put it on the market and they fully understood that people were going to be handling it, they’re going to be inhaling. It was going to get it in their eyes. They were going to, every, every possible way this chemical could affect them was going to be played out. So they hid that. They didn’t tell anybody, oh, by the way, this stuff will kill you. They sold it all over the world. It got to the point to where every country in the, on the globe said, no, you can’t sell this in our country except the United States. So that’s where we are right now.

Brent Jabbour:                    Well, and it’s very interesting because when you look at that, you see the country that designed it. They’ve, they’ve banned it. And the EU as a whole, it’s banned. In the United States, you actually need a full license from the EPA to actually be able to handle this.

Mike Papantonio:             Okay. Here’s what happens. Once you have the, once you have contact with the chemical, it’s not over, it’s a progressive latent process. It causes damage to the synapse of the neurological system. The, you inhale, you inhale the chemical. It builds up in your system. It starts killing the synapses in your brain that are giving you impulses to movement, to thought, and they knew that as early as the 1980s, but they kept it a secret. They, they, they kept it a secret from the FDA. And of course our dysfunctional FDA that they, I don’t even know why we have an FDA in the United States, took no action. Now here’s what’s important. They took no action after 32 countries across the globe said, you may not sell this poison in our country. As a matter of fact, the very countries that produce it, the UK, China, Switzerland, you can’t even sell it in those countries because those countries know how dangerous this product is. But our FDA said, yeah, we’re going to, we’re going to go along with it. It gets worse than that for the United States.

Brent Jabbour:                    Well, the next thing I was going to say is it seems like a theme we’re seeing at Mass Torts Made Perfect is of course, you know, companies putting, especially drug companies, these types of companies, they’re putting profits over people. But you know what else Mike, is that the regulators who are supposed to be protecting those people, they’re not doing their job.

Mike Papantonio:             If you believe that the FDA or the EPA or the SEC, or any of the regulators are looking out for your best interest, you are in LA LA land. Right now, all that is, it’s a, it’s a, it’s a door. It’s a revolving door. The, the regulator for the FDA, this is actually, this happened with Paraquat. The regulators with the FDA who should have been making decisions not to allow the sale of this product in the United States are now working for the company. Okay. Here’s how they do it. They meet some regulator who’s making a hundred thousand dollars a year. They say, hey, Joe, I’d really appreciate you giving us a break here as you look at this chemical. And oh, by the way, when you leave here, we’re going to give you a job that could involve six, five, $600,000 a year. Why don’t you work with us? That’s how, that’s how it works.

Brent Jabbour:                    And it seems like when we see so many of these stories as well, we tend to see it’s a new drug, it’s been done or a new product that has been put on the market and obviously we didn’t know, but the FDA says, oh, we’ll do testing later, but we’ll approve it for market. But as you mentioned, this has been decades.

Mike Papantonio:             Oh, it’s been, it’s been since the 1950s. Look, our president who I voted for and most people watching this program probably voted for because he was a Democrat and Democrats take care of us. That’s what we think. Republicans, bad guy, Democrats, good guy. I call it tribal thinking. It’s, it’s, it’s killing us. This Democratic president Biden just had the EPA sign off on the idea that you can take an airplane through the sky and you can dump Paraquat all over crops. You can put it in the air. It can be inhaled. It can be distributed all kinds of ways. That’s what our Democratic president Joe Biden said was okay. Is he different than the Republicans? No. We had the same thing happen with the Republicans where they extended the use of Paraquat in the United States while other countries were saying, you may not sell this toxic trash in our country.

Mike Papantonio:             You don’t even have to ingest it. You can take your gloves off to use the stuff and it gets on your hands and once it’s on your hands, the process begins. It causes cellular damage in a slow progressive way. You don’t know it day to day, but that’s what it’s doing. It’s moving through your body systemically causing slow cell damage.

Brent Jabbour:                    And, and, and the point I was going to get to there is essentially that, you know, yes, those people who work with it are endangered, but also anybody who is around it. If you live in an area in which they may be, as you said, spraying crops with Paraquat, then you’re also in danger.

Mike Papantonio:             Now with this new law that the Biden administration has signed off on, if you are spraying it from the air and your home is within 1,600 feet of where that Paraquat lands, you are in danger of getting Parkinson’s disease. It’s that simple.

Brent Jabbour:                    And, you know, what has been the pushback against this? I mean, how did we get to the point from it’s banned in almost every country worldwide, the US is allowing it under, under specific circumstances. And now the Biden administration makes this move.

Mike Papantonio:             Okay. The Biden administration misses the idea that sometimes that money that big corporations put into, into, into their political arena, that that money is not as important as human health. And they forget that and they say, we’re going to allow it to happen. And right now we are in the bigger threat from Paraquat than the country has ever been because of their right to spray this on top of our houses.

Mike Papantonio:             The answer is, the answer is yes. There are, there are ways to deal with the herbicide problem beyond things like Roundup, which killed God knows how many people and the government allowed that to happen. The EPA allowed that to happen. Besides Paraquat that the government is again, allowing it to happen. Look, there’s people that farm, that farm natural, they farm with natural access. There’s all types of ways to deal with, with, with problems that herbicides are supposed to solve. What we happen, what happened in the United States is we became lazy. The chemical industry said, we have a brand new thing that’s going to save your life. We’re going to pro, we’re going to be able to produce more, more food because of it. In the Roundup story, you actually had the government that at that point was led by Bill Clinton said, we must have Roundup because we must have genetically modified seeds, right? So they, the government was out selling the idea that we have to have genetically modified seeds. Why? Because Monsanto was putting money in their pocket, in their political pocket. And with Citizens United, as it exists today, I don’t know how we stop it.

Brent Jabbour:                    Well, and that’s what I was going to ask. I think that the, the next question you have is like, of course you have litigation and the end goal is these companies that have made billions of dollars over their history, they’re going to throw money at people. They’re going to complain that it hurts them. But does anybody ever really get held accountable?

Mike Papantonio:             It’s, it’s a cost of doing business. Okay. We just came out of, we’re, you know, we just, you, you heard about the $26 billion settlement that our firm was involved in negotiating. Now, does that cost these people really money that’s going to put them out of business? A lot of corporations, wherever we’re dealing with this corporation, the, the, the, the folks that made this product, that corporation made a decision that it’s better to pay fines. If it’s $150 million, who cares, it’s a cost of doing business because we sell $10 billion worth of product. Until somebody goes to prison, nothing really changes about that.

Mike Papantonio:             Because they dress up like you, Brent, they have suits on. The guys that make this decisions, they have MBAs from Harvard and Yale, and they have, they have nice Armani suits on, and they have a Rolex watch on and they don’t look like criminals, do they? But, but what about the kid on the street corner who’s selling five ounces of marijuana because he’s got a hoodie on and we throw him in prison for life and these, these thugs, these corporate thugs who allow this to happen, we let them walk. They pay a big fine and it’s business as usual. We have to stop that. We have to change that aspect of our culture.

Mike Papantonio:             The only way you do it is to get some politicians and some attorney generals with some guts. We haven’t had an attorney general with guts in, in at least five administrations. Eric Holder had the entire, he had the opioid industry, right, he had them right there. He could have prosecuted right there. He had everything he needed to go after the opioid industry, nobody was prosecuted.