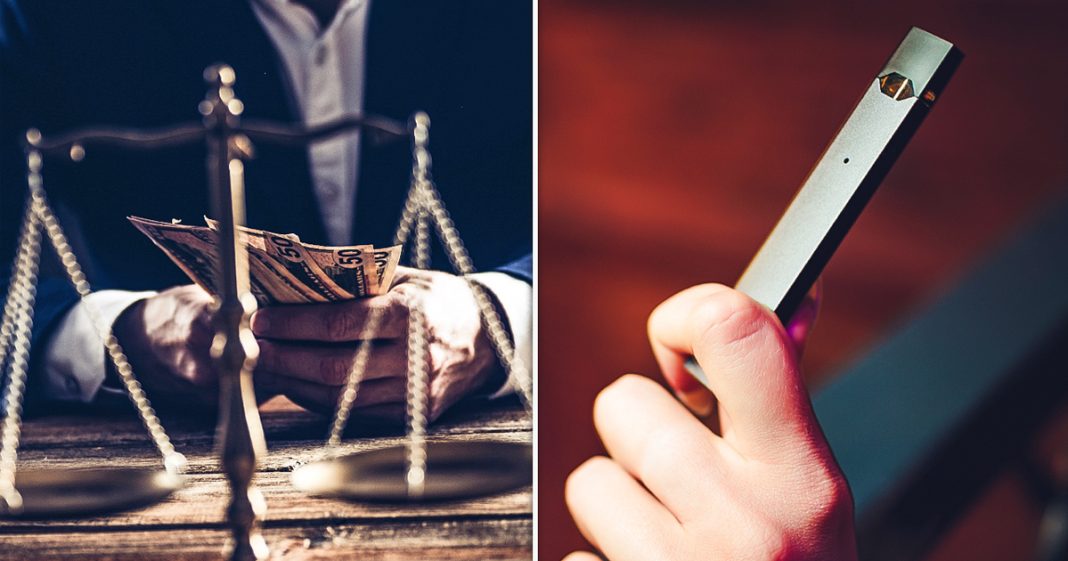 Via America’s Lawyer: A bombshell report reveals 131 federal judges failed to recuse themselves from hundreds of cases involving companies they or their families owned stock in. RT correspondent Brigida Santos joins Mike Papantonio to explain more. Plus, Juul has been in the hot seat since 2019, after the company was found to be aggressively marketing its products to children. Meanwhile, the FDA has yet to crack down on their e-cigarettes despite users reporting seizures, lung disease, and strokes. Attorney Madeline Pendley joins Mike Papantonio to how regulators continue to turn a blind eye when it comes to Juul.

Mike Papantonio:             Dozens of federal judges have broken the law by failing to recuse themselves from lawsuits in which they had a financial clear conflict of interest. Brigida Santos joins me now to talk about the story. Brigida, you know, when the public sees this, it is outrageous. They get so angry. How many judges are implicated in the scheme? And tell me what’s going on. Give me the big picture and then how many judges are implicated.

Brigida Santos:                   So far, at least 131 federal judges have broken the law and violated judicial ethics by hearing 685 legal cases involving companies in which they or their family members owned stock. Now over five dozen judges have been ordered to notify parties in 329 lawsuits that they should have recused themselves. The outcome of those cases could now be overturned. At least six dozen judges or their families also held shares in companies that were plaintiffs or defendants in the judges courts. And they actively traded the stocks as legal proceedings were underway. And if that is not corrupt enough, roughly two thirds of the judges rulings on motions that were contested came down in favor of their own financial interests or the financial interests of their family members.

Mike Papantonio:             Well, you know, let me tell you how broad this is. When you’ve got a case, let’s take a mass tort case. Mass torts case is where there are thousands of people that have been injured with a product. Okay. The product may be Bayer, it might be Merck, it might be Pfizer. All of a sudden this judge clearly, clearly knows they own interest in that company. Like if you are, if you’re a judge right now and you own interest in Johnson and Johnson, you’re worried that the stock is going to drop because of all these lawsuits. So don’t you recuse yourself. It’s just common sense. It’s not like these judges, judges didn’t understand what their obligation was. Which companies did the federal judges own shares of in? I could name half a dozen to a dozen. But why don’t you tell me what the story’s actually showing.

Brigida Santos:                   So some of the companies that federal judges owned shares in that were involved in the judges lawsuits include ExxonMobil, Comcast, and Ford motor just to name a few. Now conflict of interest laws are meant to ensure that no one is a judge of their own cause and to reassure the public that the courts can be trusted. The disclosure cited in this report only span an eight year period between 2010 and 2018. So Mike, there are likely more examples that we simply don’t know about because no one’s looked into it.

Mike Papantonio:             Yeah. And hopefully good lawyers are going to take these cases that might involve thousands, one decision by a judge on something like a class action can involve tens of thousands of people. Hopefully we’ll find lawyers that will go and overturn those decisions and then report that judge to the folks that ought to be re, ought to be reprimanding the judge. Ought to be reviewing what that judge did. Ought to be saying, how many times did you do this judge? I mean, this is a very troubling story. How, how have the judges responded now, now that they’ve been, they’ve been caught, how are they responding to this?

Brigida Santos:                   Well, they claim they mistakenly broke the law and they gave reporters quotes like quote, I dropped the ball, thanks for helping me stay on my toes, when they were interviewed or they say they accidentally omitted some of their holdings from financial disclosure forms. And sadly corruption doesn’t just take place at the federal level. In fact, last year reporters conducted the first comprehensive accounting of judicial misconduct nationally, finding that thousands of American judges remained on the bench despite breaking laws or oaths, including state and local judges. Judges have incredible power and oversee hundreds of thousands of civil and criminal cases every year and federal judges have the most power. They hold lifetime appointments and they can only be removed by impeachment.

Mike Papantonio:             One judge can affect tens of thousands of people in something like a class action or a mass tort case where you’ve got a product that’s defective and it’s killed people, that judges decision can affect tens of thousands of people. And so that’s why this is so troublesome. I’m wondering, Brigida, would, I’d like to do another story on this. Let’s, let’s tease this story out a little. Would you come back on and let’s do, let’s do a part two on this story. Okay. It’s, it’s that troubling.