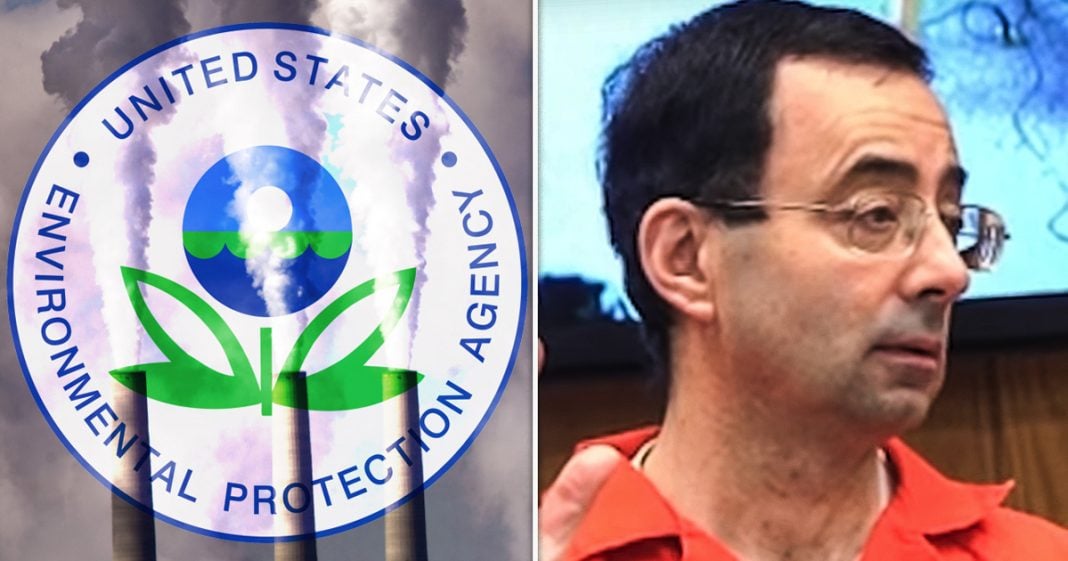 Via America’s Lawyer: EPA whistleblowers expose how the agency turns a blind eye to hard science in order to appease big business. Mike Papantonio and Farron Cousins discuss more. Also, Former Olympians including Simone Biles and Aly Raisman made their voices heard on Capitol Hill – after testifying that the FBI did almost nothing to stop Larry Nassar from molesting teen gymnasts. Mike Papantonio is joined by legal journalist Mollye Barrows to discuss how the FBI botched their investigation into the serial sex offender.

Mike Papantonio:             Whistleblowers at the EPA have told the Intercept that the agency is completely ignoring science in order to appease big business. Well, let, let me, let me start off with this story. First of all, this is the Intercept and if people aren’t following the Intercept, they’re not getting the news. This is the best news agency in America. It’s not daily news, but it’s, it’s in-depth coverage of really important issues. So pickup the story from here.

Farron Cousins:                  Yeah, and this one comes from Sharon Lerner, who is just phenomenal with all these corporate issues.

Farron Cousins:                  But she actually has an ongoing, I guess you’d call it anthology at this point, she has been contacted by whistleblowers at the environmental protection agency. She has gotten her hands on emails, all of these internal documents. And one of the biggest revelations right now is that these EPA scientists at the what’s called the new chemicals division. Now a little clarity there. This is when you have a new chemical out there, you know, is it going to hurt people? What do we do? We have to evaluate it. This is not for things already out there on the market. So scientists have reached out to Lerner and said, listen, we’re telling our supervisors that these chemicals are not safe and they’re coming back to us and saying, well, say that they’re safe anyway. Change the way you do your research so that we can get these things approved and out there in the environment.

Mike Papantonio:             One decimal, one decimal, in a series of ones and zeros changes the analysis, analysis totally. It takes a product like Roundup, which we saw the EPA do, they made Roundup safe by phoning up numbers. The EPA did that. C8, they made C8 PFAS safe by phoning up the decimal marks to come up with a risk benefit analysis. They did that with C8. Paraquat, now these are all things that will kill you. They will kill you and your family. But industry came in and they put so much pressure on these folks that wanted a job. Now, Sharon Lerner did a great job of understanding because most of the time, most on media does not understand this.

Mike Papantonio:             But what happens here is she, she, she just called it out. She said, this is post agency job prospects for these folks, right?

Farron Cousins:                  The scientists are the ones who are saying, we’re doing our job. It’s the bureaucrats. The people who don’t even understand the science, but they know how the system works and they know that if they can give, you know, a good little handout, whether it’s to, you know, Monsanto or DuPont or Dow or whoever it is, if we can appease them with this new chemical. If we can just say that, oh, the risks of it are negligible. That’s the word they keep using, negligible. Then maybe they’re going to hire me once I’m no longer here. I can go from making a public servant salary to a couple hundred grand a year.

Mike Papantonio:             You, you go to the market and say, you’re the guy that allowed Paraquat now through the Biden White House to be sprayed in the air all over the place. Even though it causes all kinds of cancers, it causes Parkinson’s disease, they’re all fatal. Three drops of this stuff will kill you. And somehow these, these management bureaucrats took the marching orders from corporate America, got the okay from the White House. And now Biden administration has the EPA permitting spraying Paraquat all over the place from the air. It’s just insane. What you have risk values created by the EPA now they’re just meaningless babble by, by industry pimps. That’s what it is. That’s what the EPA has come to. It’s not the scientists. The scientists are saying, look, I don’t want to do this. I don’t want to move that decimal to change the risk benefit analysis. But I’ll do it if I’m ordered to. And some of the folks are just quitting. They’re saying I ain’t going to do it anymore, you know.

Mike Papantonio:             Yeah. They’re calling us, by the way, interesting development you might want to know about.