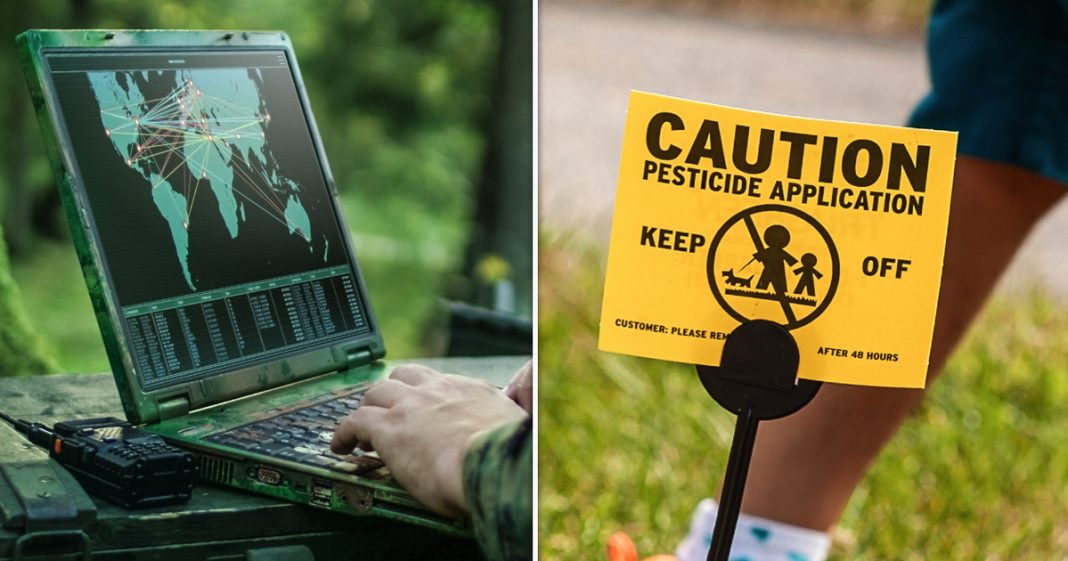 Via America’s Lawyer: The Pentagon apologizes for its recent drone strike which killed 7 innocent children in Afghanistan. Mike Papantonio and Farron Cousins discuss more. Also, the EPA announces it will ban the use of the pesticide chlorpyrifos which is linked to developmental disorders in children. Mike Papantonio is joined by Attorney Sara Papantonio to walk us through the chemical’s history, and discusses why did it took regulators 50 years to finally ban it from use.

Click here to find out more about Paraquat pesticide lawsuits.

Mike Papantonio:             The EPA has announced it’s going to ban the use of a popular pesticides that’s been linked to developmental disorders in children. But why did it take the agency 50 years to finally regulate this chemical? Sara, I’ll throw, I’ve got Sara Papantonio with me, Sara, I’ll throw it out to you. 50 years.

Sara Papantonio:              50 years, since the 1960s, when Dow created this chemical pesticide we call chlorpyrifos. They put it on the market and then at about 2007 is when we really started to determine, hey, this isn’t safe. This is going to cause birth defects. This is going to cause problems with children’s IQ. It’s, it’s, it’s a really nasty pesticide. But of course now 13 years later, we’re just finally taking it off the market because not the EPA, but a court actually finally had the guts to say to the EPA, this is dangerous. Take it off the market.

Sara Papantonio:              It’s incredibly dangerous. It’s highly potent and the EPA knew that. Like, this is a tale as old as time with the EPA. They’re so dysfunctional and of course, of course, we’re making this a political issue. Of course, we have the Biden administration standing up and saying, hello, this is our huge victory. We’re taking this dangerous pesticide off the market. But the real story is in the fact that this is a court ordered ban. Basically we’ve got a court in California saying either take this off the market, it’s dangerous or do something to fix it, right? And the EPA has determined, it’s not safe. You know, well, we have to take it off the market. We can’t fix it. And so what this really boils down to is the fact that the EPA who was supposed to be the, the smartest brains, the people who truly need to protect the environment and the consumers, they’re not doing their job. So we’ve got attorneys and we’ve got judges stepping in to learn the science, become the experts in the science and telling the people who are supposed to be the experts, the EPA, that it has to come off the market.

Mike Papantonio:             Okay. This was a chemical that was developed by the Nazis in world war two for chemical warfare. We knew that when it was put on the market, we knew that, we knew exactly the chemistry of how it would be causing brain damage in development, in developing children. We knew that we were using it on apples. We were using it on soybeans, we were using it on citrus. We knew it was all, it was the most pervasive plant, I mean, if you’re living in Fresno, California right now, you got glyphosate. You’ve got Paraquat. You’ve got, now you have this. I mean, how does anybody have a chance from the standpoint of just protecting themselves from a chemical like this?

Sara Papantonio:              Well, we certainly can’t trust the EPA to do it too and that, and that is the heart of this story. It’s the fact that we’ve got the EPA scientists that are really just political motivated scientists, right? And we’ve got corporations like Dow the people who are making these chemicals that have such a strong hold on our politics that are just throwing millions and millions, if not billions of dollars into political campaigns. So people like the Trump administration, the Biden administration are too darn scared to take it off the market in fear of losing that funding.

Mike Papantonio:             So, okay. So here we go. We’ve got, uh, we have now the EPA declaring victory on this chemical. At the same time, they made that decision, they made a decision on Paraquat, which is even more dangerous than this chemical and the EPA under this administration says, we’re going to expand the use of Paraquat, where you can use it, we, you can dust it through the air. Tell me about that.

Sara Papantonio:              This is such an important story because it highlights the Biden administration talking about out of both sides of their mouth. You know, on one side, we have them claiming victory for taking this dangerous pesticide, chlorpyrifos, off the market. But then on the other side of the mouth, their mouth, what are they doing? They’re actually expanding the use, like you said, for Paraquat, something that is even more deadly, even more dangerous.

Sara Papantonio:              Well, now we know that it’s the court systems that are actually going to clear up our environment and not the EPA. So if you live in the area, you know, you’ve got to take it to court.