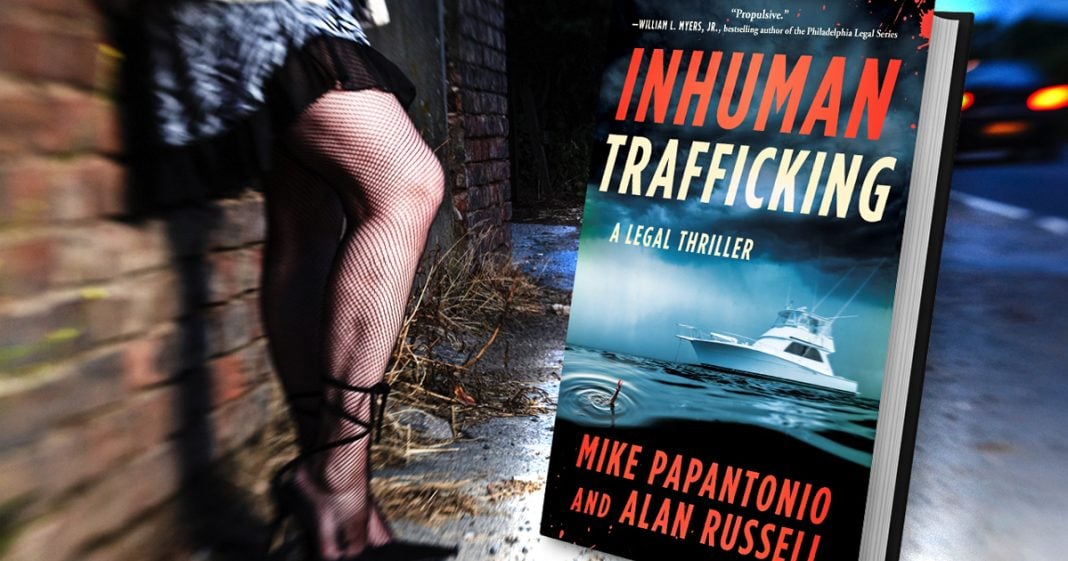 Via WPHM: You’ve heard of human trafficking, our next guest, who’s really taken a very close look at it, in fact, a deep dive, if you will. His book is called, “InHuman Trafficking.” It’s a legal thriller, it’s fiction, but it’s based on an awful lot of truth. Mike Papantonio is a lawyer who tests cases and is one of top legal minds out there.

Mike Papantonio:             What, what I. Yeah, for example, when the opioid case, we initiated the opioid case in the United States and we, we try what they call the bellwether test cases to see what, what are the outside possibilities of what’s a jury going to do with this if it goes to trial. So we try the very first cases that typically are tried in these, in, in that type of litigation, whether it’s a pharmaceutical case or a matter of fact, the, the tobacco case that was, was launched right here in Pensacola, oddly enough, some of the biggest cases in the country. And so what we’re tried, what we’re hired to do is to, to first of all, to do the discovery in the case, find out who did what and who did what wrong and who were the sociopath’s and who were the good guys. And then we go to trial with those facts. So that’s basically the best description I can give you, but we’re all, it’s just a, an entire law firm of, of trial lawyers that try these test cases.

Mike Papantonio:             Yeah. We tried the first national case up in Ohio. As a matter of fact, if you look at the news today, there was a, I think it was 161 folks arrested for the trafficking cases that are going on up that way. But we, we tried, we, we filed that case to bring some national attention to how bad this is. I think everybody believes, Paul, that this is just one-off cases that you have some pimp who hires women and, you know, some untoward business takes place. It’s far from that. What you have is now you have corporate America involved in it, they’re financing some of the biggest, some of the biggest trafficking problems in the country. They’re, they’re, they’re, those are the folks that to a large degree are, are financing the porn industry that leads directly into the kind of trafficking that is just a, it’s a pandemic plague on, on this country right now. And so I think most people aren’t aware of that, Paul. I think what people think is that this is just this, some seedy little side deal that some character, you know, he has one or two girls that work for him.

I mean, we’re, we’re involved with a case that you have the trucking industry that’s trucking girls from the East coast originating in places like LA, trucking them across interstate 10 throughout the United States, stopping at truck stops all along the way with girls that are 14 and 15 years old and telling folks, come by and have sex and leave. Now that’s organized, you see. That’s not, that’s not what everybody thinks. They see, they see a show like, you know, Taken and they say, well, okay, this is, this is how all this is. But the surprise is that you’ve got corporate America involved in a big part, the big hotels, they understand what’s going on when they bring these, you know, young girls into hotel for two weeks and they bring in camera equipment and lights, and they have the, you know, they have the suite that’s been rented for two weeks. They know what’s going on and these hotel chains are involved. As I say, you’ve got, you’ve got financing coming from some of the, you know, directly from Wall Street to make some of this happen. So.

Mike Papantonio:             Well, it’s disjointed. First of all, if when I, it, corporate media is dead, Paul, where it comes to really telling stories. They, they don’t, matter of fact, I’ve done corporate media, MSNBC, Fox news for years and years, I did it. And I found out that they can’t, they can’t move into telling stories that are, that, A, the advertisers in this situation, if they tell the whole story, it goes all the way to some of their advertisers, some of the hotel chains, some of the people who are financing this stuff. So, so corporate America, corporate media has become incapable of really reporting the news on stories like this. The same way that they did on opioids. The reason the opioid disaster took place is because they wouldn’t talk about the distributors who were distributing this stuff illegally. So we got, we got a kind of a, a multiple problem.

You’ve got red, you’ve got regulators who are completely dysfunctional. I mean, where it comes to the department of justice actually doing their job. They’ve been terrible at, at doing what they need to do. State regulators, forget it. And so, so you have regulators out of there, they’re not doing their job. You’ve got the media that is just almost abysmal failure where it comes reporting stories like this. And so this book, you know, my hope is that this book, somebody will read it and they’ll better understand what it is that’s going on. I’ve written several books similar to this, as you may or may not know, and it’s covered the cases that we’ve handled. But, you know, my thought about this book is to have them sit down at a, you know, at a beach or, you know, the privacy of their home and read a good thriller and come away and say, I learned something. And because if a story’s reported, maybe it has a shelf life of 24 hours, but it takes more to, to tell the whole story here. You’ve got to tell the whole story in a way that people understand it.

Mike Papantonio:             Well, I think you can, but I think you got to take the money out of it. I mean, it’s a $42 billion a year business. And what had, what happens Paul is you’ve got, you know, you’ve got people running it that, you know, that’s running that, running that industry that, you know, they have a, they have a commodity they can use again and again, this isn’t like selling cocaine where you sell it and it’s gone. You’ve got these girls that you, you know, they’re, if you’re taking it from truck stop to truck stop, whatever you’re doing with it, putting them in a hotel room and, you know, filming pornography, whatever you’re doing, it’s reusable, it’s a reusable commodity. Most of these kids that come into it last about seven years is the average. They end up dying from a whole host of problems after that. They, you know, typically die of drug overdose or suicide, or, you know, diseases of all kinds. So it’s a really ugly story and even as I’m telling it, it’s probably you’re going, oh my God, I don’t want to hear that. But the truth is we have to tell the story. You, somebody’s got to know how bad this is and, and United States is, you know, the LA and New York, East and West coast, they’ve just become, you know, just like the, the, the, the home base for what’s going on here. And then it spreads throughout middle America.

Paul Miller:                           It’s a page turner. It’s a legal thriller, “Inhuman Trafficking,” the book by our guest, Mike Papantonio along with Alan Russell. Yeah, really awful stuff. But, when you get into it and you start to learn more about it, it becomes pretty engaging, pretty engrossing, doesn’t it?

Mike Papantonio:             Yeah, I think it does. I think you have to, you know, I have to do it because we file the cases and then everyday it’s easy to write these stories because you come away from the courtroom and you’ve, you know, something else has happened and you’ve learned some new fact that nobody’s paying attention to. And that’s the kind of thing that’s put into these stories, their backstories. The elements of that book, even though, you know, the murders did not occur and some of that material didn’t happen, the basic story did occur and is occurring even as we speak, Paul.