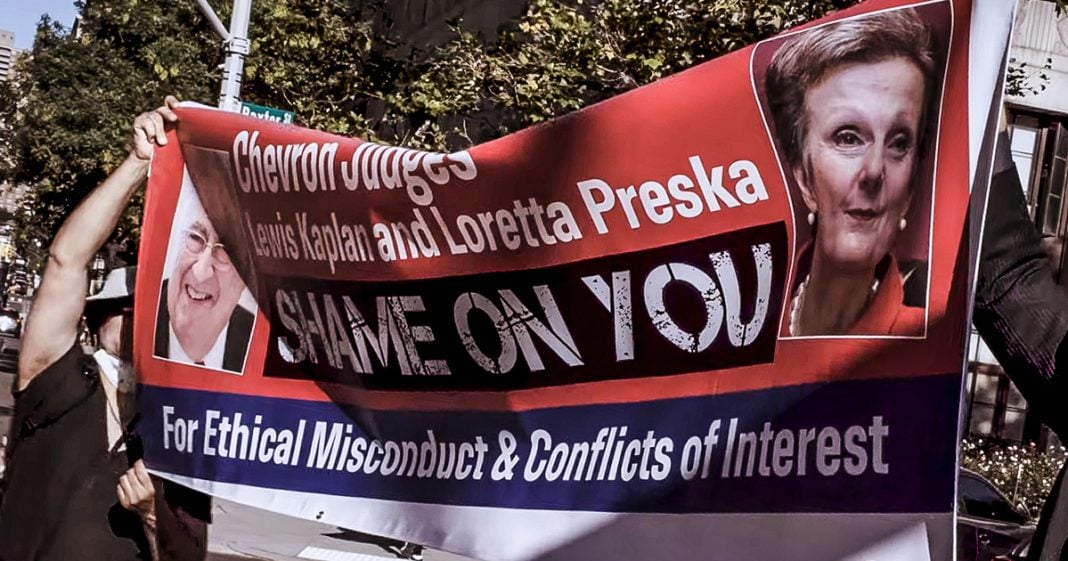 Via America’s Lawyer: Chevron was ordered to pay $9 billion back in 2011 after countless gallons of contaminants flooded the Ecuadorian rainforest. But the oil company has spent the last decade corporatizing the U.S. court system in order to prosecute Steven Donziger, the attorney who spent years representing tens of thousands of Ecuadorians whose community was devastated by toxic wastewater. Mike Papantonio and Farron Cousins discuss more.

Mike Papantonio:             Powerful corporations and politicians have been using the legal system to target plaintiff’s lawyers for years and Steven Donziger, well, he’s become the latest in a long line of lawyers who were prosecuted for taking on corporations.

Steven Donziger:                              The prosecutor came from a Chevron law firm, private prosecutor, subject to no supervision by the department of justice. The judge, Preska, leader of the Chevron funded federalist society and judge Kaplan who charged me never recused himself. He has investments in Chevron. I was completely surrounded by Chevron in this trial. On top of that, there are two main witnesses where Chevron lawyers from a second Chevron law firm, Gibson Dunn & Crutcher, who had worked and enriched themselves for 10 years going after me on the civil side. They were the witnesses against me, and they were hiding behind their privileges with Chevron to not give us their bills. They obviously had a financial incentive to go after me. We never even knew how much Chevron had paid them, how much time they had spent assisting this private Chevron prosecutor preparing her legal filings. Um, and, but it was very clear that Chevron had spent, invested millions of dollars in my criminal prosecution, while professing to the public they had nothing to do with the case. I mean, they just lied about it, openly.

Mike Papantonio:             Farron Cousins from the trial lawyer magazine joins me to talk about what happened. Let me, let me lay it out for you. This Donziger hits Chevron for creating what has been described as an Amazon Chernobyl. They dumped 18 billion, 18 billion gallons of toxins into the waterways, into the backyards of three indigenous tribes there, causing cancer, leukemia, childbirth. This lawyer takes them on down in Ecuador, which is almost impossible to begin with, hits them for $9 billion. Tries to come back United States and enforce the verdict. What did the judges do to this guy?

Farron Cousins:                  Oh, the judges immediately say, oh, well, we’re pretty sure you’ve bribed all these courts down there in Ecuador. Uh, so we’re going to prosecute you instead. We’re going to try to throw out this massive ruling that you got against Chevron here and, you know, to talk about the scope of what Chevron was doing down there in Ecuador, it’s been described as 30 times the size of the Exxon Valdez oil spill and this happened over the span of decades. Chevron was allowed to operate in Ecuador with little to no oversight at all. And Donziger spent years down there working with these tribes, documenting all of the cancers and all of the other maladies that these people were suffering from, worked his tail off to finally get them justice and the US justice system had said, instead says, nope, we don’t like you going after corporations. We’re gonna take you.

Mike Papantonio:             Okay, Tell, now, you know, right, what’s out here right now. One of the big stories is that judges, federal judges, state judges at every level are not recusing themselves from cases. I don’t have any information to say these two judges Kaplan and the other judge should’ve recused themselves. But it, it, to, to have this guy spend two years in house arrest and then have this other judge say, well, you’re going to be, you’re going to you go to jail for six months. Chevron did all this to this guy, didn’t they?

Farron Cousins:                  Yeah, absolutely. And, and the main judge in question here is judge Preska. Now judge Preska comes along and last week, she’s the one who gave us this ruling, Donzinger, Donziger you’re going to jail for six months. Well, if you look back through Preska’s past, you know, she was first appointed to the court by George H W Bush. So she has been serving as a judge for far too long. But prior to coming to the bench, she worked at the corporate law firm of Cahill and Cahill, who I’m sure you probably know, years later down the road, Cahill’s the one who actually defended and gave us Citizens United. So that firm that she used to work for gave us this unlimited corporate money. Now, as a judge, Preska has issued several rulings that were borderline disgusting is how I would describe them. She has helped to dismantle parts of Dodd-Frank title X of Dodd-Frank. She has helped to weaken the consumer financial protection bureau on behalf of corporations and just labor issues, she’s going corporate. Environmental issues, she’s going corporate. It’s everything you would expect but on steroids with this particular judge.

Mike Papantonio:             Farron, my memory is what they, she tried to make an attempt at being appointed as appellate judge. And when she made the attempt, even the Republicans on the committee said, ain’t no way this woman is going to be a appellate judge. Is that, is that right?

Farron Cousins:                  Right. That was actually one of the last things George W Bush did, was try to get this, you know, judge his dad appointed said, okay, we’re going to move you up. So I’m submitting it. He submits it to the Senate and the Senate, which I believe at the time was controlled by Republicans. Maybe I’m wrong. But either way they look at it and they say, we’re not bringing this to a vote. We know you’re about to leave office because this was right at the end of his term. We know we love to pack the courts at the end of a term, but we’re not gonna, we’re not, they looked at her and they said, no.

Farron Cousins:                  Yeah. And, and, and let’s not forget, even back then in 2008, it wasn’t as partisan with the appointment of judges. You know, you could get a judge passed even if it was a super liberal or super conservative, you know, 90 to 10. But everybody looked at this individual, Preska, and said, we’re not even gonna take it up. We’re gonna let this nomination just die and we’re not even going to discuss it on the floor.

Mike Papantonio:             What I’m seeing right now is, you know, you’ve got Greg Palast, Greg Palast was an investigative journalist for the Guardian who, by the way, did this story. Greg Palast now is turning this story to those judges more and more, his attention is going to Lewis Kaplan. It’s going to this judge, because I guess the, on its face, when you hear the facts, the facts are even the UN. I mean, the United Nations has, have come in and said, through amnesty international and the human rights council, you can’t do this. This man went to Ecuador and he, his case was that 30,000 farmers and indigenous people they had their land completely destroyed. Again, it was described as an Amazon Chernobyl. They said that, and here’s the interesting thing. When you look behind the story, Chevron was, they were the folks manipulating the politicians. Chevron was, was, that was the avenue of fraud. That was the avenue of bribe. And all of a sudden, he gets back here to the Southern district of New York. We’re at federal Southern district in New York is where this takes place. Nobody, no consumer should go to the Southern district of New York. You’re going to always lose your case. This is an example of that right off the bat. But the, when you have the, the UN saying, the conduct of this, of this judge is so bad because we have kids that are dying of leukemia four times as high as what the, the average should be. How about this? The epi studies on this whole thing, they did a series of epidemiology studies, 130% above the normal rate for cancer. And this guy took him on. He gets, he gets a result for $9 billion. He comes back to the United States. When he came back to the United States to try to enforce it, you know what Chevron did, they pulled all of their assets out of Ecuador, and they moved them to places like Canada or Brazil. So he couldn’t get to the assets. And then the judges side with Chevron. Oh, this guy has done something terrible. They don’t look behind apparently, I guess they didn’t look behind the conduct of Chevron. Is any sign they did?

Farron Cousins:                  No, not, not to my knowledge. And you and I have talked about this story, actually with Greg Palast, all the way back in the mid two thousands, you know, this is not a new story for us. This is something we have actually been covering on various outlets for over a decade now. And we know how Chevron behaved down there in Ecuador. It’s reminiscent of Chiquita bananas.

Farron Cousins:                  You know, basically you kind of pay off the right people here, you influence the government one way or another, you know, Ecuador.

Mike Papantonio:             And they left them with what’s been described as an apocalyptic catastrophe for humans and for the environment.