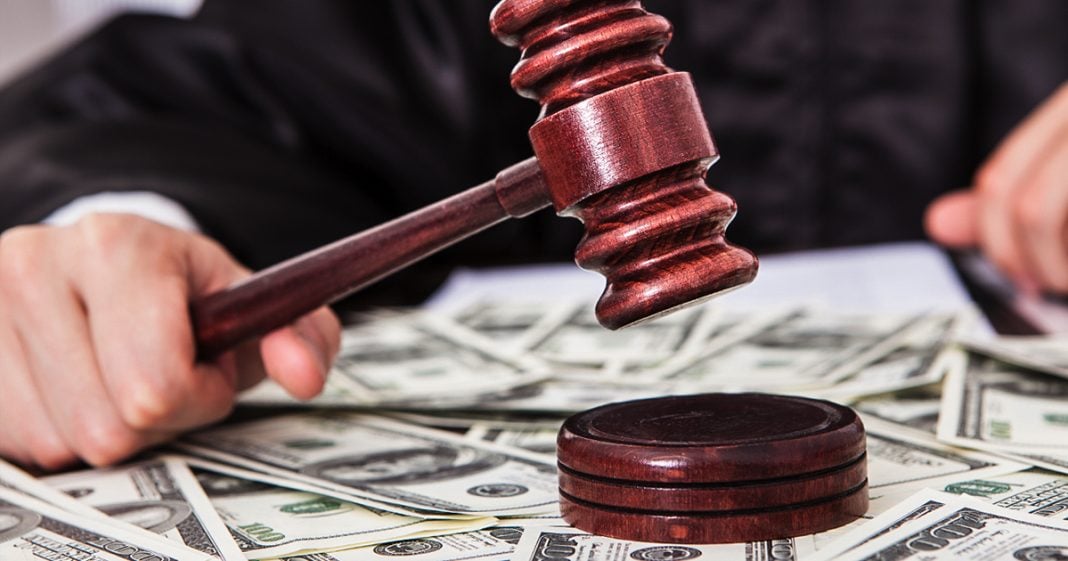 Via In Question: A bombshell report says that more than 130 federal judges violated US law and judicial ethics by overseeing court cases involving companies in which they or their family owned stock. A Wall Street Journal investigation found that judges have improperly failed to disqualify themselves from nearly 700 court cases around the nation since 2010. Attorney at Levin, Papantonio and Rafferty Michael Bixby shares his perspective.

Manila Chan:                       Right now to a bombshell report that says more than 130 federal judges have violated US law and judicial ethics by overseeing court cases involving companies in which they or their family owned stock. A Wall Street journal investigation found that judges have improperly failed to disqualify themselves from nearly 700 court cases around the country since the year 2010. And joining us with his legal expertise attorney at Levin Papantonio and Rafferty, Michael Bixby is here. Michael, good to see you again. You know, this, this to me seems like a clear case of conflict of interest. These unethical judges only issued a mea culpa to the concerned parties of those cases. Is there any recourse, Mike, for the litigants who were tried by these judges?

Michael Bixby:                    Yes, there is. And I’ll echo what’s included in the report from the Wall Street journal by a law professor. This situation is surprising and it’s disappointing. But the good news is there is recourse, so you can have, and in fact, it’s already happening where you can request an independent court, a different judge to review. The parties who have been affected by this have been notified for that very reason. They can seek relief, whatever that might be overturning, reconsidering the decision and that’s, that’s already happening in some cases. Now, of course, these are civil cases, so you’re not seeing any of these being criminal cases and some of the decisions are minor. Things like transfer. But we can’t overstate the importance of faith in the judiciary, an independent judiciary that avoids any appearance of impropriety. And in these cases, unfortunately, the, the judges should have recused themselves, but for whatever reason, whether it’s justified or not, they did not. And that’s an error that needs to be fixed.

Manila Chan:                       Exactly. On that note, you know, like you said, when stories like this break, it certainly has an impact. I think, on an already dis, distrusting public of our justice system, or people say our injustice system. It is so incredibly rare for a judge to be taken off the bench for any misdeeds. I mean, some way more egregious than just owning stock in a company whose case they were presiding over. Where are the checks and balances for judges, Michael? In, in other words, who watches the watchmen?

Michael Bixby:                    Sure. There are several checks and balances here. First of all, I mean, any person could file a complaint against a judge. There’s a process for that. It would not, of course be judged by that judge, but it’s reviewed by an independent chief judge for a particular district. There’s judicial committees that are sort of self-regulatory in that, in, in that sense. And then ultimately, and, and in fact, this has happened where there can be impeachment available for federal judges in particular. There’s an impeachment process in the past, at least 15 judges over the years have been impeached, eight have been convicted. And then sometimes when there’s issues that do arise, judges even resigned, but there are multiple processes and multiple checks and balances in place. And I think this is an example where I think there are processes that are happening right now. There are checks and balances. There is accountability, and there are investigations that are taking places in this instance.

Manila Chan:                       Now, in movies, sometimes judges are depicted as sorta, you know, these dirty judges, those who take bribes or, you know, are in bed with the mob and so forth. But in real life, is that necessarily really far from the truth?

Michael Bixby:                    I don’t think that it’s common, but I also don’t want to say it’s impossible and that it can’t happen. And that’s why we need to be very vigilant with it. And you can give examples. I mean, you can go back a couple of hundred years, early 1800’s where there’s judges who were impeached and removed for mental instability or intoxication on the bench, or even more recently in 2010, a judge was removed, a federal judge was removed. He was impeached, tried and convicted for taking bribes and making false statements and perjury. So it can happen. Again, I don’t think that this is something that, that is rampant. But you have to look at the system and make sure that the systems operating and working and that when you see something that’s wrong, when you see a judge who’s, I mean, certainly accepting a bribe is egregious and the law needs to come down very, very strongly on that. That would be inappropriate. And we have to make sure that judges are giving impartial and fair treatment for everyone. And that’s what the courts and ultimately if necessary Congress needs to do to ensure that we have a truly independent judiciary for all people.

Manila Chan:                       Exactly. I was just going to ask about that. I mean, right now, there, there is no real, I guess you want to call it a penalty or no real consequences for the federal judges found to be not impartial or, or found unethical. Is this an issue Congress needs to take up in order, you know, to put some sort of accountability out there to keep those judges honest, to keep them fair? Because I certainly don’t imagine that this is really on Congress’s docket.

Michael Bixby:                    Yeah. It probably isn’t. Congress certainly does have the power to step in. Although if you want to look for someone with a lower approval rating, Congress would probably fit the bill, than the judiciary. I would caution against Congress stepping in because it needs to be only when it’s absolutely necessary because the judiciary needs to remain independent. And I think that the self-policing response we’ll see from the judiciary in this instance, I think it’s going to be telling. I think, will judges own up to it and, and do better, I think that they will. And while I understand there’s some deflection you’ve seen in some of the responses, I see a number of judges who’ve come out and publicly said I was wrong. I should have recused, I didn’t. They’ve admitted their mistakes and owned up to it. And I think you’re going to see a much stronger enforcement coming from judges in general. But you get into dangerous territory when Congress is overly meddling in the judiciary, because you want them to be independent. You don’t want the courts to become politicized, politicized, either red, blue, or something in between. They need to be truly impartial. Justice needs to remain blind.