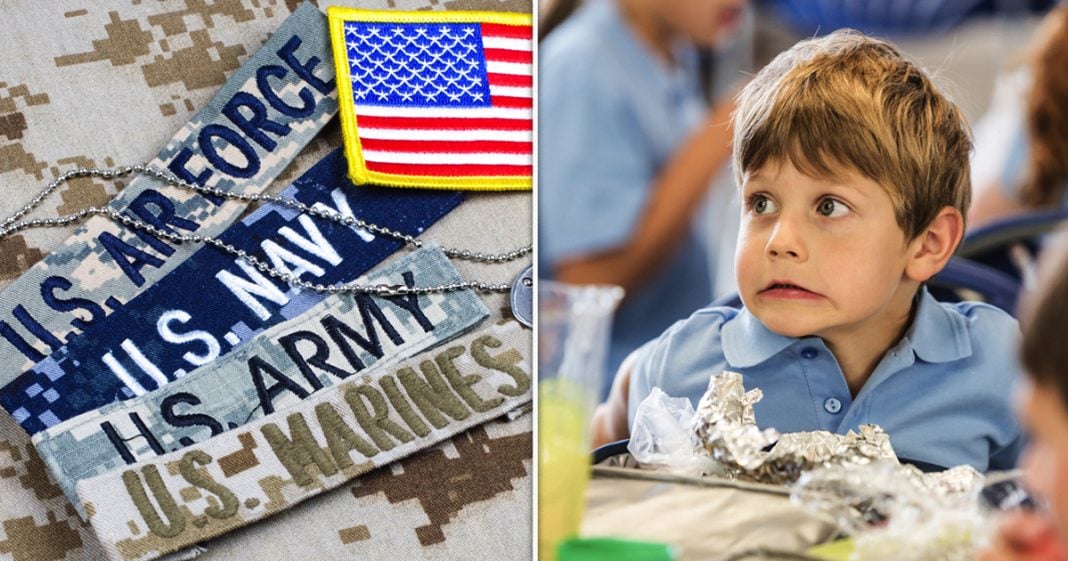 Via America’s Lawyer: After spending $2 trillion over the past 20 years, lawmakers on Capitol Hill aren’t letting the Afghanistan withdrawal get in the way of securing more military funding. RT correspondent Brigida Santos joins Mike Papantonio to explain. Also, a Wisconsin school board reverses its decision to cancel a free lunch program for students after facing nationwide backlash. Mike Papantonio and Farron Cousins discuss more.

Mike Papantonio:             The US occupation in Afghanistan is over, but that has not curved congressional warhawks, war pimps, from securing more money for the military. Brigida Santos joins me now to talk about this. This is, this is such a nauseating story, you know, as I look at it, Brigida. First of all, give me the overview, which members of Congress are pushing to raise war spending?

Brigida Santos:                   14 House Democrats have now sided with Republicans to pass a proposed GOP amendment to the national defense authorization act. The provision will add 25 billion additional dollars in annual military spending to president Joe Biden’s already bloated $753 billion military spending request for fiscal year 2022. Now a portion of the $25 billion will go towards weapons procurement to upgrade combat vehicles and to add more military ships, submarines, planes, and helicopters. The House armed services committee also voted to adopt an amendment requiring women to now register for the draft when they turn 18.

Mike Papantonio:             Yeah, the ugly part of this story is, is Democrats, you know, it’s not, they’re not silent on this. The Democrats that are also part of the war pimp machine, they’re sitting silent and letting the GOP push this whole thing, just like they did, what was it, three years ago, when the Pentagon says we don’t need any more money, but you had Congress saying, we’re going to give our war contractors, the people who give us money for our elections, we want to get them more money. That’s exactly what’s going on here. Has nothing to do with American security. Has everything to do with putting more money in these war pigs back pocket. What does the opposition say here?

Brigida Santos:                   Progressive members of Congress say US spending should prioritize domestic issues, including increasing vaccination efforts during the pandemic and addressing climate disasters. They condemn the increase to president Biden’s military spending request, which already calls for an increase over Trump era Pentagon spending. California rep Ro Khanna responded to the move stating quote, I don’t understand why we need at a time when we are withdrawing from Afghanistan, when we have been withdrawing from Iraq, a budget that is higher than at the height of the Cold War. But I listened to the hearing, the mark up hearing and during that hearing, lawmakers repeatedly used Cold War style rhetoric when insisting that the defense budget needs more and more money to counter the influence of China.

Mike Papantonio:             Yeah. And do not be fooled. This is not purely Republican. These Democrats, I’m glad to hear some out front on it. But there’s a ton of them that are sitting silently knowing, making promises to the folks in the weapons industry who give money to Democrats and Republicans that, yeah, we’re going to be silent on this and may have a chance of getting pushed through. My, my guess is that they’ll succeed with this. Now, this is during the time $2 trillion that we wasted in Afghanistan, we killed 240,000 people in Afghanistan. We now have left billions of dollars of weapons in the hands of the Taliban. This is like a train wreck that’s taking place in slow motion. How likely is the amended defense bill to pass in your mind? And what do you think is going to happen when it hits the full Senate?

Brigida Santos:                   Yeah. So they’re going to debate that this Fall, but if we’ve learned anything over the past two decades of occupation in Afghanistan, is that there’s a bipartisan consensus on war. That is one place where Democrats and Republicans consistently get along. And now that the Afghanistan chapter has wrapped up and Washington is shifting its focus to China, securing money for defense seems very likely at this point.

Mike Papantonio:             Do yourself a favor as this story develops, if you’re watching this program, keep up with the number of Democrats who sit silent on this and try to make it into a Republican issue. But those same Democrats are getting a ton of money from the weapons industry. It happens every time this occurs with let’s get more money to the Pentagon. Thanks for joining me, Brigida. Okay.

Mike Papantonio:             Finally tonight, some good news. A school board in Wisconsin has reversed their decision to cancel free lunch program for students after nationwide backlash when the district said that they didn’t want students to become spoiled by actually giving them food, if they didn’t have food. I’m joined again by Farron Cousins. Farron, I look at the story and I go, the rationale is, is, it’s vulgar.

Mike Papantonio:             It’s nauseating. We don’t want these kids who can’t afford breakfast. We don’t want to give them breakfast because it’s going to spoil them. And oh, by the way, this is really about the federal government messing with us. Isn’t that what it’s about?

Farron Cousins:                  Imagine a kid actually getting food every day. But no, there really was nationwide backlash. And I, I, you know, this was one of the times the media mostly driven, of course, by independent media.

Farron Cousins:                  Did a phenomenal job of covering this and putting the pressure on these people. And again, the Waukesha county here, they didn’t have to pay for these. This was all coming from the federal government. And that’s the problem is these people don’t want other people to know that we have the ability to provide for you. We can take care of you. We’re choosing not to.

Mike Papantonio:             You know, military $800 billion. We spent what, two and a half trillion dollars in Afghanistan. And we’re talking about feeding some kids who can’t have breakfast. And these freaks up in, what is it?

Mike Papantonio:             Waukesha. They say, oh, we don’t want to do that. The federal government is going to be involved. Go figure. Farron, thank you for joining me.

Mike Papantonio:             That’s all for tonight. Find us on Twitter and on Facebook @facebook.com/rtamericaslawyer. You can watch all RT America programs on DirecTV channel 321 and also stream them live on YouTube. Be sure to check out RT’s new portal, portable app, where we can watch all of your favorite programs. I’m Mike Papantonio and this is America’s Lawyer where every week we tell you the stories that corporate media is ordered not to tell because their advertisers won’t let them or because of their political involvement, it just doesn’t allow for it. Have a great night.