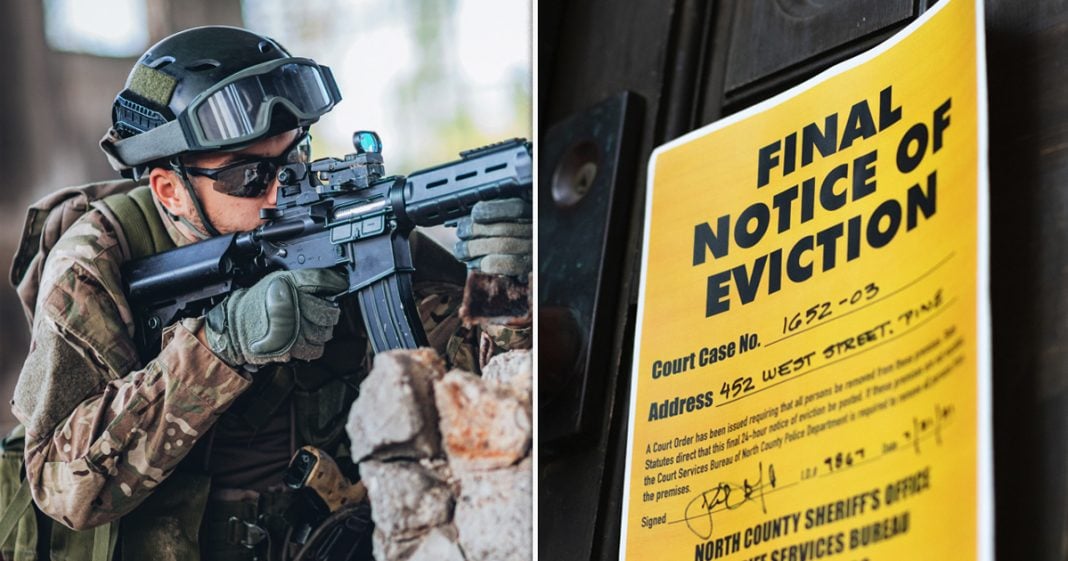 Mike Papantonio:             K street lobbyists are hoping that the chaos in Afghanistan is going to lead to a huge cash windfall for them and a new report suggests that they’re already getting that wish. Wow. What another ugly story. Anytime you see, anytime you see suffering, anytime you see chaos, you know what, it’s always an opportunity for, for Wall Street. This is their opportunity, right?

Farron Cousins:                  Yeah, it is. Right now, you’ve already got the major defense contractors that have ramped up their lobbying efforts because Afghanistan, let’s face it, it was nothing more than a cash cow for the weapons industry. And now that that cash cow has been put out to pasture. They’re saying, okay, well, we’ve got to get our lobbyists, we’ve got to go talk to Congress. We’ve got to get the White House involved. We got to find something new. But then even more disgustingly almost as you have these other countries, you know, a lot of them in the Middle East that have now already in the last two weeks, poured millions into K street.

Mike Papantonio:             You better give us money because we’re worried about the terrorists. Now, the studies that are done show that most of this money goes to the folks in charge. I mean, it doesn’t end up where it’s supposed to go. We give them tons of money. We give them tons of weapons. They sell the weapons to terrorists. They keep the money. But nevertheless, that does not stop K street lobbyists for saying, hey, this is a heck of an opportunity for us to make more money. Isn’t that kinda of way you see it?

Farron Cousins:                  Yeah. And it terrifies me because I’m, you know, I’ll call it right now. I think Biden, I think Democrats and I think Republicans will go along with these efforts because these countries are going to say, oh, look what you did to Afghanistan. We, we’re worried they’re going to come across our borders. Please sell us $500 billion in your weapons. And everybody will say, oh, we have to protect them, but we don’t want to send troops. So we’ll just sell you everything that we can possibly sell.

Mike Papantonio:             And, and, you know, it’s amazing the money that’s being spread around. And when the money does not go where the US government says it’s supposed to go. 23 PR firms and law firms right now are representing Saudi Arabia. It is like a cash cow gather time.

Mike Papantonio:             The Supreme Court has rejected the Biden administrations national eviction moratorium. Brigida Santos joins me to talk about this. You know, Brigida, I love when we’re right, we called this weeks ago when we did this story. Came out of the ninth circuit, they withheld it. We said, you know, Supremes aren’t going to allow for it. Sure enough they didn’t, six to three. Why did the Supreme Court shut down the latest eviction moratorium?

Brigida Santos:                   Exactly why we covered it before. The, the Supreme Court has ruled that the centers for disease control and prevention exceeded its authority in preventing landlords from evicting tenants during the pandemic stating that only Congress can take such action and Congress of course has not done so. Now at least 11 million renters have fallen behind on rent with nearly 4 million households at risk of eviction in the next few months. And of course there are still 7 million fewer people employed than before the pandemic. So without paychecks, we could soon see a massive wave of homelessness across the country.

Mike Papantonio:             I’ll tell you who is making money, Wall Street. The folks that have this rental property have never made so much money. They’re, it’s to the point where they’re giving CEOs $5 million bonuses, $3 million bonuses, because they’re bringing in so much money, 97% of the revenues coming back. Can states step in to help tenants from losing their housing?

Brigida Santos:                   Yeah, they can and the Biden administration is asking local officials, including governors, mayors, and judges to extend local eviction moratoriums, enact policies requiring landlords to apply for federal aid before kicking tenants out or delay evictions while renters apply for rental aid. But they’re not going to be motivated to do that because as of now, 89% of that $46 billion that was earmarked for emergency rental assistance has yet to be distributed to local governments. Now, some states have enacted temporary statewide eviction moratoriums, or given people extensions so that qualifying renters can have a little bit more time before facing eviction. Those states include California, Washington, Minnesota, New Mexico, New York, and New Jersey, Washington DC is also giving people a little bit more time. But eventually all those extensions are likely to end as well. And for everyone else currently, nationwide eviction protections no longer apply.

Mike Papantonio:             Yeah. I can’t say this enough, 97% of all the revenues that are out there are coming in. So they, you know, it’s, it’s, it’s a cash windfall for these folks. One of them is equity residential, okay. They represent 20% of the apartment real estate investment. Now you think it’s mom and pop, no, it’s these folks from Wall Street, 20% they represent. Then you have mid America apartment communities, they represent another 20% of the market. So all of, all this money, this, this is just a decision that is lining the pockets of all these Wall Street types. What resources are available for families who might be evicted?

Brigida Santos:                   The department of housing and urban development has a list of housing organizations for those in need of immediate shelter and emergency housing. Many states and cities are also offering financial assistance for tenants who are struggling to pay rent. People can find those relief programs online by visiting the national low income housing coalition website and government backed mortgage buyers, Freddie Mac and Fannie Mae, have prohibited landlords of multifamily properties with these types of mortgages from evicting tenants until September 30th. Now to find out whether you qualify, people can visit Fannie Mae and Freddie Mac and then put in their address or use the national low income housings federal eviction moratorium lookup tool.

Mike Papantonio:             Brigida, let’s, let’s hope that, let’s hope that maybe there are work arounds because right now this is a Wall Street windfall, and it’s putting people out of their homes. The next step is going to see rents going up. Thank you for joining me. Okay.