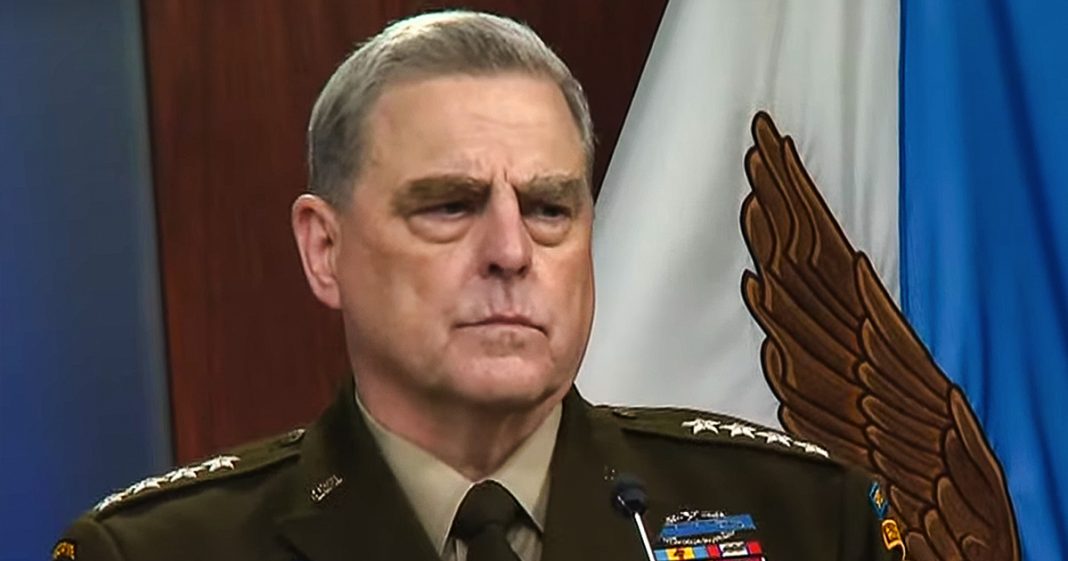 Mike Papantonio:             Dozens of retired generals are calling for the resignation of top military officials following the Afghanistan withdrawal that became a nightmare for everybody left in the country. Farron Cousins from trial lawyer magazine joins me now to talk about this. Strong language. I don’t know how language can get any stronger from these generals that said you really blew it. Milley, you really blew it. Biden you, I mean, across the board, it’s an attack. They described it’s like celebrating the Titanic sinking as the most successful lifeboat rescue in history. What’s your take on this story?

Farron Cousins:                  Well, look, I mean, there’s, there’s no question obviously and you and I have agreed on this, we needed to be out of Afghanistan 100%. but that doesn’t mean that we need to look at all the chaos that happened and said, oh, okay, no, this is a good thing. Milley, Austin, with the, secretary of defense, they were the ones who were supposed to be giving guidance here. They were the ones looking at the intelligence that our agencies have been putting together for 20 years and finally just said, okay, you know what, go ahead and just pull the trigger now. Just get everybody out. We’ll see what happens. And it’s their job though, it’s their job.

Mike Papantonio:             Part, part of the criticism is this was done by political decisions on their part. They didn’t want to rock the boat. They thought they were afraid that was going to hurt their political career. And so what you have, the bothersome thing when you really drill down on this, they had seven months to plan this. Okay. I mean, if, give, give Biden the biggest give you can give him, he had seven months to plan this. You had a bipartisan committee, Republicans, Democrats, who said, you know what, it might take as many as 14 months. But Biden understood that the midterm elections are coming up and he did this for the midterm elections. He did this so he could go on TV on Tuesday, pat himself on the back and say, great job. There’s no way to escape this. Look, we both agree, we had to get the hell out of there. We never should have been there at all except for corporate media helped put us there. We’ll talk about that in just a minute. But some of these quotes are, are just strong. I mean, the, here it is. The consensus of the disaster are that enormous, or they’re enormous and they’re going to reverberate for decades. These general said, the death and torture of Afghans has already begun and it’s going to result in a major human tragedy of major proportions. Another quote by the generals, the loss of billions of dollars in advanced military equipment and supplies falling into the hands of our enemies is catastrophic. Now our adversaries are emboldened to move against America due to the weakness displayed in Afghanistan. Terrorists around the world are emboldened and able to pass freely into our country through open borders on Mexico. I mean, look, we’ve seen generals attack the White House before.

Farron Cousins:                  Well, well, and some of, you know, what you were just reading there, that gets into a little bit, okay, you see the warmongering starting to come out with some of these people. Like, oh, because they mentioned, oh, Russia is now going to come. China is going to come. The immigrants are going to come.

Farron Cousins:                  The terror. So you know that part, you go, they go a little too far with that. And that is a little bit, you know, it’s their job. They, they get their promotions when they go out and do good in these wars. So there was a little self-preservation there too.

Mike Papantonio:             I mean, they, none of them were happy to get out of Afghanistan. I mean, you know, most of these folks, these generals that now a lot of them work for the, for the arms industry. They work for weapons manufacturers. Corporate news puts them up every night and they sell what it is they want to sell and that is, we need to get back in. Nevertheless, these attacks are brutal attacks.

Mike Papantonio:             I can tell you, I’ve never seen attacks like this where, attacking the White House this strongly and, and, and you know, I don’t, you can’t, you can’t blame them. I mean, whether they’re there to say this because they want to go back into Afghanistan or not, this was a major screw up that should have been avoided.

Farron Cousins:                  Right. So, honestly, if I’m putting down any partisan blinders and I’m looking at this as a political consultant, what I would be telling Joe Biden right now is make them resign.

Farron Cousins:                  You need a scapegoat. You need somebody to shift blame onto for this. And you’ve already got the public saying, we need answers. So go ahead and do it. These are people. Look, they’ve been around forever. They have been involved in multiple different administrations, you know, making bad decisions here and there, doing a couple of good things, I will say, Milley has in the past with setting up, you know, kind of modernizing the military to a degree. But.

Mike Papantonio:             He’s called a snowflake, you understand these are, these, within the military, they regard him as a snowflake. So now this is another opportunity to attack him, whether he’s a snowflake or not, I don’t know. But I can tell you he is an inept strategist and that’s, that’s what shows here.

Mike Papantonio:             Yeah. It could help, I mean, it’ll help those poll numbers at least. That’s, I mean, today his, you know, his speech. I don’t know. I don’t think it’s going to help poll numbers that much. But if you do get rid of the people and you say, look, I was taking advice from them. You know what really gets ugly though? Milley and, and, and Lloyd Austin say it wasn’t our fault. It was the fault of the CIA and the NSA because we had bad information. How in the hell do you have bad information when we’ve been there 20 years? I mean.

Farron Cousins:                  And when you’re talking about two organizations, their, their job is literally intelligence. And then they come back and say, oh, well, our intelligence was not good. So, okay, your agency is not good.

Farron Cousins:                 Biden could use this if he was a real transformational president, he could use this as the opportunity to tear it all down and build it into something that actually works. That isn’t, you know, this big spy agency for American citizens.

Mike Papantonio:             I just think that’s such an interesting observation. Milley and Austin say it wasn’t our fault. Wasn’t the president’s fault. It was the NSA and the CIA, the same people who brought us 9/11. Interesting. But, you know, at the end of the day, they’ve accused him of incompetence, negligence, motivated by political pressure and a need to do well, politically. Reckless disregard for American and Afghan lives in order to please the White House. That’s the, that’s the language that’s out there. So I think you’re right. I think he needs to get the hell rid of these guys as soon as he can.