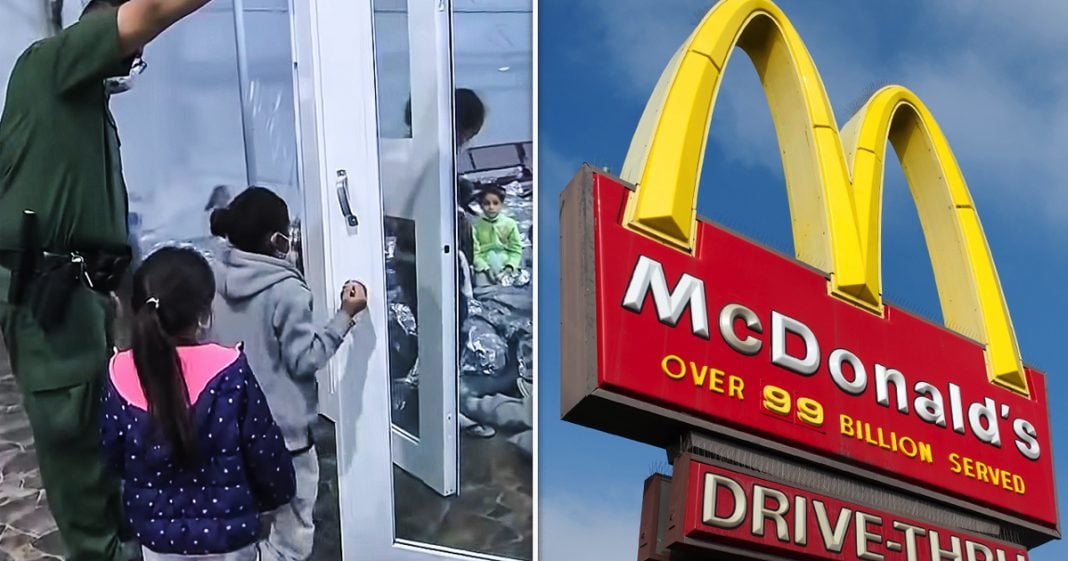 Via America’s Lawyer: Biden’s administration is sued over horrendous conditions at federal holding centers. Mike Papantonio is joined by President of the American Immigration Lawyers Association Allen Orr to discuss just who in the government is ultimately responsible for protecting the welfare of these unaccompanied minors. Also, a McDonald’s franchise in CA agrees to settle a 2020 lawsuit by providing its employees proper PPE, paid sick leave, and improved restaurant sanitization. Mike Papantonio and Farron Cousins discuss more.

Mike Papantonio:             Since 2018, we’ve seen images of migrant children crammed into cages after being separated from their families. Now, the Biden ministration is being sued over horrendous conditions at the federal holding centers, which currently has a record number of children and they’ve become a breeding ground for mental illness. President of the American Immigration Lawyers Association, Allen Orr, joins me to talk about this. Allen, you know, I, I’m amazed. We saw every day, there was a story during the Trump years about how this, this very kind of thing, these very stories, these very fact situations, corporate media is not covering this. For those who aren’t familiar, could you explain exactly what the Flores agreement is and why it has to do with this story?

Mike Papantonio:             So, Allen, here’s, here’s the question. This is no different from what the media was so crazy about. Every day, Trump, Trump bad this, Trump bad this, Trump bad, this is the same thing, maybe even worse. Now the Biden administration is being sued over violations of this agreement and what exactly are the lawyers for these migrant children alleging? Because it doesn’t sound any different from what we heard just three years ago.

Allen Orr:                                Well, it’s a little bit different. So I’ll make those distinctions. But the final result is basically the same, which is meaning we’re not meeting the standard that we’re required to meet by law. Under the former administration, all of these children wouldn’t even be in the United States. They would have been turned away at the border. They would not have had, unaccompanied or accompanied, they would not have been allowed in. So that’s gage number one. So the Biden administration has allowed these people into the country and to care. The Biden administration has changed the custody of these children from being in an ICE detention center to help the human services, health and human services has the responsibility of being better caretaker than the detention centers. However, they’re not meeting the standard. So therefore there are housing conditions. There are food conditions that are not being met and as well as the just matriculation and also just the processing of the children. And that is the problem. The surge that has happened at the border has created this condition.

Mike Papantonio:             Yeah. The stories I’m seeing are, these aren’t minor stories at all. They’re, you got, you have children that have been there 60, 90 days that are having mental illness problems having to be canceled, counseled, having to be put on medication for, for how bad the situation is there. I mean, am I getting that wrong? Because that’s what I’m reading.

Allen Orr:                                No, you’re getting it right. And the point of it is the intent is a little bit different between the two administrations from the, a lawyer’s perspective. But as you know, we have sued the government based on having the same conditions. So even a trial and failure at this case is still a failure.

Mike Papantonio:             Well, we’re six months into the Biden presidency at this point and we, how’s the situation along the border changed? You’ve pointed out, he’s letting the children in, but once they’re in, they’re being caged for 60 to 90 days under situations that are causing mental illness. I mean, this, this is what I’m reading. Now, please correct me if I’m wrong. These kids are suffering mental illness because of the conditions there. They’re having to be counseled. They’re having to get medication because of their mental illness. Did I get that wrong or did the story get it wrong? What, what am I missing here?

Allen Orr:                                I think the condition is not, the answer is there are problems that need to be fixed. The intent is not suffering the immigrants as it wasn’t in the first administration or the prior administration. It’s a little bit different. It’s not a deterrent situation. It’s a failure of duty in this situation. And the problem is not exactly stemmed to the border. It’s always stemmed at Congress. Congress needs to implement and change our immigration rules to allow these individuals to have their asylum, their day in court and better processing. That’s an overall problem for Congress to address. The Biden administration under his current policy has to figure out a way to manage immigration. There’s not just immigration at the Southern border, but there’s immigration around the world right now. And COVID has hindered the process for a year. So state departments have been closed and visa processing has been delayed, and this is a serious struggle for the Biden administration to step up to and they need to find a solution.

Allen Orr:                                I think HHS wasn’t prepared. I mean, that’s the appropriately, it’s just mismanagement at this point to make sure that things are done appropriately. And really, for most of us, we don’t believe that kids should be detained at all. There are probably a lot of community service places that can help pick up where we need to, but all the money we have to do other things, we could get this, right. And it’s only going to get worse.

Mike Papantonio:             Okay. So we’ve got 800 kids there that are unoccupied, they’re unaccompanied children. And on top of that, you’ve got about a, a, you got about a thousand more kids that are in these camps. So right now it’s balls in HHS’ court, the lawsuits pending and that’s their only, the only chance of really turning this around. No education, no echo, recreational services, under cooked food. No, the, the, the list goes on forever. Okay. So you, you followed this story a long time under the Trump administration. Now we’re dealing with the Biden administration. What are your chances, what are the chances of this lawsuit succeeding?

Allen Orr:                                It’s going to be successful. We’re talking about children and we’re talking about the United States. The policy has been clear for 20 years. It wasn’t working under the Obama administration. It wasn’t working under the Trump administration and it’s not working now. So we need to right-size the standard and step up to our, what we’ve assumed as an obligation, because either we could turn them away or which we, which we have humanely decided that we’re not going to let unaccompanied children’s returned to whatever damages there were outside the United States, which may be worse than what they’re seeing in these detention centers, or these facilities by HHS. And so therefore we need to figure out the right solution and part of that is figuring out how immigration should work overall. And so that people won’t send their minors unaccompanied to the border any longer.

Mike Papantonio:             Finally tonight, some good news. A McDonald’s franchise has agreed to a major settlement that could have nationwide implications for fast food workers in the COVID era. Farron Cousins joins me again to talk about this case. You know, I remember we did a story early on in this, I don’t know if we talked about this, but McDonald’s was handing out dog diapers and they were handing out coffee filters to their employees to use as masks.

Farron Cousins:                  And of course, you know, they, at the same time, letting their employees get assaulted for telling customers, you had to wear a mask. But so this is a really great decision here. You’ve got this, it’s a single franchise out in California, but it does have nationwide impacts here because they finally agreed, okay, listen, we’ll give you real masks. We’ll give you the latex gloves. We’ll give you paid sick leave. Which is huge.

Farron Cousins:                  And so hopefully, we’ve already seen some inklings that the whole McDonald’s corporation may start moving in this direction. There is a big fight to try to make that happen.

Farron Cousins:                  It really is. And so if we can get these people protected, you know, they already have a difficult job where they’re treated insanely poorly. We have talked about the abuse they suffer plenty of times. So this is a great step for them and a victory for workers.

Mike Papantonio:             That’s all for tonight. Find us on Twitter and on Facebook @facebook.com/rtamericaslawyer. You can watch all RT America programs on Direct TV channel 321. Also stream them live on YouTube and be sure, check out RT’s new portable app, where you can watch all your favorite shows. I’m Mike Papantonio and this is America’s Lawyer where every week we tell you stories that corporate media is ordered not to tell because their advertisers won’t let them and because of their political affiliations don’t allow them to tell the story. Have a great night.