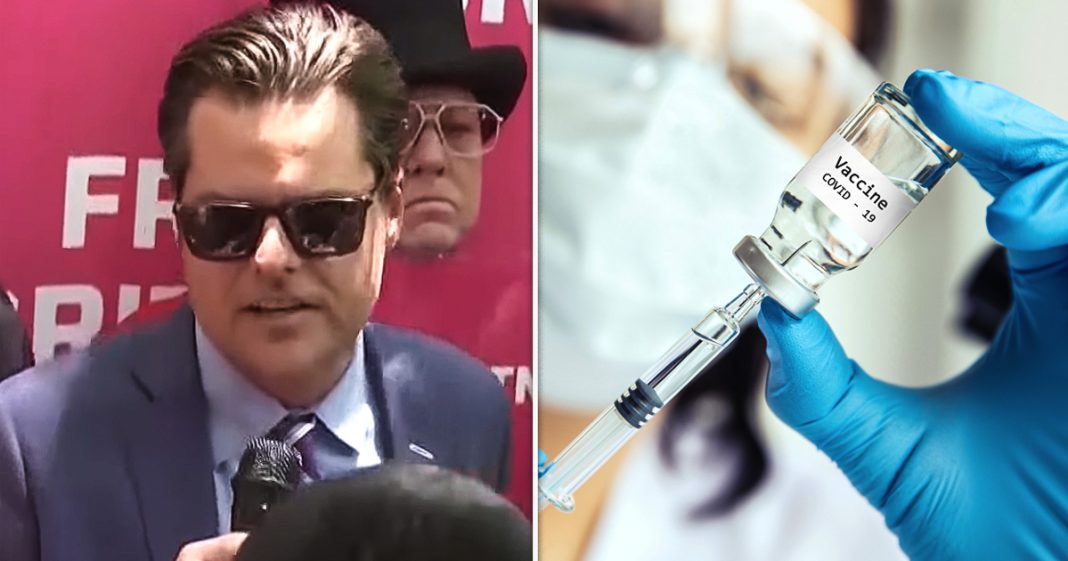 Mike Papantonio:             More information emerged last week in the Matt Gaetz scandal with new evidence directly implicating the congressmen in potential criminal activity. You have followed this story more than any reporter in America, take it from there.

Farron Cousins:                  You know, I was actually starting to lose faith in the investigation. I thought for sure, Matt Gaetz may have already gotten away with this and then of course, last week, big story breaks from ABC news. Listen, uh, turns out Joel Greenburg, the indicted Seminole county tax collector who’s good friends with Gaetz, has been turning over thousands of pieces of evidence. This includes videos, photographs, text messages, emails, everything you could possibly want and yes, according to some of the evidence that has, I guess been leaked, it does appear to directly implicate Matt Gaetz in this, you know, underage sex scandal.

Mike Papantonio:             Here’s the problem I’ve said, it’s time, we have a DOJ department of justice that has no courage. If it’s not low hanging fruit, the trial lawyers will not go to trial to try a case. It’s got to be a lock stock deal where they know absolutely 100% they’re going to win. That’s how they think at the department of justice. Otherwise there would already be indictments flying. Don’t you think?

Mike Papantonio:             Okay. I got, I got Matt Gaetz is my pal. We want to meet with you and they want to meet, they want to meet at, and Jason Pirozzolo. Jason Pirozzolo was the guy who led the medical marijuana fight in Florida. So they want to meet over at Jason’s house with a little ecstasy, I guess, the way these emails read. This is a craziest story I’ve ever seen. And for the department of justice still be saying, I don’t know if we got enough. My God, we go to trial with a fraction of that kind of thing in what we do.

Farron Cousins:                  So the fact that this man is still allowed to travel the country with Marjorie Taylor Greene, giving ridiculous speeches. No, I mean, we’ve got the evidence. Let’s make it happen.

Mike Papantonio:             Supreme Court justice Amy Coney Barrett has refused to block a plan by Indiana University to require students and employees to get vaccinated against the Coronavirus, to attend classes or keep their job. Brigida Santos joins me now to talk about the details. Brigida, first off, break down justice Barrett’s decision for us if you would.

Brigida Santos:                   Associate justice Barrett handles emergency cases for the US court of appeals seventh circuit, which includes Indiana. Now she acted on her own in rejecting a plea from eight students seeking exemption from Indiana University’s COVID vaccine mandates. The students claimed they have a constitutional right to bodily autonomy and of medical treatment choice. Justice Barrett did not offer an explanation for her decision not to refer the case to the full nine justice court, but throughout history, state Supreme Courts and lower federal courts have consistently upheld vaccination mandates as a condition of school attendance or job employment. So far the US Supreme Court has declined to interfere with those decisions as we’ve just seen again here in the case of Indiana University.

Mike Papantonio:             Yeah. I don’t think there’s any earth shattering qualities about this opinion. She’s just relied on a lot of precedent for making this kind of decision. Vaccine mandates aren’t new. Where have they been implemented? We time after time, we’ve seen them implemented into, there’s some suggestion that she, she did something untoward here. No, she didn’t. She followed the precedent that’s been out there long time. What’s your take?

Brigida Santos:                   Absolutely. Today, all US states and territories have vaccination requirements for children to attend schools and childcare facilities. Most schools require vaccines for things like measles, polio, chicken pox, meningitis and whooping cough, and these requirements are legal. Nearly 100 years ago, the Supreme Court issued a landmark ruling in Jacobson versus Massachusetts upholding the right of states to compel vaccination as a reasonable exercise of police power to ensure public health. Back then the court rejected the idea of a personal choice exemption ruling that vaccine mandates do not violate the 14th amendment because the constitution doesn’t give every person the absolute right to be wholly free from restraint at all times, especially when it comes to the safety of society.

Mike Papantonio:             Yeah, you got that right on the head. I mean, it was just a perfect analysis of what the law, how it’s developed and where we are today. What did the courts say about religious exemptions from vaccination requirements?

Brigida Santos:                   The US Supreme Court has yet to directly address whether a person has a constitutional right to refuse vaccination on religious grounds, but rulings in other SCOTUS cases provide clues as to how it could rule in the future if it chooses to finally hear a relevant case. For example, in 1944, SCOTUS heard a case involving child labor under an asserted right of religious freedom. The court ruled that neither the rights of religion or parenthood are beyond limitation and that the state can restrict parents’ control by prohibiting child labor, requiring school attendance and other things. It gave the example that a parent cannot claim freedom from compulsory vaccination for a child on religious grounds, because the right to practice religion freely does not include liberty to expose the community or a child to communicable disease, ill health, or death. That being said, today 48 states do allow religious exemptions by statute, and the courts are mixed over whether states can actually do so.

Mike Papantonio:             Brigida, I get, as I listened to you, it’s as if you were in constitutional law classes with me, that was a perfect evaluation of where we are on vaccinations. Very nice recap there. Very nice job. Thank you for joining me. Okay.