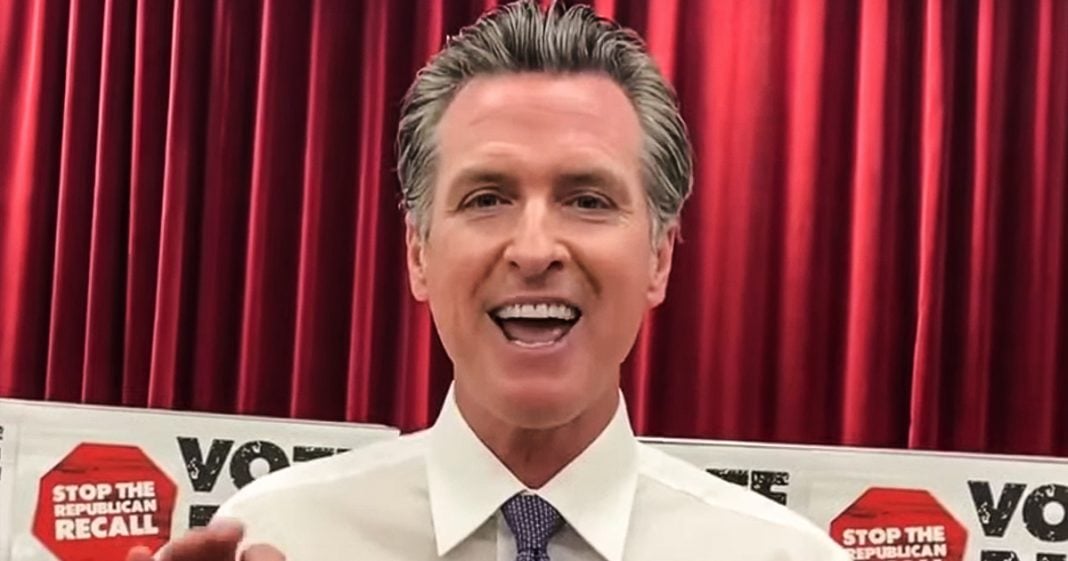 Via America’s Lawyer: California voters head to federal court over the upcoming recall election for governor. They’re insisting the process is unconstitutional and is specifically designed to oust Gavin Newsom. RT correspondent Brigida Santos joins Mike Papantonio to explain why some believe the special election to be rigged against Governor Newsom.

Mike Papantonio:             Two California voters have filed a federal lawsuit claiming the state’s upcoming recall election is unconstitutional. They’re asking for the court to add governor Gavin Newsom’s name to the list of successor candidates, or to cancel the special election all together. Brigida Santos joins me to talk about this story. Brigida, for those who don’t know, how does California’s recall process work?

Brigida Santos:                   Well last year, California voters got enough signatures to secure a special gubernatorial recall election on September 14th. So now voters in the state will be presented with two questions on the ballot. The first question is, should governor Gavin Newsom be recalled and removed from office? And the second is, if so, which candidate should replace him. Now under California’s constitution, if the majority of voters cast ballots in favor of the recall, governor Newsom will be removed and his successor will then be the candidate who receives more votes in question two than any other candidate, but does not receive an absolute majority of votes. Incumbents are not allowed to be listed as candidates in the second recall question. So if a majority of voters vote to recall Newsom, his challenger will become governor, even if that person receives less than 20% of the vote as expected. And if Newsom had received 49% of the votes to keep him in office in that first question.

Mike Papantonio:             You know, I, I looked at this and I, you know, what, first of all, what constitutional rights are being violated? And I read this article and they’re relying on equal protection and I don’t see that argument here. I, this is, this, this thing, the ninth circuit may say, yeah, we’re gonna, we’re gonna call this off for now. They’re going to send it back to legislature, maybe to get it right. But equal protection doesn’t ring a bell here for me. What, how do you see that?

Brigida Santos:                   Sure. The plaintiffs are basically arguing that California’s recall law violates the equal protection clause of the 14th amendment specifying that every voter gets an equal say in determining election outcomes, as you just pointed out. California’s recall process basically gives the votes of those who choose the new governor two or three times the weight of the votes of those who want to keep him in office. And since incumbents cannot be listed as candidates in that second question on the ballot, this effectively disenfranchises Newsom supporters. That’s the argument here.

Mike Papantonio:             Yeah. I, I think they probably could come up with something better. I think the ninth circuit’s going to give Newsom a pass on this, would be my call, send it back to legislature and let’s see what they do with it, I think is going to be the argument. How real is the possibility that Newsom is recalled if this goes forward?

Brigida Santos:                   Well, recent polls compiled by FiveThirtyEight showed that 48% of registered voters in the state want to keep governor Newsom in office and 43% want to recall him. While the governor maintains a small lead, a UC Berkeley LA times poll finds that 80% of registered Republican voters say they are absolutely voting in the recall election compared to just 55% of Democrats and half of independents. Newsom’s opposition is fueled partially by the state’s COVID restrictions and lockdown measures, but mostly unhappy voters say the governor failed to adequately address homelessness, income inequality and wildfires. And currently conservative talk radio host Larry Elder leads the opposition with 16 to 18% of the vote. It is not impossible at this point that he could win, even with those numbers.

Mike Papantonio:             Well, you live out there. You’re seeing the mass exodus from California. It’s amazing whether you’re talking about taxes, wildfires, infrastructure. It sounds, it sounds like a mess out there. You’re in LA, maybe you don’t see that firsthand, but that’s what the media certainly portrays. And I’m wondering with less than one month until the election, how likely is this lawsuit to play itself out in court and what do you think is going to land?

Brigida Santos:                   Well, the US Supreme Court has long protected the democratic process and principle of one person one vote. However, the high court has repeatedly stressed that federal courts should not get involved in election processes before the vote. And as of now voters have yet to challenge the upcoming recall in the California Supreme Court, which would actually be much better suited to handle legal challenges in time for the election, even so, the state Supreme Court previously upheld California recall rules in lawsuits stemming from governor Gray Davis’ ousting in 2003, when it rejected a challenge citing the equal protection amendment. But the court’s decision then was about whether to take on the lawsuits. So no precedent has yet been established regarding the principle of one person one vote in California’s recall law. But the clock is ticking. Time is running out. Ballots have already been mailed to voters. The state legislature, as you said, and constituents have had nearly 20 years since California’s first recalled a governor, to vote to change the law, but they have not done that. And until they do, they’re probably going to just continue gambling on these last minute lawsuits to settle this issue.

Mike Papantonio:             Mm. Yeah, you may not, you may not see it, maybe, uh, maybe the broad media is just getting it wrong, but it does look like a mass exodus from California because of something, whether it’s Newsom or what. There seems to be, that seems to be what’s going on. Thank you for joining me, Brigida.