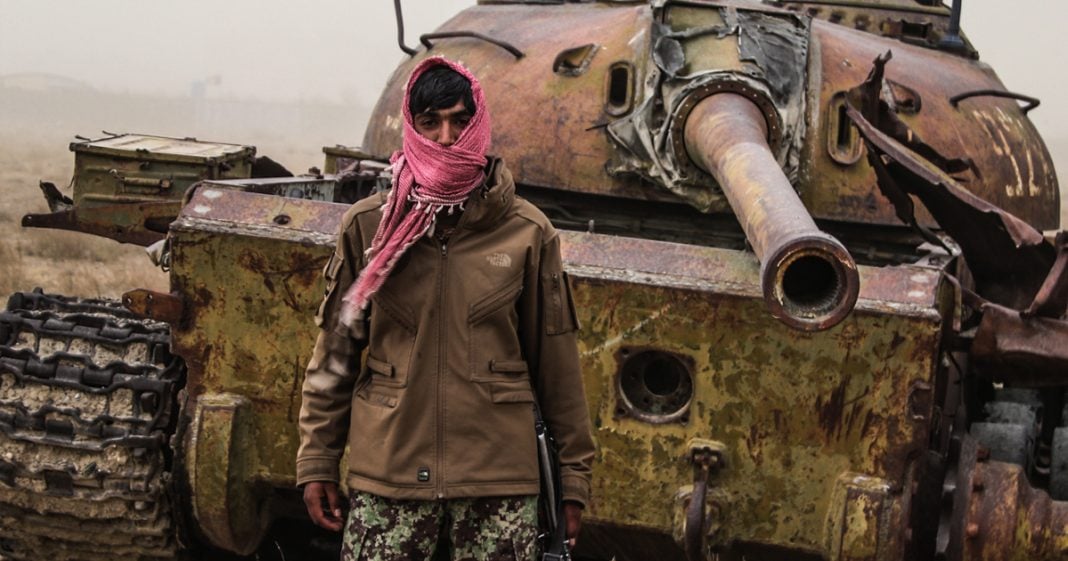 Mike Papantonio:             The Taliban has now secured billions of dollars worth of weapons and biometric materials that the US had stored in Afghanistan. What a disaster. Here’s the short list. They’ve got attack helicopters. They’ve got, they’ve got Humvees. They have 200 US assault aircraft. They have grenade launchers. They have bombs. They have, you name it that, you know, now 200 US aircraft. These folks that we just saw on the screen a minute ago, they’re trying to say, oh, don’t worry about that. They don’t know how to use it. It’s not about using it. They’re selling this to terrorist all over the world now. Biden understood that he had that much, that many weapons, that, that volume of weapons there, did nothing to get them out before all this started. Just like he left people there. He left all these weapons there. Where are these weapons going to end up?

Farron Cousins:                  They’re going to end up some, Taliban is going to keep the good ones for themselves, but they’re going to sell it over in Syria and prolong all of that. They’re going to sell it to Al-Qaida. They’re going to sell it to ISIS. And the reason we know this is because you and I have sat right here or stood right here in these same positions talking about how Saudi Arabia takes United States weapons, sells them to those same groups of individuals, because this is what happens. And the US military industrial complex, they know this. They know every time we talk about a $400 billion arms sale to the Middle East, it’s not because that country needs that many weapons. It’s because they turn around and they sell them. They give it to the bad guys who then use it to kill Americans. And now the Taliban, they don’t even have to make a deal with the United States. They’ve getting, getting what, $82 billion, I guess, worth of weapons for free and we’re talking tens of thousands of vehicles. We were supposed to be sending more airplanes there in about a month or two.

Mike Papantonio:             Make sure your people are safe. You secure your weapons and then you start what should have been a 16th month, 16 month process. We talked about last week, there was a bi, there was a, there was a committee put together that was, that decided how this should have been done. Everything that committee recommended was ignored by this administration. So let me get to the real ugly one, biometrics talk about it.

Farron Cousins:                  Right. This is one thing we, we learned again, two great reporters at the Intercept, Ken Klippenstein and Sara Sirota. The Taliban now has their hands on US biometric devices. And in these individual devices is stored all of this information on the people who helped the United States in Afghanistan, who helped us fight against the Taliban and now the Taliban has it. So they can go up to people, you know, do their iris scan and it’ll tell them right there on their little screen, whether or not this person ratted out the Taliban, fought against them. And as we know that, they’re going to use this information to kill people.

Mike Papantonio:             It’s already happening. I mean, the media, some, not, not corporate media. You’re seeing it in media of international media that’s over there. They’re going house to house. They’re pulling people out of their home. They’re taking the children and selling them as children brides to the Taliban. They’re executing the husband. They’re raping the wife. Now they have this biometric system that’s going to allow them, it gives them the total file. They run it across somebody’s fingers. They can tell from that, from, from those, from that impression, everything that person did for the US military. So here’s, here. Let me, let me, let me wrap it up this way. Taxpayers paid for these huge weapons buys from the, from, from the weapons industry. Weapons industry made billions of dollars. They create this great arsenal now for terrorists that are going to be used all over the well, all, all over, all over the world. And in the, in the meantime, you’re going to have a weapons industry that still making profits as we sell, as we sell, continue to sell, even as we speak.