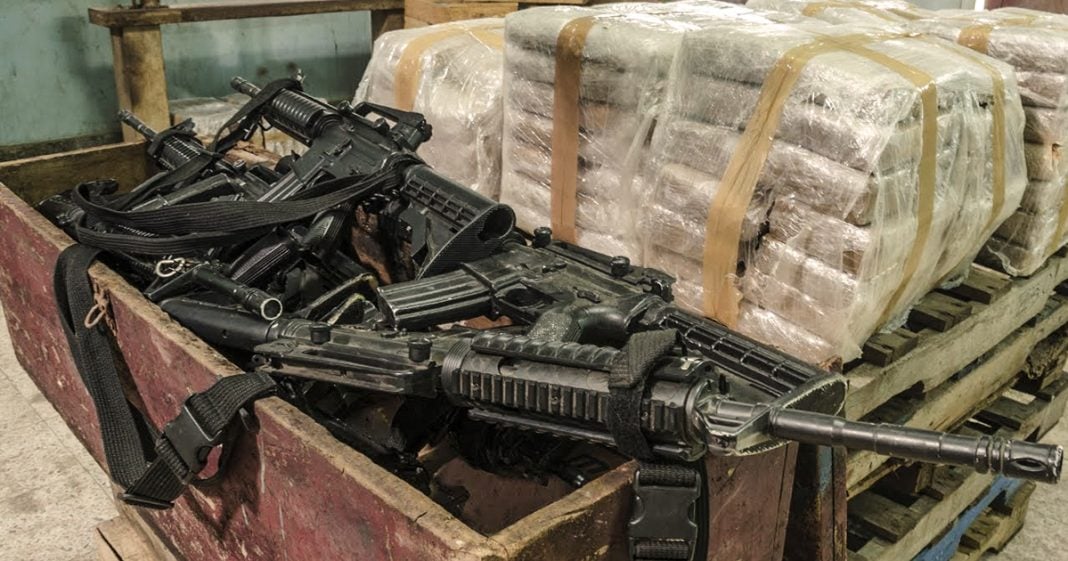 Via The News with Rick Sanchez: Mexico is suing 10 US gun manufacturers in Massachusetts federal court. The suit alleges that these companies wantonly profit by fatal gun violence in the country by knowingly arming the drug cartels that plague the country. Legal correspondent Mollye Barrows explains.

Mollye Barrows:                In June of last year, hitmen with the Jalisco New Generation Cartel, ambushed police in Mexico city in an attempt to assassinate the police chief. They were armed with a slew of automatic and semiautomatic weapons, including caliber sniper rifles and pistols. The police chief was wounded, but survived the bloody shootout while two officers and a civilian were killed. The incident is described in the lawsuit Mexico filed against US gun manufacturers and distributors in Massachusetts federal court. The lawsuit says the companies are not only negligent, but they knowingly quote, design, market, distribute and sell guns in ways they know routinely arm the drug cartels in Mexico. The defendants include Smith & Wesson, Barrett, Ruger, Colt, and several others. Drug cartels in Mexico are armed like military special forces with most of their weapons coming from across the border. The Mexican government is suing for damages in an effort to hold gun makers responsible for the toll the violence is taking on the country.

According to the US government, an estimated 200,000 firearms are illegally trafficked in from the US every year. The problem of gun violence is widespread. In 2020 alone, there were nearly 25,000 homicides in Mexico caused by guns. And most of the weapons found at crime scenes are traced back to the United States. While access to guns may be commonplace in the US, in Mexico it’s nearly impossible for citizens to buy one legally. There is one firearm store in the country and it’s owned by the military. According to the Mexican government, the store issues fewer than 50 permits a year. Still, the bloodshed continues. The lawsuits give several examples of manufacturers, allegedly tailoring products to cartels, pointing to a gold-plated pistol with a Zapata quote, it’s better to die standing than to live on your knees. This was also the same weapon used to murder a Mexican investigative journalist in 2017. So far US gun manufacturers have not commented on the lawsuit, which estimates Mexico has suffered some 10 billion in damages from economic loss.

Rick Sanchez:                       Joining us now live in Pensacola, Florida is legal correspondent, Mollye Barrows. She’s also a contributor for the hit show America’s Lawyers right here on RT America. It sounds from everything you just said in your report that they have a pretty good case that the only reason people in Mexico, including the really bad guys have guns, is because they come from us from our country, right?

Mollye Barrows:                Yeah, you’re exactly right, Rick. I mean, there’s no question that both governments know, the US government and the Mexican government know, that the majority of hand guns, any weapons, if you will, come from the United States. The United States government estimates about 70% of the weapons are from the US and the Mexican government says, oh, no, that’s much higher. We’re talking 90%. So it certainly can be traced back to the United States where these guns are coming from, but the real issue is can they make this lawsuit stick? So it’s interesting, you know, the gun lobby, lobby, gun industry lobbied hard a number of years ago when they were facing a lot of suits back in the 1990s, Rick, and you probably remember that as well. And in 2005, they were successful in passing the protection of lawful commerce in arms act. So that basically gives them blanket protection from lawsuits, the gun manufacturers, as well as the dealers from civil litigation.

But there is a loophole. And it’s so interesting that it is actually the Sandy Hook shooting that the Mexican government has been watching closely because parents of victims in that horrible shooting, found that they, they went ahead and they took advantage of that, that one little weakness in the law that basically said, hey, you can go after people if they marketed, or a gun manufacturer, if they market it to the wrong person. Like say the way they market it, one person was accountable for shooting all those kids and they, they basically found some footing within the Supreme Court that allowed this lawsuit to move forward. The Mexican government has been watching that lawsuit closely, and they’re making a similar argument in this particular lawsuit.

Rick Sanchez:                       You really know this stuff, Mollye, boy, it’s great. I’m so glad you got this story nailed down for us because, I mean, it seems to anyone who looks at this, like we really have some making up to do, or at least somebody has some splaining to do when it comes to all these guns that are being used to kill innocent people in Mexico that are all coming from our gun manufacturers, by golly.