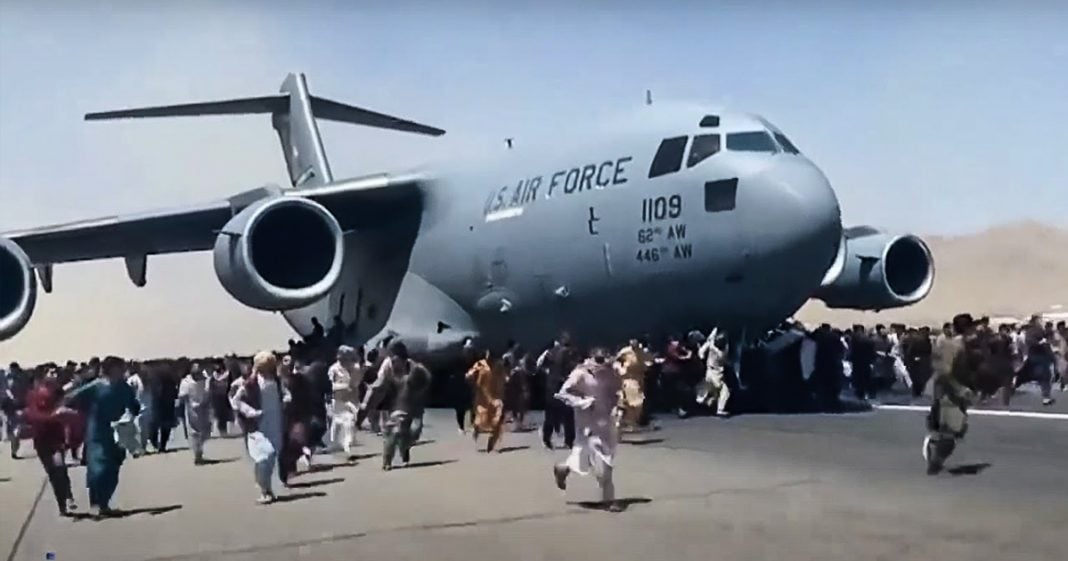 Via America’s Lawyer: After President Biden finally pulls the plug on the U.S. occupation of Afghanistan, Taliban forces quickly overwhelm the country – undoing the past 20 years in a matter of weeks. While American troops are able to evacuate, they leave behind countless Afghan civilians that are faced with the choice of either fleeing the country or living under Taliban rule. Mike Papantonio and Farron Cousins discuss more.

Mike Papantonio:             The Taliban has taken Afghanistan after the US pulled our troops out of the country, capping off a 20 year war that the US had no business fighting in the first place. Farron Cousins from trial lawyer magazine joins me now to explain why. You know, Farron, it’s not, it’s not the fact, we needed to get out of Afghanistan. We’ve made our, gave it our best shot. We needed to get out. We accomplished a lot, but had to get out. And so, so we have the collapse. It’s the exit strategy that is the issue here. There was no plan. It was like a bunch of buffoons said, hey, let’s get this done before the midterms. We got to do it in a hurry and look what’s happened.

Mike Papantonio:             Well, I mean, you know, it is midterm, but we’re talking about midterm issues here. So this, this, this bonehead general Milley right, tells the public, we can do this. This is no problem. Biden joins in and says, oh, I’m not worried about the Taliban. We’re stabilized enough. The president of the company loads up as much cash as he can get into his car in his helicopter, steals all the cash, leaves town, 90,000 Afghans who helped the United States for, for about 20 years, stabilize that country, they all are now being hunted down by a pack of wild dogs, psychopath, wild dogs, door to door. Is this, they’ve got a checklist. They have a checklist, Farron. This is, this is our exit strategy.

Farron Cousins:                  Right. And we knew this is what would happen if we exited the country like this. And we had, you know, like we said, more than enough time to do this. You know, you go back to February 2020. That’s when Trump, you know, worked out this deal with the Taliban saying, listen, we’ll release some of your prisoners. You agree to not attack us. You don’t attack NATO forces. We’ll be gone from the country in 14 months. Now the issue with that deal, however, is that it obviously excluded the Afghan government. They were not involved in the negotiations or the discussion. So that was a, a big problem with it. But still 14 months we’ll be out of the country, which would have been April of 2021. So we had the time and we had the opportunity. This was something that should have been discussed very clearly during the transition period and Biden should have known from day one, you’re on the clock here. You’ve got to get this done. You have time. I mean, that’s, you have time.

Mike Papantonio:             It was a bipartisan committee that was put together to figure out how do we pull out of Afghanistan, bipartisan. They came up with a plan. It was going to take 16 to 18 months. All right. The plan’s been on the table a long time. The plan was, first of all, we have to create a beach head. The beach head, the beach head is where, we’re, we’re not, we’re not, we don’t have Taliban that are attacking the airport as we’re trying to get people out of the airport. The beach head is you have enough troops to maintain some order. That was part of the plan. Now, MSNBC, this was incredible to me, MSNBC, I swear to you reported that this is a really peaceful withdrawal. Did you see the report? This is a peaceful withdrawal. Why don’t you give me your take on what the withdrawal looked like.

Farron Cousins:                  It, it’s utter chaos. It’s madness. And this is, you know, again, very predictable. We had been told if we just exit the country like this, that something like this could happen, but of course, as you pointed out, we’ve got the generals telling us, oh no, everything is under control. We’ve got this wonderful military that we’ve been training for 20 years. We spent $87 billion just on training that military. We’ve got this good Afghan president. So don’t worry. The government’s secure. And the president left the country this week and, you know, evacuated. Just left the palace, I guess, for Taliban to come in. There’s videos of them now hanging out in the gym, inside this presidential mansion, having fun. One’s got a rocket launcher on his back while they’re doing exercises. They, this, this is almost a game to them and they unfortunately appear to have won in Afghanistan. And I do want to make it clear. We had to get our troops out 100%.

Mike Papantonio:             What kind of message is this to these folks that, that bet everything on the American occupation. We want to change Afghanistan for the best. We don’t want these wild rabid dog radicals in power and so we want to help you. Okay. Now there was a computer list that was put together a digital computer list, apparently from what I’m reading, that basically is like a roadmap for the Taliban to go door to door and figure out who they are, rape their wives, take their children as, as human slaves, kill out, I suppose, just kill or behead whoever’s was on that list. We knew that going into it. Biden stands up and says, this, this really, really me off. Biden in his speech says, well, we had to, we had to do this sometime. It’s like, we have to pull the bandaid off at some point, really? Okay. Really? If you knew that, and you knew the ending to this story, which apparently he did, he said this was never going to end well, basically. Why, why, why for eight years, as vice-president under Obama, why didn’t they do it then? He was been, he’s been in Washington for 45 freaking years. Okay. And he’s telling us, well, we knew this was the inevitable ending. Really? We knew this was the inevitable ending and you did nothing for eight years as vice-president. How many Afghans died during that period? How many us soldiers died? How did we get so upside down because he couldn’t make that decision eight years ago, 10 years ago.

Farron Cousins:                  Right. Or even when he was serving as a Senator, going along with these plans to invade Afghanistan, you know, and I think, unfortunately, one thing that’s also been overlooked in all of this is the role of the Bush administration.

Farron Cousins:                  George W. Bush’s name wasn’t even mentioned this past Sunday on those Sunday political talk shows where all they did was talk about Afghanistan. And you cannot address this issue without bringing up the failures of that administration.

Mike Papantonio:             And now, and now it’s so bad, it is literally, let me land this with this. The experts say it would take the 82nd airborne, the full 82nd airborne, just to get these people out alive. That’s how serious it is and this man stands up in a speech yesterday where he, by the way, takes no questions, no questions. He gives this, this written speech and then walks away like everything’s okay. Me off so bad, I can’t even see straight.