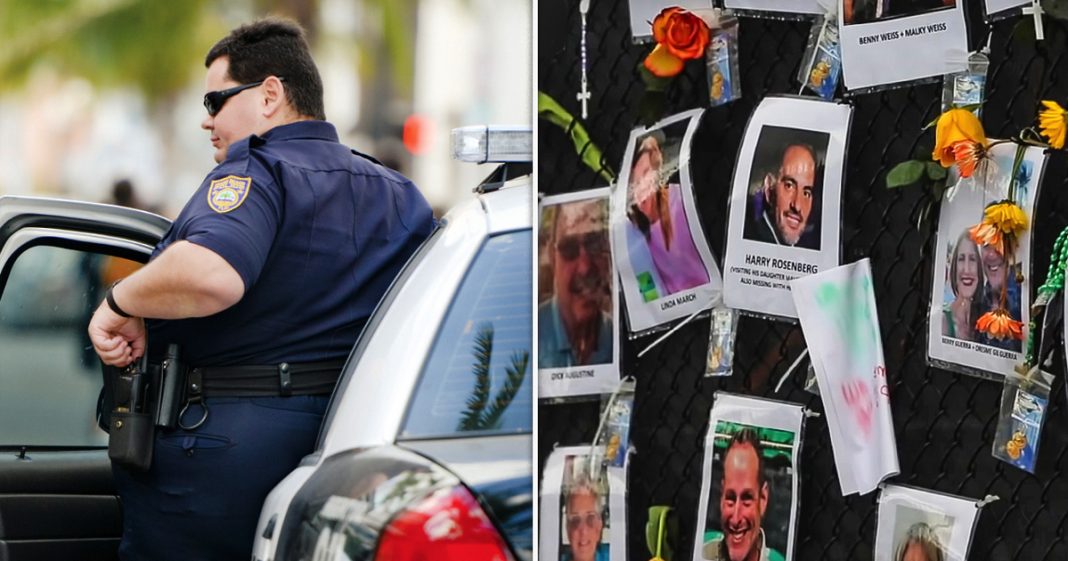 Via America’s Lawyer: Police in one Florida county are trying to prevent crimes before they happen by using an algorithm to determine which citizens to spy on. Mike Papantonio and Farron Cousins discuss more. Also, new filings show there is not enough to go around when it comes to compensating those who lost everything in the Surfside condo collapse. Attorney Rachael Gilmer who is working this case joins Mike Papantonio to explain the Justice Department’s history of keeping tabs on members of the U.S. media, plus a list exceptions to the new rule.

Click here to learn more about what happened and getting compensation for Florida’s Surfside condo collapse.

Mike Papantonio:             Police in one Florida county are trying to prevent crimes before they happen by using an algorithm to determine which citizens to spy on. You know, I read this and I, I had to read it a couple of times. This is craziest stories ever seen, you know. So, so they’re saying we’re here to help you. That’s their first words. We’re here to help you. We’re here to improve your life and we’re going to make life better for you. Tell the viewers what they’re doing here?

Farron Cousins:                  Congratulations, you’ve been selected they say in the letter, and you’ve been selected by the Pasco county Sheriff’s office for increased and basically around the clock surveillance. And they say, this is because, you know, maybe you have a criminal history. Maybe your grades in school were a little questionable. Maybe you’re in a neighborhood that we don’t like. But whatever it is, they’re sending these letters, I think to well over a thousand individuals at this point, letting them know that we’re watching you, we’re watching you. We’re going to make surprise visits to your home without a warrant. And this is all for your protection, citizen. And if you go two years without breaking the law, maybe we’ll stop checking up on you.

Mike Papantonio:             Welcome to our club. We looked at your social media. We don’t like some of the stuff you’re putting in there. We looked at how you grew up. Did you have any kind of problems in the past growing up? We don’t like that. We’ve looked if you’ve ever been even charged, much less convicted. We look at your history of drugs and history of violence. You know, look, first of all, the problem with this is the problem is if you’re out there saying, can they do this? The answer is yes. They’re, they can do this and because of what we call police powers, health, safety and welfare. It’s the same reason that we can tell a person when you come out of prison, it’s not over. We’re going to follow you with parole. So it’s the same analysis only these people sometimes have been convicted, but they’re in this special club where we’re coming to your house, see how you’re doing. We’re going to make your life better.

Farron Cousins:                  Right. And what ends up happening, again, they say they’ll drop people from the program if they’ve gone two years, basically being clean, no charges. But they’ll show up at their house and say, listen, we have to give you a citation because your grass is too long. We have to give you a citation because your music’s too loud. Your car’s parked in the street for five hours or more. It’s all kinds of petty, little, you know, citations. But any one of those citations allows these police officers to just, I guess, add another two years onto the, the surveillance system.

Mike Papantonio:             Well, what’s interesting is there’s, there’s no real set rules here. Okay. Is it demographics? Possibly. Is it your social media? Have you said some really crazy things on social media? Were you in trouble one time, but you weren’t convicted? It’s this it’s, it’s kind of really uncertain on how, there’s a thousand club members right now.

Mike Papantonio:             1000 are welcome to the club right now. And as I look at this story, I mean, I’d like to say, yeah, this could be tested and, and I guess in some sense it’s justifiable. I don’t know. But under, under constitutional law, I can promise you, it’s going to sweep through.

Farron Cousins:                  Well, well, and a lot of the issue too comes down to the criteria, which we don’t even know all the criteria yet. That’s what might be challenged. But yeah, it’s terrifying that they can do this.

Mike Papantonio:             New filings show there’s not enough to go around when it comes to compensating those people who’ve lost everything in the Surfside condo collapse. I want to welcome attorney Rachael Gilmer who’s following this case, as a matter of fact, working on this, trying to help these people. What did the defendants know, Rachel? What did they know when this collapse took place? If we’re to go back and look at the book, what is it?

Mike Papantonio:             Well, what I’m wondering is it, it didn’t shout out and say, hey, the buildings are going to collapse, but it talked about the fact that we have structural problems. We have rebar that’s failing. We have concrete that’s failing. What, what would those things be?

Rachael Gilmer:                 Well, and those are things that were visible to the naked eye. I mean, it wasn’t even information or damage that a lay person couldn’t see. It was very obvious that there were problems with this building. I mean, there’s reports that a guy who was coming to look at doing a bid for repairs to the pool deck just days before the collapse, called back to his boss and said, this building has major issues that we can’t even do the repair work. This has got a guy who’s just coming to do a bid and not necessarily even an expert. So there’s some things that were so obvious and yet no action had been taken.

Mike Papantonio:             How did local government do with this? I mean, surely, I mean, I understand there’s something where they had to, they do a recertification, a re-inspection every 40 years, but in between, there are people that show up and they’re supposed to look at it and they’re supposed to say, you got this problem and that problem. Didn’t, didn’t a government inspector just look at this place and say, everything’s good to go?

Rachael Gilmer:                 So we know that the inspector, the government inspector received a copy of the 2018 report by the engineering firm that said there were major structural damages and, and said, you’re still good to go. There’s allegations that the condo association said, we’ve got a plan in place to repair these damages. But when that still hadn’t happened, three years later, there was no one from the government saying, what’s going on? Why the delays, why has nothing been done yet? It was just kind of forgotten.

Mike Papantonio:             Well, do you think it’s a, do you think it’s a broad problem with these, these condos are all up and down that, that same area, I mean, they’re all built around the same time, a lot of built with the same builder, same kind of materials, same subcontractors. What is your, that, isn’t that one of the big problems we gotta be looking at?

Rachael Gilmer:                 I think it is absolutely. You know, and it’s, I read some reports that said there may not be one specific cause, but kind of a multitude of things that built up over time that then ultimately led to the structural collapse. So how many other buildings in that area have many of these other problems that are slowly building, and they’re just waiting for that final straw that causes their building to collapse, who knows.

Mike Papantonio:             It’s not likely that these people are going to be compensated as, I mean, you know, you’ve, it’s not only the lost the family members, loss of life, injury of all kinds. It is this is where these people lived. I mean, these were their condos, they were expensive condos. Most of them don’t have any insurance to cover that, do they? What, what is the financial layout on this?

Rachael Gilmer:                 You know, there’s estimates that the damages in this case are upwards of $1 billion and yet the available insurance, you know, is less than $200 million. So you hear millions of dollars in insurance available and that sounds like a lot until you total up, you know, the 136 homes that have been destroyed. You have 98 people who have died. That’s loss of earnings, it’s pain and suffering to their family members. The damages in this case are astronomical and the coverage available in comparison is very small.

Mike Papantonio:             Something, something I love that the judge is doing here. He’s saying to lawyers that are signing these cases up, look, you can, you know, we need your help, but don’t expect to get paid here, which is what a judge should do. The other thing the judge is doing is saying, we’re, this is going to be on a fast track. We got people have no place to live. They’ve lost everything. We need a fast track. We need to figure out how to allocate this money. That’s the big issue because you have a limited amount of money. So the allocation is the big issue, isn’t it?

Rachael Gilmer:                 It is. And I think when lawyers get involved and you see big fee awards, it’s because the lawyers had to do real lawyering to prove what happened to prove who’s at fault, or to get the insurance companies to turn over the money.

Rachael Gilmer:                 In this situation, the insurance companies volunteered to turn the money over.

Mike Papantonio:             Yeah, exactly. Well I hope this judge keeps pounding on them. Thank you for joining me, Rachael. Okay.