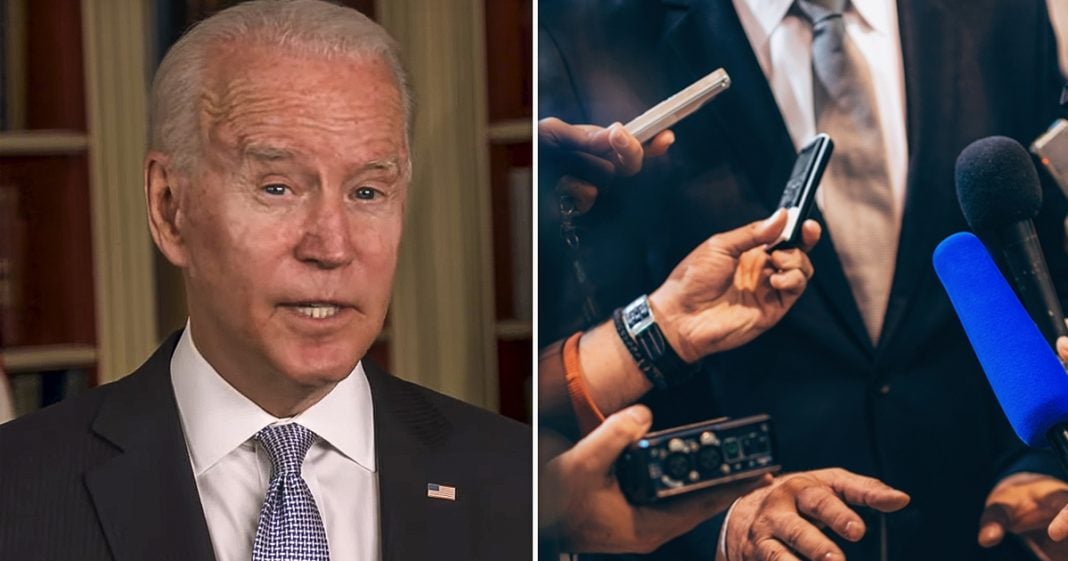 Mike Papantonio:             The Biden administration is trying to argue in court that we can trust their decision to send arms to the United Arab Emirates. How many times must we pound on this table and say they are not our frigging friends? Stop it.

Farron Cousins:                  You know, this, this is getting ridiculous. And of course the Biden administration has been sued by citizens here in the US saying, stop this ridiculous arms deal, this $23 billion arms sale to UAE, don’t do it. They’ve been using the weapons we’re sending them to kill people all over the Middle East, specifically in Libya. And then of course, as you’re about to say here, killing United States soldiers, killing US contractors. They’re killing our own citizens with these weapons we’re selling them. But the DOJ goes to court and says, now hold up, you can’t predict that they’re going to kill us or kill Libyans or kill Yemen’s with these weapons. So you really don’t have a case.

Mike Papantonio:             Yeah. Let’s, let’s call some balls and strikes. Remember when Trump was going to give them all this, it’s the same stuff.

Mike Papantonio:             Oh, Trump, you idiot. Don’t give this to these, to these freaks because they’re going to give it to terrorists. Now, as you know, we’re handling that case. We’re handling many, many cases where we’re finding these weapons that went to Saudi Arabia, or went to some of these folks that we sell them to, end up in the terrorists hands. It doesn’t happen by accident. So we know that’s going on. And so, but, but nevertheless, we have Biden, now Biden’s argument. This is crazy. This is crazy. Biden’s argument says this. Yeah, we’re doing the same thing Trump did, but we think we’re better suited to talk them out of doing bad. That’s their argument, isn’t it?

Farron Cousins:                  It is, you know, we, we can convince them not to go around and kill everybody and give these weapons to enemies of the United States or enemies of anyone. And no, you cannot do that. This is big business for these countries over there, because they’re not just getting $23 billion worth of weapons and then using them. They resell them.

Farron Cousins:                  Some of it conveniently disappears off into the black market and that’s some of the things we’ve sat here and done stories on that in the past. This is not, we know this is happening. And so that’s what it is. They, these countries in a lot of cases become the middlemen. You know, they’re not buying these to keep them, they’re buying them because they can sell them to people that we can’t sell them to.

Mike Papantonio:             Oh, by the way, it happens to be in the top three givers to the Biden administration’s efforts to get elected. Thank you for joining me, Farron.

Mike Papantonio:             Attorney general Merrick Garland has set new limits for when the Department of Justice can seize reporters records and leak investigations. Brigida Santos joins me now to talk about it, you know, on it’s face Brigida, it sounds like a complete victory for journalism. I don’t know that it is. What are the new rules say? Give me a sense of what they say.

Brigida Santos:                   Under the new rules, when trying to uncover confidential sources, the DOJ is now prohibited from seizing information from people in the news media who are acting within the scope of their news gathering activities. Now, of course, there are exceptions to the new rules and there are many. Now the DOJ can still seize a reporter’s records if the reporter is suspected of working for agents of a foreign power or terrorist organization, if they’re under investigation for unrelated activities, or if they obtained their information illegally. Exceptions may also apply of seizing a reporter’s records is necessary to prevent imminent risk of death or serious bodily harm. And there are a couple other caveats as well.

Mike Papantonio:             Well, you know, having gone to journalism school, University of Florida and studied the same kind of guidelines, maybe, you know, long time ago, decades ago, this is in a sense it’s fairly illusory. I mean, if you really think about it, there’s all kinds of ways to get in there. I mean, if you’re working for a foreign country and you’re a journalist for country of China and they say, well, he’s working for China, he’s reporting for China. Let’s take a look. Even though there may not be anything wrong. So I’m wondering how, how our press freedom groups and journalists reacting to this news? Is it like we’ve won because if, if that’s it, they’re wrong.

Brigida Santos:                   Press freedom groups support the new regulations. Now in a statement, the executive director of the reporters committee for freedom of the press says, quote, the attorney general has taken a necessary and momentous step to protect press freedom at a critical time. This historic new policy will ensure that journalists can inform the public without fear of federal government intrusion into their relationships with confidential sources. But journalists, James Risen of the Intercept who has personally been targeted in the US government’s crackdown on journalists and whistleblowers says, not so fast. He points to similar rule revisions in the past and how loopholes continued to allow the DOJ to spy on journalists. Risen says it’s simply too early to sing the praises of Garland’s new rules because federal prosecutors are capable of finding new ways to undercut press freedoms, as you just mentioned.

Mike Papantonio:             Yeah, I totally agree with that. This is a feel good kind of move. I mean, you know, Merrick Garland does something. This is totally feel good. There’s no way that you can look at those rules and say, we can’t squeeze in there somewhere. They’re going to do it. And there, you know what, there’s nobody that’s even going to ask them to, how, how, how did you responsibly do that? There’s nobody to answer. And so, you know, it, it’s just completely illusory. How has the DOJ previously targeted journalists? I mean, what, what’s the difference?

Brigida Santos:                   Garland’s new guidelines come in response to the DOJ’s collection of email and phone records of at least five reporters under the Trump administration. But this isn’t a new practice. Back in 2013, the DOJ also secretly seized phone records of Associated Press editors and reporters under the Obama administration. Then attorney general, Eric Holder also responded by revising previous rules for handling leak investigations. So history is essentially repeating itself and the verdict is out on whether the latest rules are going to be any better at protecting the free press.

Mike Papantonio:             Yeah. I remember the Eric Holder announcement like he had really accomplished something. Like, we really opened it up for journalists nowadays. It was ridiculous. As you pointed out, after that, we had five or six journalists that were targeted by the Holder administration. So this doesn’t mean anything. I hate to see the, I hate to see the media all jazzed up like this like this is some big victory. We’ll follow it as it goes on this year and we’ll see how many victories the journalists really have in this new, this new proclamation by Merrick Garland. Thank you for joining me. Okay.