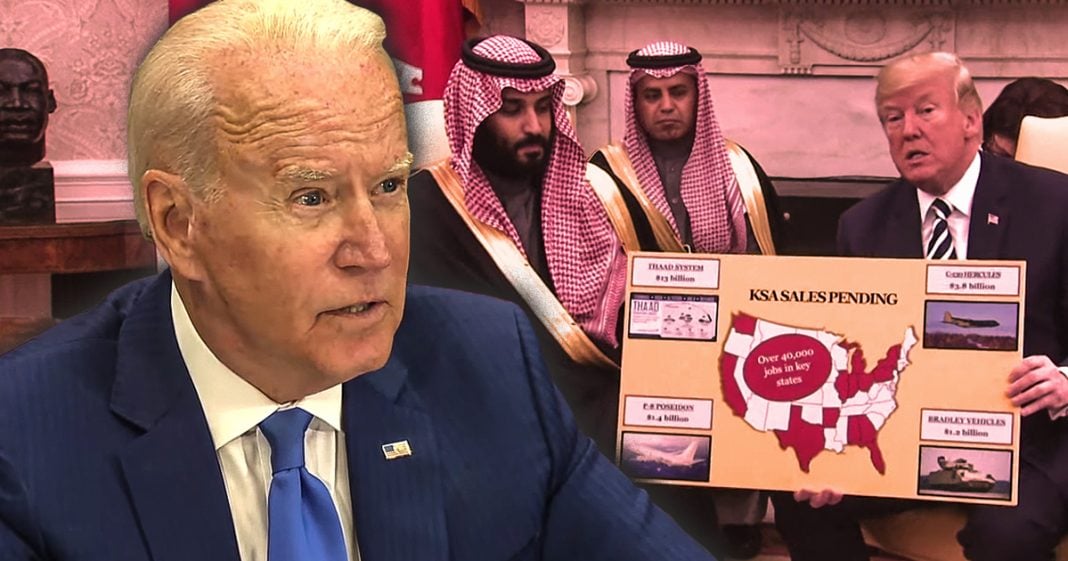 Via America’s Lawyer: Biden’s administration is holding firm on arms deals with the United Arab Emirates, despite the country’s long track record of assisting Saudi Arabia in its brutal campaign against Yemen. Mike Papantonio and Farron Cousins discuss more.

Mike Papantonio:             The Biden administration is trying to argue in court that we can trust their decision to send arms to the United Arab Emirates. How many times must we pound on this table and say they are not our frigging friends? Stop it.

Farron Cousins:                  You know, this, this is getting ridiculous. And of course the Biden administration has been sued by citizens here in the US saying, stop this ridiculous arms deal, this $23 billion arms sale to UAE, don’t do it. They’ve been using the weapons we’re sending them to kill people all over the Middle East, specifically in Libya. And then of course, as you’re about to say here, killing United States soldiers, killing US contractors. They’re killing our own citizens with these weapons we’re selling them. But the DOJ goes to court and says, now hold up, you can’t predict that they’re going to kill us or kill Libyans or kill Yemen’s with these weapons. So you really don’t have a case.

Mike Papantonio:             Yeah. Let’s, let’s call some balls and strikes. Remember when Trump was going to give them all this, it’s the same stuff.

Mike Papantonio:             Oh, Trump, you idiot. Don’t give this to these, to these freaks because they’re going to give it to terrorists. Now, as you know, we’re handling that case. We’re handling many, many cases where we’re finding these weapons that went to Saudi Arabia, or went to some of these folks that we sell them to, end up in the terrorists hands. It doesn’t happen by accident. So we know that’s going on. And so, but, but nevertheless, we have Biden, now Biden’s argument. This is crazy. This is crazy. Biden’s argument says this. Yeah, we’re doing the same thing Trump did, but we think we’re better suited to talk them out of doing bad. That’s their argument, isn’t it?

Farron Cousins:                  It is, you know, we, we can convince them not to go around and kill everybody and give these weapons to enemies of the United States or enemies of anyone. And no, you cannot do that. This is big business for these countries over there, because they’re not just getting $23 billion worth of weapons and then using them. They resell them.

Farron Cousins:                  Some of it conveniently disappears off into the black market and that’s some of the things we’ve sat here and done stories on that in the past. This is not, we know this is happening. And so that’s what it is. They, these countries in a lot of cases become the middlemen. You know, they’re not buying these to keep them, they’re buying them because they can sell them to people that we can’t sell them to.

Mike Papantonio:             Oh, by the way, it happens to be in the top three givers to the Biden administration’s efforts to get elected. Thank you for joining me, Farron.