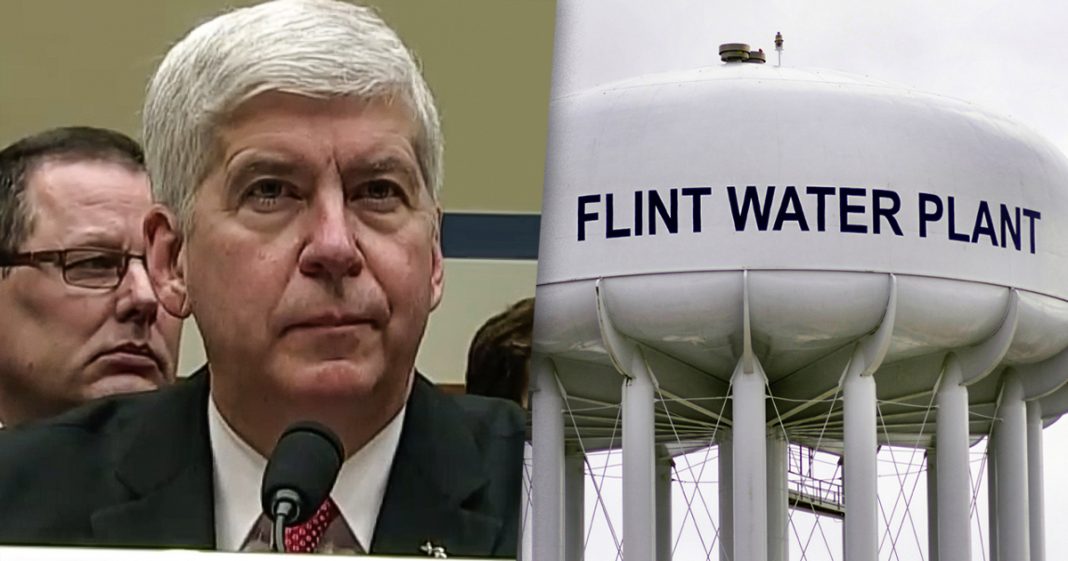 Via America’s Lawyer: The city of Flint made national headlines in 2015 after dozens of Michigan residents were sickened and even killed by dangerous amounts of lead in their drinking water. Since then, multiple investigations have pointed to a massive cover-up within former governor Rick Snyder’s administration. Mike Papantonio is joined by investigative journalist Jordan Chariton to discuss how official phone records dating back to 2015 all mysteriously vanished.

Mike Papantonio:             The city of Flint made national headlines back in 2015, after dozens of Michigan residents were sickened and even killed by dangerous amounts of lead in their drinking water. Since then multiple investigations have pointed to massive cover-up within the former governor Rick Snyder administration. I have investigative journalist, Jordan Chariton with me to talk about this. Jordan, first of all, let me begin by telling you, you have done a remarkable job covering this story when corporate media has as paid no attention. I mean, it’s almost as if corporate media has an attention span of a, of a fruit fly. And I just want to tell you, this is great coverage. Your report in the Intercept explains how hard it’s been for investigators to get a hold of phone records relating to the Flint water crisis. What’s going on with all this missing evidence? It looks really, really bad.

Jordan Chariton:               Yeah. So, essentially there’s been two investigations. One was the original, starting in 2016, that was under a Republican attorney general, and that investigation and those prosecutors discovered governor Snyder his top officials, including his press secretary, their phones were erased shortly before the launch of the Flint criminal investigation. Those prosecutors also learned that top officials in the health department, obviously a health crisis, so kind of important, their phones mysteriously had no messages on them for all of 2014 through October, 2015, which was the full period Flint used the Flint river for its water. They also were tipped off that the officials with the state environmental department, allegedly dumped their phones to the state IT department and those phones came to IT wiped clean, was the quote.

Mike Papantonio:             Yeah. So we expected more from Dana, Dana Nessel. I mean, you know, we, matter of fact, I came on the show when she was announcing like this, they were going to really do something about it. Well, they did nothing. I mean, they, they dropped the ball knowing that as you report this doctor, Dr. Wells, Dr. Eden Wells, that is this, this is their job. Okay. They, they, they phone records just disappear. They’ve been wiped clean, even though they have a retention requirement of at least one year after, you know, and, and indefinite, if there’s an investigation going on. It’s very clear somebody wiped the phone, isn’t it? What explanation do they give for these texts phone logs being, just vanishing?

Jordan Chariton:               You know, as a journalist, you usually get spin from government and corporations. In this case, it was silence of the lambs. The health department literally said we don’t care to comment when asked about, do you have an explanation for, you know, a year and a half’s worth of messages mysteriously being empty. The environmental department currently under governor Whitmer basically pointed fingers at the previous administration saying, we, we can’t speculate about what they did or their motivations. The governor’s legal team has refused to answer. So nothing is being disputed in this story, you know, I think, you know, the, the mainstream media pretends you’re all supposed to be neutral robots as journalists. I very confidently say, this is the biggest government cover up this century from the governor’s office, health department.

Jordan Chariton:               The environmental department. It’s crazy. And frankly, the current attorney general Dana Nessel, she wiped clean, she fired the previous investigation saying, we’re going to redo this thing and start from scratch and bring justice to Flint. They charged the governor with a misdemeanor, when there’s a lot of evidence from our reporting, he knew about a lot of these things.

Mike Papantonio:             She ran, my memory is she ran under the idea we’re going to play, you know, we’re going to clean up this political cess pool. She’s now part of that political cesspool. And you have to ask, how far does the chain, where does this go, how far up the chain of command does this go? Where we know that they switched the water supply directly into Flint river. People were coming down with Legionella disease, dying left and right. Pediatricians were saying, we’re seeing a trend here, children with, with being affected by lead somehow. And all this is just covered up. How, how far does this go up in the chain of command?

Jordan Chariton:               Well, our previous story in January, showed that the governor, prosecutors had obtained the governor’s phone calls with his chief of staff and health director in October, 2014. Over two days, they spoke 22 times. And why that’s important, this was the exact time that the health department and the environmental department were scrambling about the increase in Legionnaires’ cases, happened to be two weeks before Snyder’s reelection. So the prosecutors concluded that was Snyder and his top officials trying to stop the news of the waterborne bacteria that was killing people from going public before his reelection. Snyder testified to Congress he did not know about Legionnaires until a year and a half later. I can’t even get Congress now democratically controlled to respond, whether they will be bringing him back in. I think perjury is still a crime in front of Congress. It goes all the way up. There’s also another element real quick, the, the Flint water crisis underneath it was a financial fraud. It was a privatization scheme to build a new pipeline, take control away from Detroit’s water system and make it regional. And the financial fraud behind this, attorney general Nessel dropped charges that the previous investigation had charged against top officials for bond fraud. Those charges were mysteriously dropped and not brought back. So it stinks from the governor’s office to the current attorney general’s office.

Mike Papantonio:             Okay. So the point being, we, we, you know, on this program, we all always talk about how ridiculous tribal politics are. I’m Democrat, therefore, I have to be all Democrat. I’m Republican because I have to all Republican. Here, it’s both parties, baby. I mean, both of them are part of an ugly cesspool political process where children have been injured for the rest of their lives. People have died because of the decisions that these politicians made. There was one part of it that really intrigued me. They knew for 16 months that there was something going on with the water supply after they switched and had, had a new source, they knew for 16 months, that Legionella was killing people and they didn’t tell anybody. Did I get that right?

Jordan Chariton:               Absolutely. And, and by the way, the governor’s health department and environmental department knew about it right before his reelection and governor Snyder at that time, you know, in a, in a galaxy far, far away before Trump ran for president, he was angling for president, but he had to get reelected as governor first. So, it’s very clear from our reporting that he knew about a deadly waterborne outbreak that was killing people and not, he didn’t willfully, you know, the charges against him were for willful neglect of duty. It was the opposite. He wasn’t neglecting his duty. He was acting along with his top officials to stop it from going public. People died. The previous investigation, our reporting and other reporters have backed this up. The original investigation was gunning for involuntary manslaughter against the governor. This one so far has charged with a misdemeanor. It’s the, you know, water is if it’s healthy is clear. It’s not red or blue. It shouldn’t be about politics.

Mike Papantonio:             We’re out of time, Jordan. But I want to end by saying this. You should get an award by this for doing this story for following it. But in the real world of corporate journalism, unless you’re talking about what Kim Kardashian wore to the latest celebrity event, it’s not journalism. So I hate that that’s where we are with corporate media nowadays, but that is where we are. This is great reporting. Thank you for doing it. Okay.