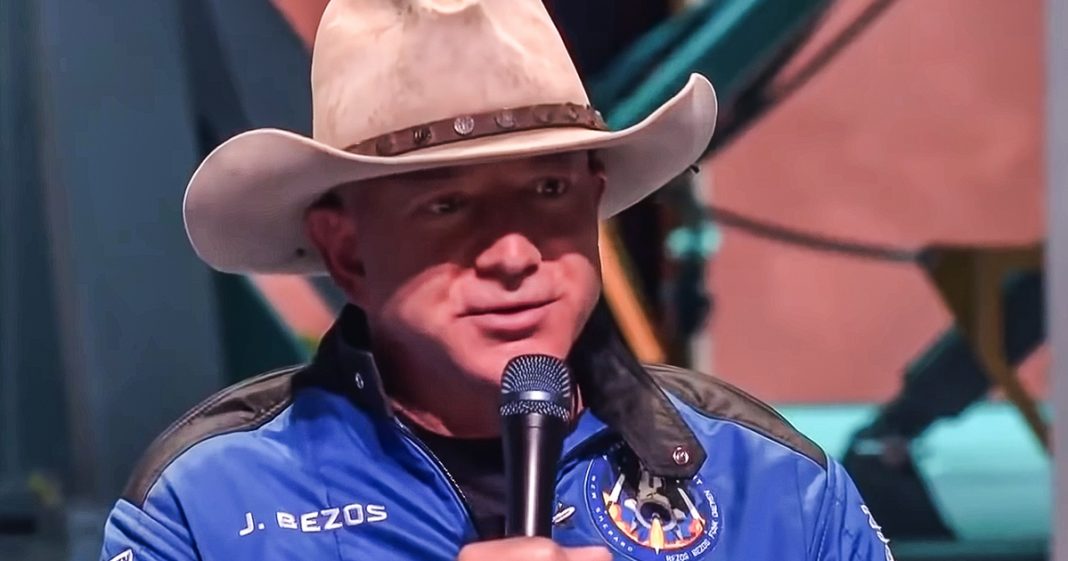 Via America’s Lawyer: Amazon CEO Jeff Bezos thanked employees for making his voyage to space possible. But the billionaire space cowboy made no mention of the billions in foregone taxes that helped fund his 10-minute mission to outer space. Mike Papantonio and Farron Cousins discuss more.

Mike Papantonio:             Jeff Bezos made a 10 minute trip to space last week and when he arrived back on earth, he thanked both Amazon workers and shoppers for making all that happen. He was correct, but not in a good way. I have honestly, one of the best progressive talkers in the business, Farron Cousins with me. How long have we worked together, how many years, 20?

Farron Cousins:                  I think it’s interesting because you know, again, Bezos did thank the, the workers and the shoppers, but really what he should be thanking is, is the officials in DC that let him not pay taxes for all these years that are, you know, the politicians that are keeping wages low so he can pay people, you know, pennies on the dollar for what they’re actually worth. That’s what funded everything we saw last week. And so I’m not, I’m not happy. I’m not impressed. I am curious to know, you know, is there any way to really justify what he’s doing here? So, so what do you think?

Mike Papantonio:             Well, great art, great article in Truthout. I love, I wish they had told me who the writer is, it’s a brilliant article. And he analyzed it in a way that’s a little bit cynical, but that’s okay. You know, I can’t make out the head, the cowboy hat and the penis rocket, it’s all, it’s, it’s fertile ground for saying, take a look here. But I want to tell you something. I, I thought about this. I’m so offended by the whole idea that this is a guy who makes in one second, one second, what the average American worker makes in a week. And I mean, if you follow this out in one minute, he makes more than the average American worker makes in a year. So is it just a total disconnect when he comes back and says you made all this happen? I don’t know whether he just doesn’t get it or what, but the projection of all this is absurd, isn’t it?

Farron Cousins:                  He came back to earth and he said, listen, you know, we have to protect this planet and that’s good. If he had come back and basically ended his revelations there would have been phenomenal. But then he says, so we need to move all polluting industries into space. So the man finally makes his first trip to space for 10 minutes, comes back and says, let’s pollute it.

Farron Cousins:                  When you can’t pollute the atmosphere around the planet while trying to protect the planet. So he almost, I feel like he almost had that revelation, but didn’t quite get there.

Mike Papantonio:             Yeah, needs a better handler. Howard Hughes, let me, let me, let me help this guy. Let me help him just a little bit. Okay. Howard Hughes, when he did that grey goose, that big aircraft that, you know, it was bigger than life and he kept it, I think he kept it in the air for maybe three to five minutes and he was hugely criticized for that. But the truth is out of there came a, I mean, he, he moved the whole industry way ahead. The whole aeronautical industry, he moved ahead with that type of thing. Let me help him on this. I’m not a fan of Bezos, you know, but, you know, we gotta do, we gotta, we gotta tell the whole story on this show.