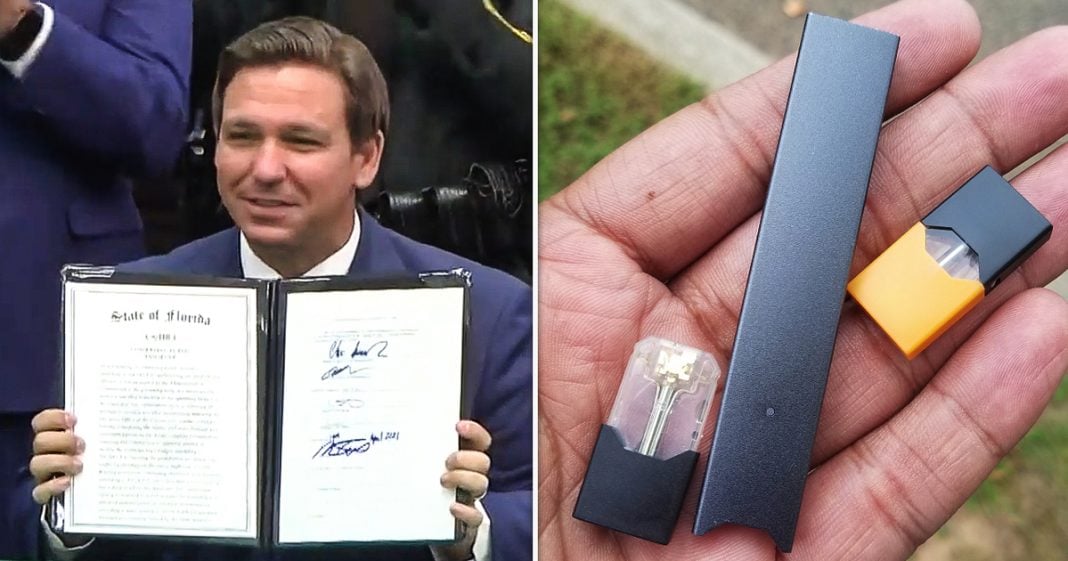 Via America’s Lawyer: Anti-Cuba protestors swarmed the streets in Florida, despite the state’s recent passage of the country’s most stringent anti-protest bill. RT correspondent Brigida Santos joins Mike Papantonio to explain how dozens of states are considering enacting similar laws. Also, Juul paid over $50,000 to sponsor pro-vaping articles in a special edition of the American Journal of Health Behavior. Mike Papantonio and Farron Cousins discuss more.

Mike Papantonio:             Juul has been busted creating articles that say that vaping is totally safe and then paying a medical journal to run these articles that are a fraud. Joining me to help answer the question of why that happened is Farron Cousins from the trial lawyer magazine. Wow, this is, this is the same program that we went through. As you know, you were with our law firm when we initiated the initial tobacco litigation all over the country, it started right here and we, we, you know, we reviewed all the documents, the game plan. It’s exactly the same game plan. What’s your take?

Farron Cousins:                  It, it really is. And it gets frustrating when people don’t understand, not only that, that it’s the same game plan, but it’s really the same players. You know, Altria, which used to be Philip Morris, owns a good percentage of Juul. It is literally the same companies. So what they’ve done here, it’s the American Journal of Health Behavior, their May in June issue. They said, you know what, we’re going to run 11 research articles here. It’s going to be a special on vaping here in the United States. And they didn’t disclose to their own scientists, the people working there that, oh, by the way, all of these articles were actually produced by Juul and they’re paying us $50,000 or so to run this as if they were actual medically reviewed articles.

Mike Papantonio:             Yeah. There’s two steps to it. First of all, they find biostitutes that will say anything. Will write anything for the right amount of money to create an article that says, yeah, there’s no health problems with Juul. Make sure your kids smoke Juul, get them to smoke the candy flavor. That’ll really be great. And then you find a guy like Elbert Glover. You cannot talk about this story without talking about this cat Elbert Glover, who was the editor of this journal, the American Journal of Health Behavior and retired after the article came out. What is your take on this guy and what happened here?

Farron Cousins:                  It is absolutely disgusting. It shows this paper had absolutely no journalistic ethics whatsoever. And again, he only, you know, basically had to resign after the staffers and the scientists that they keep to actually peer review, because keep that in mind too. I’m sorry, that was a part I glossed over there. They had to have their own, you know, science folks, peer review the articles and he said, we’ve got to get this expedited. I need you to peer review this. Not in months, not going over the actual research, but you got like five days, you got a week, a business week to get this peer reviewed. Get it back to me. Maybe there’s some, you know, cash involved here. And, and some of the scientists became so concerned reading this, that they said, my God, Glover.

Mike Papantonio:             You are going to love this, his quote, this is Glover’s quote, I really didn’t think it mattered to tell the people doing the review, that the people that are wanting results are the people who phonied up the, the story, who phonied up the data. Who made it sound like anything that they wanted to, to, to have on paper. And this guy has the audacity to call himself editor of the American Journal of Health Behavior and say, I did the right thing. He knows he didn’t do the right thing. He resigned straight really after that. But he was really only well, he was overwhelmed by the staff, as you say, that said, hey, we’re reading this. You’re talking about 2000 kids that have been hospitalized from this. You’re talking about a whole concept of, a whole constellation of diseases that are directly related. We know that they’re selling this so they can get a teenager hooked on traditional cigarettes.

Farron Cousins:                  Right. And we know all that. We’re finding that out more and more each year. It’s died down over the last year or so with the pandemic, people more focused on that. But Juul was looking at all of these lung illnesses, as you pointed out, developing in teens, over 2000 different cases, all of it happening in teens that were vaping. You cannot claim this is safe. In fact, there’s some scientists out there now saying this is as dangerous as traditional tobacco.