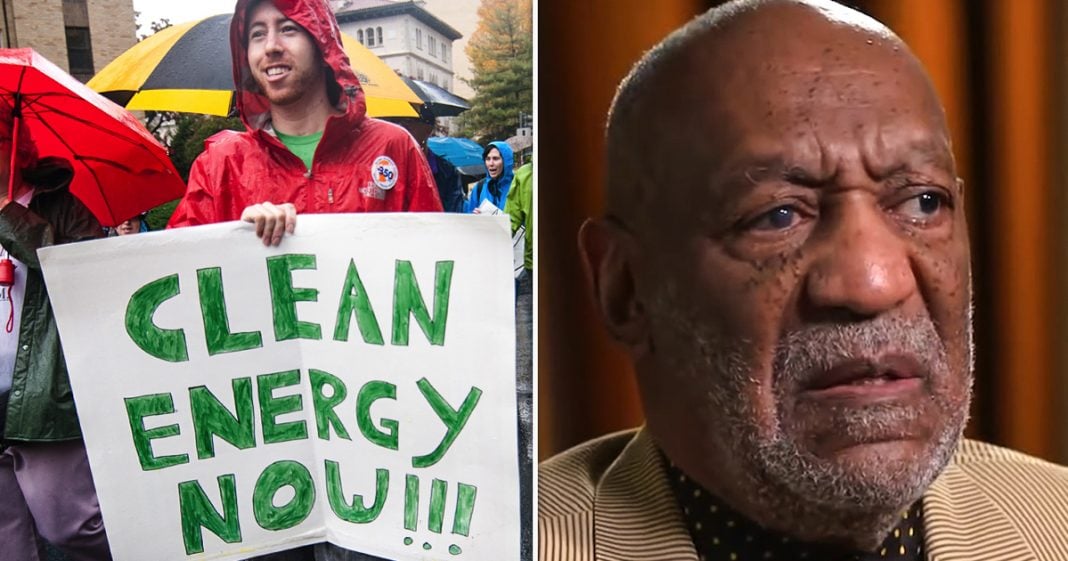 Mike Papantonio:             An undercover video sting caught a top ExxonMobil lobbyist bragging about buying off US senators and fighting, fighting climate change. This is a disgusting story. This lobbyist is in there. He’s giving away all the secrets. A, we, the stuff we say is just BS. We say it because it calms the American public down. They, you know, when they come out and say, we want to help climate change, we say that just to ease the tension. Pick it up from there.

Farron Cousins:                  Yeah. He basically admitted that the company has been engaged, not only in climate denial, but this big greenwashing campaign, you know, telling this undercover Greenpeace operatives that, oh yeah, we always say we want a carbon tax, but we do that because we know it’s never going to pass. Yeah. We say we support the Paris Climate Accords, but that’s because, you know, we really, we can’t do anything about it. We’re going to keep doing business as usual. They’re not, the politicians are not really going to do anything about it. But one of the more disturbing things that, that this man, was it, Keith McCoy.

Farron Cousins:                  Admitted to was the fact that, oh yeah, well, we’ve basically paid off enough people on both sides to make sure that whatever we need to get done, we get it done. We’re the ones who were fighting all the climate change stuff in the infrastructure bill, the corporate income tax increase. We fought that too.

Mike Papantonio:             They admit that they had infiltrated corporate media to the point by just spreading around money. That’s what he was really saying. We give MSNBC money. They don’t cover the story. We give ABC money. They don’t cover the story. All of this came out and, and you know what, I, you know, we have a list of these folks, the senators, call these folks and really thank them for, for, you know, for not doing their job.

Farron Cousins:                  Right. I mean, the Gulf of Mexico was on fire just a couple days ago because a pipeline ruptured beneath the surface and this Exxon lobbyist is sitting there, laughing it up like, oh, we do all these things. You know, another part of the story when he talks about, you know, these other groups we work with, one of those groups and we know, because we covered this 15 years ago, was the American Enterprise Institute that was offering $10,000 to any scientist willing to put their name on a paper, challenging the well-accepted science of climate change.

Mike Papantonio:             Okay. They’re called biostitutes. They find some professor, somebody who’s got credentials, they’re at the end of their career. Would you please write this story? Oh, better yet. We’ll write it for you and we will not put our name on it, but you’ll write it. And then you’ll put it in one of these cover groups. One of these dark cover groups where it doesn’t look like it came from us, but we’re actually paying for it. And this has been going, this is elaborate, elaborate. I love that Greenpeace caught them. Greenpeace did what they needed to do. They knew this guy was a big mouth bragger talking about how talented he is. Talking about how he’s pulled the wool over the American public’s eyes on things like carbon tax. How about that? You know, I thought it was interesting. I don’t know if you caught this, but in the discussion about carbon tax, they said, they said we’re going to support a carbon tax because they actually knew that it would never pass anyway. Right?

Farron Cousins:                  That’s, that’s all part of their greenwashing campaign. So they can say, listen, we’re pushing for action on climate change. We’re pushing for a carbon tax. It’s those darn politicians, by the way, we’re not gonna mention that we’ve been paying all of them off, but it’s those darn politicians that aren’t doing anything about this. We’re just a little old company. We’re doing the best we can. But we’ve known all this has taken place for years. It’s just now public knowledge.

Mike Papantonio:             Bill Cosby made headlines back in 2018 after he was convicted of sexual assault. Three years later, the media is a buzz once more about the comedians conviction that was overturned based on a ridiculous technicality. Legal journalist Mollye Barrows joins me now to talk about it, Mollye, I read it. Let me just tell you something. These judges had to do metaphysical legal gymnastics to get where they got to let this guy go.

Mollye Barrows:                Bad timing. I mean, if they were looking to make headlines to be critical, especially in this post hashtag me too era, they sure made a bad call. But I think a lot of people are thinking the same thing you are Pap and that how did they come to this decision? And in essence, it basically rests on prosecutorial misconduct, if you will, for lack of a better way to put it that this prosecutor who had proceeded the one that actually ended up trying Bill Cosby had announced in a press release, that he was not going to pursue charges against him. And behind the scenes, supposedly the reasoning for that, was that he felt like he couldn’t make criminal charges stick against Bill Cosby after investigating Andrea Costand’s, the professional basketball players charges, that was the one conviction that he had among dozens of other accusations that were similar of being drugged and then sexually assaulted in Bill Cosby’s home. Well, her charges stuck, but the prosecutors said can’t make it stick criminally because we don’t want to charge him criminally and have him plead the fifth. Why don’t you file a civil suit, which she did in 2005. But he, in the meantime, before she filed that he had sent out this press release, basically saying, hey, we can’t charge him. There isn’t enough, there’s insufficient evidence and because of that statement, the Supreme Court said basically there was no official deal, but that implied a deal had been made anyway.

Mike Papantonio:             Yeah. It’s, to get there, they tried to use contract analysis. Gee whiz, when the prosecutor sent out the statement that we don’t have enough criminally to prosecute him, that their client, that the Cosby was able to read that as saying, well, gee whiz, I don’t even have to protect my, I don’t need to, I don’t need to plead the fifth in civil depositions.

Mike Papantonio:             I thought it was okay. I did all of this stuff. And he says, well, if the prosecutor had not sent out that press release, I never would have done it. It’s absurd. It is absolutely absurd. But what kind of message is this to, what’s he got 50 women behind him?

Mollye Barrows:                Which is unbelievable. And basically some legal analysts are saying that this decision essentially keeps them from being able to pursue any other charges on these other cases.

Mollye Barrows:                Exactly, but there are some folks that basically say that’s the case. And then of course you have Andrea who had the one conviction saying how happy she was at the time he’d been convicted. And now she’s disappointed and feel like, feels like this will be discouraging along with other victims rights groups think this will be discouraging of other women to come forward. But like you talked about because he did testify in her civil trial, there were other cases that were brought against him that just basically didn’t go anywhere. But they did use some of the testimony that came out of that. They were saying his rights were violated because of basically he, he admitted to what he had done, but he wouldn’t have done it if he’d known it was gonna be.

Mike Papantonio:             So, so, you know, Hollywood, you know, you know, the entertainment business. Is he going to be doing Fat Albert voices again, making tons of money? What do you see this doing? I mean, A, I think it discourages these other women.

Mike Papantonio:             B, the prosecutors are trying to take a quick way out of it. They can prosecute. That, that, that’s unrelated, at least as you read this opinion and see, you know, you gotta wonder, you know, just businesses as usual with this guy again.

Mollye Barrows:                Well, I know, 83 years old, he’s been serving three years of a 10 year sentence. Physically I don’t know what kind of shape he’s in. Obviously he’s elderly. So from a natural standpoint, how many more years does he have on this earth to continue to do what he has been accused of doing? So in that sense, I guess there’s some justice perhaps for the victims. But as far as being held accountable in a court of law and looking at predominantly men that have made these decisions, Pap, perhaps we need more women in these positions of leadership that can take a fresh look at this, whether it’s positions in the Supreme Court or as prosecutors or leaders in their own areas. We need women’s input and especially victims advocates to say, hey, why wasn’t, why weren’t charges brought against him in 2005? Why was this particular prosecutor, Bruce L. Castor Jr., why did he feel like there wasn’t enough evidence to charge him criminally? Maybe there, I think if people felt like there was a hot white focus, a spotlight, they would be more willing to, to make the right decision.

Mike Papantonio:             There was enough to prosecute him back then. Judge David Hecht.

Mike Papantonio:             Supreme Court, only two people on the Supreme Court said, this is an absurd opinion. It’s embarrassing to us. Please don’t do this. But this guy, David Wecht, writes the opinion. And as you read it, you say, you have got to be kidding.

Mollye Barrows:                Well, what’s so interesting too about the dissenting opinions written by one of the judges that I’d seen, as he said, just because he made the statement, the prosecutor, his predecessor made a statement in that press release, essentially exonerate, saying there wasn’t insufficient evidence. He was saying in that particular case, and at this time, he wasn’t saying this is my decision moving forward on all cases as it relates to this or any other case. So it’s interesting.

Mike Papantonio:             Mollye, keep pressing this story. It’s nauseating to me, absolutely nauseating. Thanks for joining me.