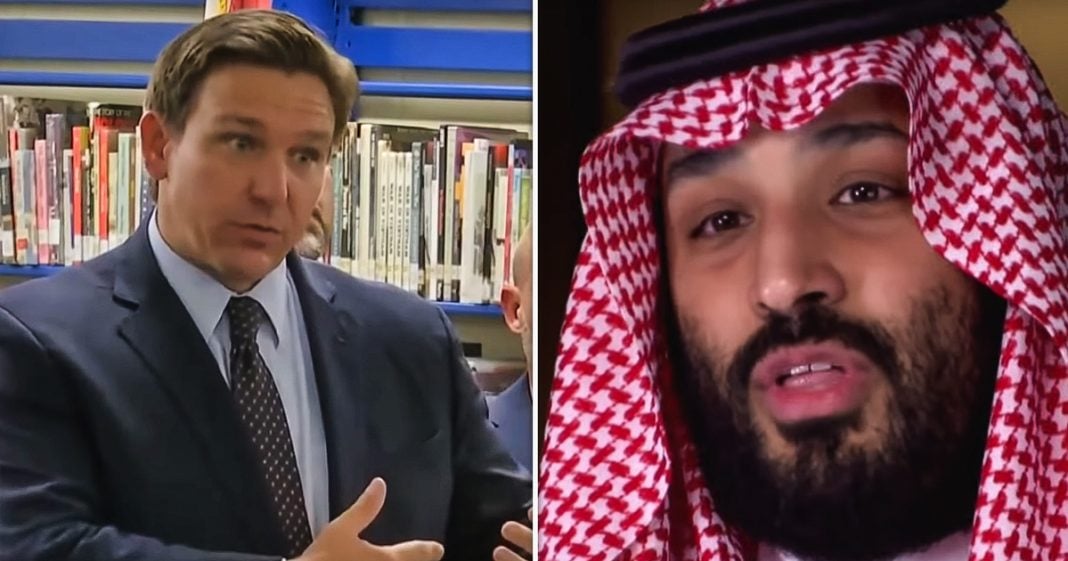 Mike Papantonio:             Florida’s governor Ron DeSantis has signed a law mandating all public college students and faculty to disclose their political views. He claims it’s to fight indoctrination but critics view it as a blatant violation of individual rights. Joining me to talk about this is my friend Farron Cousins from the trial lawyer magazine. Welcome back. You had a short vacation.

Farron Cousins:                  There really is. You know, this is, it’s kind of shocking, you know, obviously we’re down here in Florida and we’ve seen Ron DeSantis kind of go through and, and he pushes a lot of bills, signs a lot of legislation, that is essentially designed to fail. And I think this is another one of those pieces of legislation. He knows this is not going to hold up in court. You can’t mandate that these college students and the professors, and it says all faculty. So we could be talking about, you know, custodial staff has to fill out these, these forms to identify their political views. That, that’s nobody’s business on that college campus.

Mike Papantonio:             Okay. So let, let’s, let’s put this in perspective. This is a Harvard, DeSantis is Harvard educated. This guy is not a dummy. I don’t care. You might not like him.

Mike Papantonio:             But he is not a dummy. So what is this about? He knows there’s first amendment problems. People have a right to express their beliefs. You can’t stifle that. He knows that, that this is the quickest way to, to, to shut down political beliefs by stifling them. And he knows that the lack of clarity in this bill is overwhelming. There’s no way this is going to stand up in court. So why is he doing it?

Farron Cousins:                  He’s doing it because Ron DeSantis wants to run for president in 2024. And this is good red meat for the conservative base. I mean, there’s plenty of organizations out there, conservative organizations, whose sole purpose is to point out, you know, liberal bias in colleges. You know, it’s paper thin arguments that they put out there because most colleges really are fairly even handed. You know, individual political ideology does not play a big role in the classrooms, except for maybe in a few extreme cases. But it’s a culture war issue for Republicans. They eat it up. DeSantis says, listen, I can do this. I can get the publicity of passing this legislation and then by the time the courts strike it down, nobody’s paying attention anymore. They only know that I did it. Not that it didn’t stand.

Mike Papantonio:             Okay. The irony here, Florida is 45th in the United States. You understand, 45th where it comes to education, number 45 out of 50. And, and, you know, he, he knows this and he knows it is, as you point out it’s red meat. He, he’s really going after the critical race theory, isn’t it? That, that’s the bandwagon. Talk, just, just give me a 10,000 foot. Most people don’t even know what it is. What is, I mean, if you ask either side, ask somebody who yeah, I’m for the critical race theory. Really? What is it? Ask somebody who’s against it. I don’t know what it is, but I’m against it. Talk about it just a little.

Farron Cousins:                  Right. You know, essentially this was this theory put forward in the 1970s, I believe it was, they were, been looking at, you know, basically the founding of the country, the way laws are written, the way, you know, regulations work even within private industries. And they did find there is a common thread, essentially, there is this built-in racism. You know, you see it a lot in the banking industry with the red lining, things like that. You see it with the way laws are upheld. You see it in sentencing of different defendants. And that’s all it is, is saying, we have to acknowledge this inherent, you know, racial discrepancy in the way the country works. And by acknowledging it, we can fix it. That’s all it is.

Farron Cousins:                  But I do have to say with, with this DeSantis thing here, he, he recently, outpolled Donald Trump in a straw poll at a conservative convention in Denver this past weekend. So DeSantis’ stock is rising, whatever he’s doing is working.

Mike Papantonio:             A new report has revealed that four of the Saudi nationals were implicated in the Khashoggi murder that actually received their training right here in US soil. Wow. When you dig into this story, no surprise, who do you see, John Brennan. I mean, the warhawk of all warhawks. John Brennan that says he allows these foreign nationals to come in and be trained on American soil. But here they were taught, I suppose, trained to kill people. How do you go about sawing people in half and getting them off the scene? These people went through three training sessions right here in the United States with this Tier 1 organization.

Farron Cousins:                  Yeah, yeah, Tier 1 Group is the group that brought these, you know, Saudi nationals in. They gave them this training, which they say, no, no, no, this is just so they can help protect the Saudi Royal family. We’re, we’re not teaching them how to go and kill reporters. But once again, as we saw right here, down the road from us in Pensacola, we’re allowing these people to come in with very little vetting. You know, we don’t know really who they are. We could know, we’re just not doing the back, you know, the, the, the legwork on that, and we let them come in, they get our training. Our, we are using our military contractors, which is what Tier 1 Group is. They get the money, they train these individuals, the government pays them to do it. We send them off and they commit these unspeakable acts.

Mike Papantonio:             They, they do it for the weapons industry, don’t they? They do it for the military contractors, don’t they? Obama puts this in place. John Brennan, who was in charge of the CIA, put this under the direction of Obama. We need something in place where we can bring in all these Saudis. We can train them to use our, our planes and our guns. We can train them. We can give them every, the key to everything we know in our military, that started with John Brennan, the Obama administration, and that’s where this training took place. And so, so at some point don’t, we have to call it what it is. This is payoff to the military complex. This is payoff to the weapons industry. These guys cut this guy into little bitty pieces with a bone saw for God’s sakes while the Royal prince was watching it take place. Right?

Farron Cousins:                  Yes. And we also know that the state department has to approve each and every one of these individuals that comes over here to the United States. So they’re the ones who are supposed to be doing the work, the federal government is, to find out who these people are, what they’re all about and they’re falling down on the job because they’re choosing to fall down on the job. You know, they’re not doing what they’re supposed to be doing with the vetting process. And that’s why we end up with these individuals getting paid in the US to train these people. Well, same thing again, here in Pensacola, which we’ve talked about that case as well. They send them over here. They use our military for training. They turn around, they buy stuff from our military contractors. Military contractors get more big contracts to sell more. It, it’s, it’s and endless cycle.

Mike Papantonio:             It’s not Democrats or Republican. Started with Obama. Trump then takes it over, puts it on steroids. And this thug, this, this king thug who was, there’s actually indications that he was watching this murder take place via video.