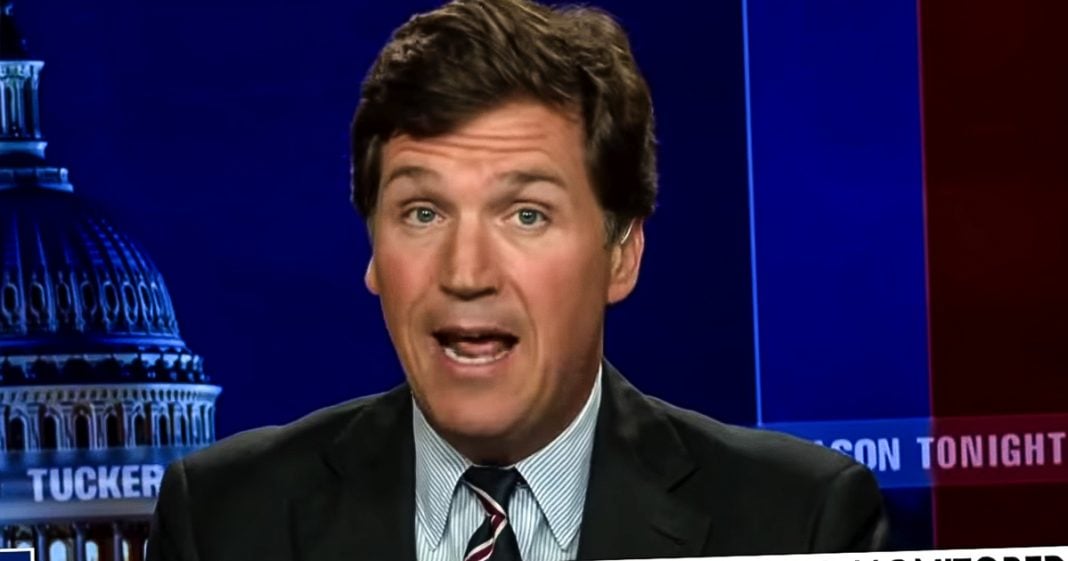 Via America’s Lawyer: Tucker Carlson blasts Biden’s administration and the NSA for allegedly surveilling his program, warning other networks that they’re likely being snooped on too. Mike Papantonio and Farron Cousins discuss more.

Mike Papantonio:             Fox news host Tucker Carlson says that a whistleblower reached out to warn him about the fact that he’s being spied on by the Biden administration.

Tucker Carlson:                  The Biden administration is spying on us. We have confirmed that. This morning we filed a FOIA request, a freedom of information act request, asking for all information that the NSA and other agencies have gathered about this show. We did it mostly as a formality. We’ve also contacted the press office at both NSA and the FBI. We don’t expect to hear much back. That’s the way that usually goes. Only Congress can force transparency on the intelligence agencies and they should do that immediately. Spying on opposition journalists is incompatible with democracy. If they are doing it to us and again, they are definitely doing it to us, they are almost certainly doing it to others.

Mike Papantonio:             Could there be truth to this? Joining me now to answer this question is the very talented, progressive commentator Farron Cousins from the trial lawyer magazine. I got to tell you Farron, I, I have very little problem believing this when I, I’ve seen the history. I remember James Clapper appearing in front of Congress after he lied to Congress and had to admit that he lied to the Congress about spying on, on thousands and thousands of Americans. This is, this is not hard to believe at all.

Farron Cousins:                  Right. I mean, if you understand the history of the NSA, the FBI, CIA, all of these organizations, as you already mentioned, for generations they have been spying on American citizens and they do pay particularly close attention to journalists, activists. You know, we’ve seen it with the oil pipeline activists. We’ve seen it with journalists, recently the CNN reporter that the Trump administration was spying on. Obama, his administration was spying on reporters from the Associated Press. So is it plausible? 100%. This is what our government does routinely. So I think there’s, there’s definitely a possibility it’s real. If it was a different person saying this, I might, you know, be 100%, Tucker, I am skeptical of given his history, but this is something that has happened.

Mike Papantonio:             Well, you know, have we really gotten to the point, Farron, where Democrats and progressives are so frigging tribal, so tribal that they’re in, that they have an inability to analyze the facts in front of them because of the personality involved. I mean, what if this was Jason Mirror? What if this was Lester Holt? What if there’s some people that we watch every night on the news and hope we can believe them. The point is you see, it’s this dumbing down process of politics right now.

Mike Papantonio:             And this scares the hell out of me if you wanna know the truth, because here you got people like James Clapper. I mean, the guy’s a bureaucratic thug. You’ve got John Brennan who we know his history, my God, he’s never seen a war he didn’t want to start. He’s part of the weapons industry. Now he’s working as a commentator for MSNBC because he said everything MSNBC wanted him to say. So, so I got to dig into this. I’m really troubled by this tribal notion, we can’t believe it because it’s this guy.

Farron Cousins:                  Right. And I’m not willing to write off that, you know, that Tucker’s lying completely. He has a history, obviously, of saying things that are not true. His own lawyers had argued in court, you know, no reasonable person is going to take what he says at face value. But again, what does he have to gain from lying about this too? That’s the other side you have to look at, because obviously we don’t have the evidence right now. So does he gain anything from making these claims? I don’t think he does.

Mike Papantonio:             I can’t figure it out. I mean, you, look, Rachel Maddow’s defense in court was you can’t believe what she says. She’s an entertainer. So I, you know, that doesn’t move me. What moves me is when you recall what Howard Zinn, you’ve interviewed, I’ve interviewed Howard Zinn before his death, Chalmers Johnson, we interviewed him together before his death. These are people who wrote the most important things ever written about the dangers of the military complex. And this is all this is. This is an extension of the military complex. John Brennan has always been out there pitching for the military com, James Clapper has. It’s impossible for me to believe, well, we know this don’t we? We know Clapper admitted. They col, he says they collected, they stored and they monitored American communications with no warrant. And he only did that because Snowden caught them. That’s the only reason he did it.

Farron Cousins:                  Yeah. And, and what we have now, too, with this massive surveillance state that we’ve created here in the United States, every time they get caught for it, they come out with the same lines. Oh, well, this only happened, we only surveilled these 16,000 people because there was a typo in the order, or, well, it was written a little too broadly and people who weren’t supposed to be surveilled got surveilled. But again, we’re talking about tens of thousands of people in the last few years alone that get swept up into this. And every time it’s some stupid excuse of, oh, it was typos, broad orders. They weren’t the target. They were just, you know, somebody the target had spoken to. And that’s a good point to mention too, in the NSA’s denial that they’re targ, that they’re spying on Tucker Carlson, they said, no, he is not a target.

Mike Papantonio:             Well, he, he’s part of the sweep. You know, we, he wasn’t a target, but now that we targeted this person, I’m going to talk about this a little longer. We’ll just take a little less time on the next segment. But key, the X key score. I mean, this was a notorious dragnet. We all know. I mean, nobody’s making that up.

Mike Papantonio:             We know about it and this was driven and has been driven by the last three presidential administrations. Okay. There ain’t, you know, there’s no difference. There is no difference. It’s like you and I talked about, they have this exclusive club and you know what, you might think you’re in it, but you ain’t in it. You could be the, you know, the, the loud progressive who’s coming out and saying, well, I know the high ground, you ain’t in this club we’re talking about now. If you think you are, you are in LA LA land. So we got to do more on this story to me, I walk away and I say, how in the world did we let James Clapper go with committing perjury in front of Congress?

Farron Cousins:                  Right. I, if that had been any other person, especially over the last four years, if that had been a member of the Trump administration, the liberals would be calling for his head to roll. But this happened, he testified, I guess it was during the Obama administration, admitted he lied. And, ah, well let’s let him go. But, but this spying operation here is, is very well-developed. It’s been going on for generations here. I mean, a lot of the people you’re mentioning too, they were part of the Clinton administration. And it goes even further than that. You know, you and I have talked about the, the Church committee hearings.

Farron Cousins:                  We’ve. we’ve talked about, you know, Martin Luther King being surveilled, and they wanted him to commit suicide, you know, or else we’re going to make it seem like you had an affair. This is what the government does. I mean, nothing that Tucker Carlson has claimed, you know, we’ll see if the evidence supports it. However, history does support it. History does say the government does these things and everybody just kind of whistles past the graveyard on it. I mean, it’s crazy.

Mike Papantonio:             Yeah. Corporate media won’t deal with it, right? Because they’re, because the arms industry spends so much money with them. You’ve got, you know, you’ve got a legislature that won’t do anything about it. You’ve got people like Tucker Carlson, I don’t have anything in common with his politics, nothing. But he is isolated and to have these dweebs out there that are progressive tribal Democrats not understand how dangerous this is for them. They need to figure out that this administration is not always going to be here. And when it has to do with some progressive being targeted, then maybe they’ll start paying attention.

Farron Cousins:                  Well, you know, and that’s a lot when people say the slippery slope of the media ban or not media, but the social media banning somebody, oh, it’s a slippery slope. It could lead to this, this and this. No, the, the spying one is an even bigger slippery slope. I mean, I know for a fact, I, I’ve had my name and my reporting mentioned in internal interior department emails. A friend of mine who got her hands on a big batch of them. She sent it to me one time and said, just thought, you’d want to know this.