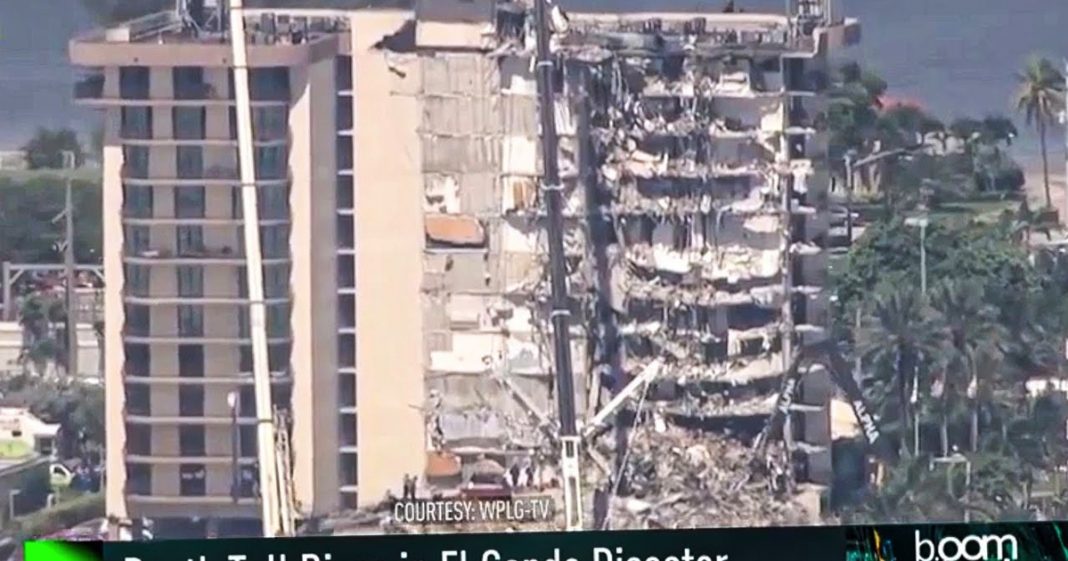 Via Boom Bust: As the death toll continues to climb in the wake of the South Florida apartment building collapse. Attorney Sara Papantonio of Levin Papantonio Rafferty Law Firm brings us up to speed on the lawsuits facing the building’s owners.

Rachel Blevins:                   Joining me now to go further in depth on this is Sara Papantonio, associate attorney at Levin Papantonio Rafferty. Now, Sara, the first lawsuit was filed less than 24 hours after the building collapsed, asking for compensation for all of the victims involved, there are likely to be many others filed, but the biggest accusation here is that the condo association knew that there was significant damage to the building and didn’t address it. Do these victims appear to have enough evidence to prove negligence in this case?

Sara Papantonio:              Yeah, you know, here, it looks like the plaintiffs had everything they need to move forward n this stage. In 2018, you have an engineering company telling this homeowner’s association that there are major structural damages, that there’s abundant cracks in the structure. Then you’ve got an investigator telling the HOA that they’re looking at eight to $9 million in damages. But not only that two years later in 2020, we re-eval, re-estimated those damages and they re-estimated the structural damage should be 12 to $15 million in repairs. So we absolutely have multiple instances where the HOA was notified of these issues, you know, for, for years at this time. And that’s what lawsuits like this come down to. Did the defendants know about the issue before it came a problem? And that’s absolutely clear in this case. So we’ve got enough to move forward on that.

Rachel Blevins:                   Yeah, and it certainly seems like this was almost just hiding in plain sight, that this was something that was talked about, but action just wasn’t taken. Now, I want to touch on that engineering port, report you mentioned, that warned about severe structural damage back in 2018 and that even talked about a possible collapse of the building altogether. But we saw just one month after that a Surfside town inspector met with residents and assured them that the building was in very good shape and that they had nothing to worry about. So is it possible that we could even see criminal charges filed surrounding this collapse?

Sara Papantonio:              You know, in this case, I think anything’s possible, but I don’t think we have enough to file those criminal charges just yet because that’s, in the criminal, in the criminal realm, we’ve got a level of culpability that you have to reach in order to bring those charges. And as it stands right now, I just don’t think we have enough information to raise that. Now, as we start uncovering the documents in this case, that’s when we learn whether or not there was any type of cover-up or if there’s any type of just shadiness involved to this situation. But right now we just don’t know enough to bring those charges.

Rachel Blevins:                   Yeah. And the hope is that eventually everything will come to light. Now, when it comes to cases where damage is identified like this one, how much of a responsibility does say the condo association have to not only notify those residents, but also to pursue repairs in the interest of safety?

Sara Papantonio:              Well, the HOA, the homeowners association has the duty here. They’ve got the duty to maintain the structure of the building, the duty to be aware of problems with the building and then the ultimate duty to fix those problems. So what I think happened here is the HOA pushed off all of these issues for as long as they can. And that’s because Miami requires that all buildings that are 40 years or older, go over what we call an inspection process or a recertification process. So this building was right on the edge of that 40 year mark in 2018 when they got that notice of the structural damage. So I think what we’re going to see is that the HOA was given this $9 million tab of bills for repairs and said, hey, let’s just push it off until we absolutely have to, until that 2021 mark, when we hit that 40 year requirement to do the recertification. So as more and more information comes out as more documents come out, I really think we’re going to see the HOA in this case, just pushing off the repairs for as long as possible in order to save money in the long run.

Rachel Blevins:                   Wow. This truly is a shocking and tragic case all around, but we will continue to follow it. Sara Papantonio, thank you for your time and insight on this one.