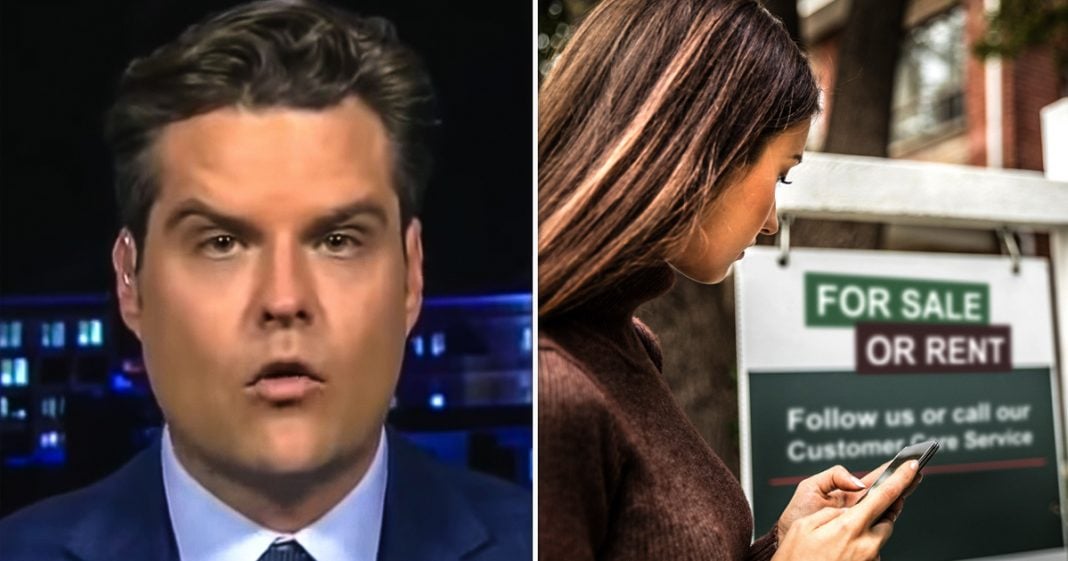 Via America’s Lawyer: Law students who graduated with Matt Gaetz signed onto a letter calling for the congressmen to resign, but they also told us that they aren’t surprised at all about his behavior. Also, private pension funds are gobbling up homes across the country, outbidding home buyers, and then raising prices for consumers. Mike Papantonio and Farron Cousins discuss more.

Mike Papantonio:             Law students who graduated with Matt Gaetz signed onto a letter calling for the congressmen to resign, but they also told us that they aren’t surprised at all about his behavior. You know, I saw this story, I guess you could get anybody, you could go find anybody that’s going to talk bad about you. But this, this is, this is crazy bad. This is look, we don’t want you to be associated with our school here at William & Mary. You’ve got, the, this.

Farron Cousins:                  William & Mary law school tells their students pretty much during orientation, part of our goal is to make citizen lawyers. We want you to go out into the world and we want you to use your talents, at least through part of your career, advocating on behalf of people in order to make the world better, to make the country a better place. Do your civic duty. Essentially, they’re telling them, we need you to go out there and be good ambassadors for the school and be good human beings. And 500 students of William and, William & Mary, have signed onto this letter saying this guy, Matt Gaetz, doesn’t meet these qualifications. He needs to resign from office. He’s an embarrassment to alumni. He’s an embarrassment to the law school. And about three dozen of the people who signed onto this letter were actually in his class. They knew him personally. And most important thing to me is they said, he’s the same guy he ever was. He never grew up. He never changed.

Mike Papantonio:             Well, they, they borrow from Thomas Jefferson’s the Citizen Lawyer. We need to have citizens lawyer out there. Although when you look at the numbers, the numbers are massive from that school who end up going to work for large corporations, that aren’t exactly citizens lawyer.

Mike Papantonio:             They’re silk stocking lawyers that are working, you know, for the biggest corporations in the world. I don’t really call that citizens lawyers. If you look at the percentage of them that actually do, maybe what we do, work, actually go after corporations on behalf of consumers. I don’t think you’re going to find that many citizens lawyers. But, you know, it’s every day where you have the media going after him, where there’s some new edge of a story, but he’s still standing.

Farron Cousins:                  He, he really is. And that’s, you know, kind of the scary part because we’re coming to a point where the stories are slowing down a little bit with Matt Gaetz. We’re certainly not getting many new revelations. But I think what is important is that the media is creating not just a narrative, but they’re really establishing a pattern of behavior with him. And that’s important. You know, if you do want to go after this guy, if you want to have a successful prosecution, eventually, you have to have the pattern of behavior. A couple weeks ago, reporters went and they talked to his former high school classmates. The stories that the college or the law school classmates tell us are almost identical to what we heard from the high school classmates. So we’re establishing that this is the hard partying, you know, hey, maybe there’s strippers here or not.

Farron Cousins:                  You know, and that’s one thing he said in an email, of course they claim he was joking, but this is who this guy is. And it does corroborate some of the other stories we’re hearing about the investigation.

Mike Papantonio:             Yeah. Those stories, I’m going to have a barbecue. Make sure you bring plenty of liquor. Bring, bring $1 bills and oh, by the way, bring some strippers too. But the whole vibe is the frat boy vibe. You know, you get it all the way back to high school. And, you know, that seems to be who the guy is, but he’s still standing. And everybody’s saying it’s going to be tomorrow, this investigation is taking, it ain’t happening yet.

Mike Papantonio:             Private pension funds are gobbling up homes across the country, outbidding home buyers, and then raising prices for consumers. You know why this is such an important story? It, for, for somebody to read this story and say, ah, that doesn’t make a difference. Really? You have corporations, investment bankers, that are buying up complete neighborhoods so they can raise the prices for rent. They can raise the prices for sale and they can flip the houses. What does that do to the average buyer who says, look, you know, we just got married. I want to buy a house. I just graduated from college. I want to buy a house. This is a whole new bubble, isn’t it?

Farron Cousins:                  Right, it is. It’s a, it’s a bubble that’s inflating rapidly and is destined to pop as all bubbles are. And so what we’re seeing is that we’re watching average Americans be priced out of the market by these pension funds, places like BlackRock, snapping up all of these homes. And, and honestly, we had seen a lot of this before in the previous housing bubble, not necessarily with private pension, but these companies started coming around, you know, we flip houses and all those kinds of type of people, changing a house from a $50,000 house to a hundred thousand dollar house. Suddenly, people couldn’t buy it. You end up with a glut in the market, everything comes crashing down. And these pension funds now say, hey, we can do that and we can make a heck of a lot of money in the process. And they can do it because they have the upfront capital.

Mike Papantonio:             Because they’re driving it up artificially and they’re going after foreclosed houses, they’re, what you have is you have about 300, 200 to 300 investment bankers, that are organizations that are doing this. And they know exactly where this is going. You know, they look for a house, they look for houses in good school districts. They look for houses where somebody coming out of college may say, you know, just want to start up. New married couple may, I want to start at home, start up A home. And then they, they buy entire neighborhoods.