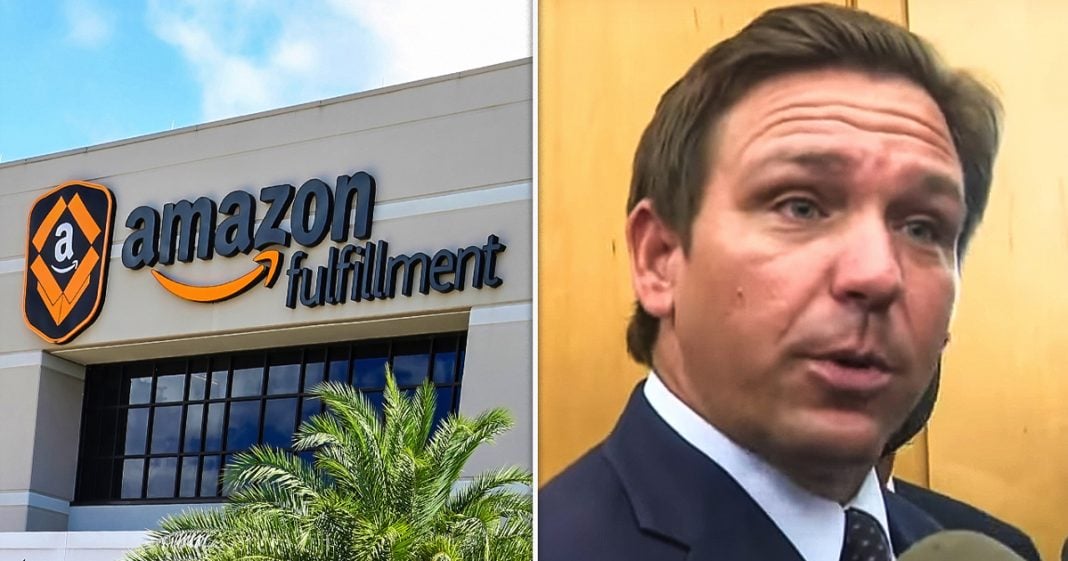 Via America’s Lawyer: Amazon workers are injured on the job 80% more often than the industry average. Mike Papantonio and Farron Cousins discuss more. Plus, Florida becomes the first state to punish social media platforms for banning political candidates. Attorney Stephen Luongo joins Mike Papantonio to discuss how Big Tech may be tasked with regulating content, but lawmakers are tasked with protecting free speech.

Mike Papantonio:             A new report has revealed that Amazon employees are getting injured on the job at a dramatically higher rate than other workers in the industry. Does it ever, do, do the Amazon stories ever stop? You know, that’s, that’s the question. At what point does this cat say, look, I made a lot of money? I’m a trillionaire, basically. I can treat my people okay. I don’t have to have them rushing around. Here’s what happened, these unions, four unions got together and said, we need to look at the statistics. How are other warehouses doing compared to the Amazon warehouse? Dismal, right?

Farron Cousins:                  Absolutely. You’re talking about an almost 80% higher increase in workplace injuries at Amazon than any of the other warehouses working, essentially, in the same industry here. And, you know, to your point, what, when does Jeff Bezos say, I’ve got enough, maybe you guys can slow down. He, he said, yesterday, I’m going outer space.

Farron Cousins:                  Essentially, Bezos has just, I’m leaving the planet at this point. But, but what’s really happening in these warehouses as we have discussed so many times over the years, and we’re going to keep covering it because it is so dismal for these workers. They’re, the, the conditions themselves are horrendous. The injuries they’re suffering are horrendous. You’re talking about thousands of people a month being sent home because the injury they’ve sustained is so bad they physically can’t work anymore. And it’s all happening at Amazon.

Mike Papantonio:             Okay. As I look at this story, 580,000 workers, okay. That they took the numbers, they did a ratio. They said, you have this many numbers, these are your numbers. Here are the serious accidents. The serious accidents is where you got to focus because that could be life. I mean, you know, change your life. You break your back. You, you know, you hurt something that you’re on total disability. There, those numbers, those numbers are skyrocketing.

Farron Cousins:                  They, they really are. And I don’t think people appreciate really how, how much these workers have to do when we we’ve seen the stories of these people who, you know, a lot of times they’re younger individuals and older individuals. They’re, there’s not a lot of in between in most of these warehouses. So you have people that could be 22 years old, picking up these massive boxes every day without safety equipment, without back braces, they develop a lifelong back problem. You take an older worker, you know, maybe not in the best physical shape, but still no protective equipment. They can ruin the last years of their lives with these severe injuries. Again, you know, back injuries, arm injuries, hip injuries, knee injuries. These are things that persist and they last with these people forever. All because Amazon is one, making them meet these insane quotas.

Mike Papantonio:             Speed, got to do it fast. The growth, growth of the company is just geometric. So isn’t this predictable? I mean, if you’re an attorney and you’re looking at the concept of foreseeability, you say what might happen here, well you’re going to have all this stuff, it’s going to be a chain of events that makes perfect sense. The point is, at some point you check yourself and you say, okay, wish I hadn’t done that. And you do the decent thing and say, let me just regroup. Let me just revamp the people who are making these decisions for my corporation and come away with a legacy that means something. Don’t you think?

Mike Papantonio:             The fight for free speech has engulfed big tech as, as Florida becomes the first state to punish social media platforms for banning political candidates. How did we get here and will other states follow suit? I have attorney Steve Luongo joining me now. Steve, this sounds like an entire new industry. It sounds like, okay, you’ve got, you’ve got Twitter who wants to ban somebody because they disagree with what they say. First of all, most people are pretty torn on that. They don’t want us anoint, you know, they, they don’t want, this, this is Orwellian, to, to, to think that all we can think about is what the big tech people want us to think about. But Republicans like DeSantis are grabbing a hold of that and if you look at the numbers, the population is sick and tired of it. Take it from there.

Stephen Luongo:               Right. Absolutely. It’s what you’re talking about is these elections and the political elections that we’re talking about are razor thin. So you have both sides of the party going half and half. And what governor DeSantis signed last month is a bill that does certain things. It allows Florida citizens to bring cause of action individually against these social media tech platforms. It also allows the Florida attorney general to bring cause of action against them. And lastly, and what’s been getting the most publicity, is it prohibits these social media platforms from what they call de-platforming or taking off all Florida, Florida political candidates and allowing the Florida election commission to impose large monetary fines, upwards of $250,000.

Stephen Luongo:               Absolutely. The two biggest attacks on this bill that we’re seeing are obviously constitutional is a first amendment violation or not. Are we making a private company publish speech against their own private will and enforcing government speech? What we also are seeing is the violation of what they call the chapter 230 of the communications decency act. And that allows these social media platforms immunity to monitor their own platform and the communications that are expressed there. Now, the caveat to that is that the act allows them to do that. However, they need to do it in good faith and that’s really kind of the argument we’re seeing from Republicans and conservatives is that they’re monitoring behavior and content on these social media platforms, but they’re not doing it in good faith.

Mike Papantonio:             Okay. Just to show, just to, to make the point that this is not a forgone conclusion, that this is unconstitutional. Why, why? Because you have a diff, you have an issue that a jury could disagree about. One side says black, the other side says white, anytime you have a dispute like that as a matter of law, it’s very difficult to come in and say, well, we’re just going to make it go away on a summary judgment or directed verdict, because there is a question. There’s a question of fact, right?

Stephen Luongo:               Absolutely. And what we’re seeing right now is three days after this law was signed, it’s supposed to take effect July 1st. There was a lawsuit filed in Tallahassee in federal court, and we’re going to find out the answers there. They are alleging the same things that we just talked about, constitutional violations of the first and 14th amendment, as well as the federal preemption of chapter in section 230.

Mike Papantonio:             Because it is, you, you can’t say that as a matter of law. But you can, because you have to judge the facts. Some trier fact has the right to say, look, let me know, candidate, did they act in bad faith? Platform, do you think you have this exclusive right? And here’s where I think it goes, the American public is at this point, just look at the, these aren’t my numbers. Look at the numbers. They’re fed up with social media tech giants making decisions about what we can and can’t listen to. 1984, Right?

Mike Papantonio:             I mean, that’s what we’re talking about. Don’t you give them the right to say what they want to say, even though you might disagree with it. I mean, look, you had George Orwell spent four books about this, and it’s just, it’s, it’s surfaced again. And we have to really think analytically about it because I don’t think there’s a clear answer here. DeSantis, of course, he’s just playing to the public. Let me be a demagogue. Let me see what I can stir up. But where this thing lands, it could be a surprise, couldn’t it?