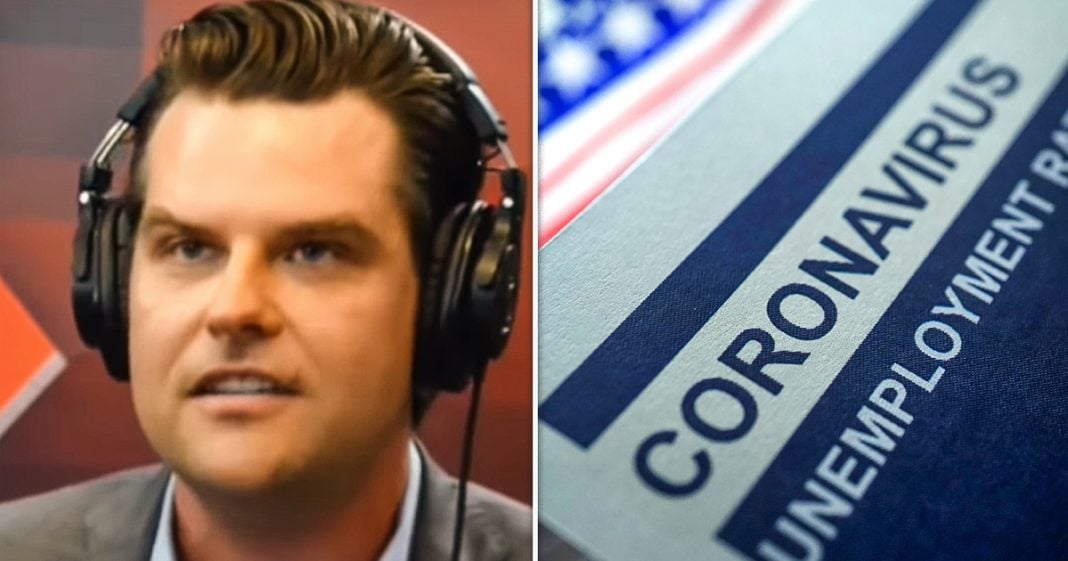 Mike Papantonio:             Congressman Matt Gaetz is now being investigated for potentially obstructing justice thanks to information obtained through cooperating witnesses. Joining me to talk about this is Farron Cousins, and I say it every week, some people get so tired of it, you are the best progressive voice in this country. I really mean that.

Mike Papantonio:             So give me, give me your take on this. I don’t, you have followed this. You’re on a jihad. You really are on a jihad. So let’s talk about what the latest development is. Okay.

Farron Cousins:                  Well, it’s very interesting. Last week, you know, it came out that they’re trying to see if Matt Gaetz may have obstructed justice. And this is based on a telephone call that took place between Gaetz’s ex-girlfriend and another witness. This was one of the people who had, essentially been one of the girls that Joel Greenberg had been using. So Gaetz’s ex-girlfriend was on the phone with this young woman and she says, well, hang on, let me patch in Matt. So they call Matt Gaetz, you got a three-way phone conversation happening here. And now the authorities believe there may have been obstruction of justice on this call and let’s, let’s not forget about a month ago, you and I were talking about the ex-girlfriend.

Farron Cousins:                  Who was telling her family members, she is worried she may have obstructed justice, and now we’re, we’re getting to the heart of that. It all revolves around that phone call.

Farron Cousins:                  Right. And she’s the one who’s also now cooperating with the feds. So whatever information she gave is what led to these new.

Mike Papantonio:             I want to tell you something. You know, I’ve had people call me and I’ve talked to folks that say, no, he’s fine. I mean, everything’s going to be okay with Matt Gaetz. And I keep saying, really, it’s not the way it’s looking right now. Right now, let’s assume you got a recording of something that sounds like obstruction of justice. First of all, obstruction of justice is not, it’s not an easy thing. The words have got to be right. Second of all, department of justice typically does not, they’re not going to go after anything that’s not low hanging fruit. Now the question is this has been going on for months. Are they worried? Are they worried, you know, is this is, is this the tail wagging the dog?

Farron Cousins:                  See, you know, that’s one thing I’ve, I, I’ve kind of been wondering myself here. Are they going after obstruction because that’s all they have left or are they looking at obstruction as maybe a way to work out a deal later and say, okay, we’ll drop the obstruction if you do X, Y, or Z? So I think it really could be either way. This could show they got nothing else so they’re trying to get whatever they can on him, or they want to get a small thing so they can get him to cop to the bigger things. You know, that’s a mystery that’s only gonna be unfolding.

Farron Cousins:                  There’s so many different parts of this. You also have, you know, whether or not Matt Gaetz was involved in helping some of his good buddies in the medical marijuana industry as he was, you know, lobbying to get legislation passed, taking money. There’s so many pieces. I’m sorry, it’s so hard to keep track of everything here. But I think the big one is not even the obstruction. The big one is going to be if they, if they pin him traveling out of, across state lines.

Mike Papantonio:             That’s my prediction. It’s going to be the Mann Act. Is the Bahamas meeting, they have the girlfriend there.

Mike Papantonio:             They’ve got other women there. And then they’ve got the 17 year old that if you, if you, if you believe the story, Matt Gaetz had sex with this 17 year old. I mean, it, it just doesn’t, this is not an easy, if I’m a defense lawyer, I’m looking at this and I’m saying, there’s so many parts. There’s so many avenues they have to go after you with that maybe we ought to be realistic. But I gotta tell you something, as I’ve watched the department of justice for a career, if it’s not low hanging fruit, they’re not going to do it. Especially with a target like this.

Farron Cousins:                  So he must’ve had some very valuable information on high level targets. And they did say, I think it was five, five men, we don’t know who they are. One of them could be Gaetz. Maybe it’s not. But Greenberg had lots of info. They’ve accepted the plea. He’s obligated to work with them.

Brigida Santos:                   This appears, yeah, this appears to be for political reasons because that money has already been appropriated. It’s true that the most recent employment report from the Bureau of labor statistics reveals that millions of Americans still haven’t returned to work despite millions of job openings. But claims that this is due to enhanced unemployment benefits, simply isn’t supported by national data. The economy has only recovered 63% of the 22 million jobs lost at the peak of the pandemic. Employment trends are headed in the right direction, but this is of course going to take time. Many people are still worried about getting sick and the majority of recent labor gains have been realized by men. Many women left the workforce during the pandemic to care for their children and a lot of them still don’t have childcare options yet. But as schools reopen and as kids return to classes, women will likely go back to work. Now, some major players, we’ve talked about this before, in the fast food industry that are claiming they’re facing labor shortages are not accounting for the fact that women make up the majority of workforce in the fast food industry.

Mike Papantonio:             Yeah. So the Republican talking point is if you go to your local restaurant and they don’t even have enough people to serve. So they’re closing down lunches. They don’t even have enough people to make the restaurant work. Those are the talking points. Matter of fact, you’ll, you’ll, they’re doing a lot of these cameos now where they’re showing up to a restaurant, restaurant owner says, I can’t even get anybody to come in here and, and tend bar or work in the service industry. That’s their big talking point. So you say that’s not accurate, huh?

Brigida Santos:                   No, not necessarily. And this is the free market. If those companies can’t get people to come and work for them for low wages, then they should probably just change their incentive structures and give people more money and other things that would help them have a living wage.

Mike Papantonio:             Well, when does the extra unemployment benefits, when is it going to end?

Brigida Santos:                   Sure. Republican governors in 25 States will end extra pandemic emergency benefits in June or in July, rather than September when they were initially set to expire under federal coronavirus stimulus packages. Now, when this happens, nearly 4 million people will be impacted with 2 million losing their benefits altogether. According to data from the joint economic committee, local communities could lose over $12 billion as a result of cutting unemployment insurance before September. Half of the country is now essentially turning away billions of already appropriated federal funds that could have then been pumped back into the economy. This money was promised by the government to the American people after ordering them to stop working and now it’s being taken away.

Mike Papantonio:             Well, is the federal government going to step in? Is the Biden administration going to say, you know, I don’t care what y’all do Republican governors, we’re going to step in to solve the problem. What do you think?

Brigida Santos:                   No, even though the funds came from the federal aid packages, state governors ultimately have the final say because it’s the states that are administering unemployment funds. So the labor department says it’s unlikely to step in to try and stop those states from ending enhanced benefits, but pulling benefits early is now a grand experiment. We’re going to see whether it forces people back into those low wage jobs or whether more families are going to fall further into poverty following those government mandated shutdowns.

Mike Papantonio:             So you’re saying most people are can, yeah, one, most people are concluding that, hey, you know, I could go back for this very low wage or I could take a little less, take this unemployment as long as I can and improve, you know, improve my quality of life, I guess, is, is what you’re saying here. That’s kind of the thought out there. And when you look at some of the wages that some of these restaurants are paying, you know, even when you add the tips to it, it, it, it might be a better deal for some of these folks. What do you think?

Brigida Santos:                   I don’t know if it’s necessarily a better deal. But people don’t get vacation that’s paid. They don’t get paid time off at all, even when they’re sick. And so, yeah, it’s possible that some people would rather take that unemployment. But as I said, that argument isn’t really supported by data. A lot of people simply just haven’t gotten back to work for other concerns about their health and also childcare and things like that.