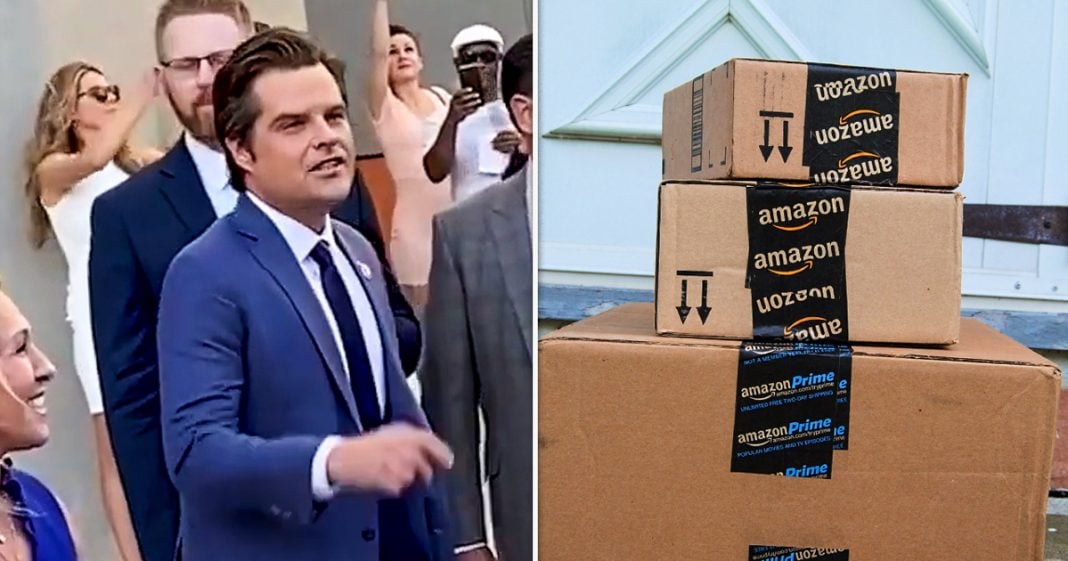 Mike Papantonio:             Congressman Matt Gaetz has big plans for his future, but an ongoing DOJ investigation might end those dreams this summer. Joining me to talk about this is Farron Cousins from the trial lawyer magazine. Eddie Munster’s back in the news almost every day, but this is crazy headlines. He wants to run for president and he’s doing it so he can help Trump during the debates. He says he can be the attack dog and he can take the heat off of Trump if Trump decides to run. Wow. What, what is your take?

Farron Cousins:                  You know, I’m still kind of shocked that Gaetz is going around publicly and of course, right now he’s on his little cross-country tour with Marjorie Taylor Greene, acting like his life is not totally falling apart behind the scenes. But, you know, this comment he made last week that, yeah, I, I’m considering running, running for president in 2024. I can handle what’s left of Biden, was what he specifically said. And this guy doesn’t think that anything is going to touch him. And I don’t know if it’s because he’s putting on a brave public face or if he legitimately believes that he is not in any danger whatsoever, because he’s never really been in trouble. Daddy’s gotten him out of everything in his past.

Mike Papantonio:             A politician, no matter what they do, I’m not going to resign. You know, they’re being told by leadership, don’t resign. I mean, it proved true with Trump, right? He ran for president. Proved true with Bill Clinton. I mean, you know, they had him for perjury. Don’t resign, life as usual. It’s almost like the last person to resign was Richard Nixon. But, so this is the course they’re taking and he, it’s the Gaetz Greene team. Tell me about Marjorie Greene, how she fits into all this.

Farron Cousins:                  She is one of the few people who’s willing to say that I still stand with Matt Gaetz. And of course it’s because they both are just devoted disciples to Donald Trump. So they’re on their little tour right now, trying to claim the election was stolen, trying to really rally the Trump base because that’s also the Gaetz and the Greene base. That’s what they need to continue their political career. So if Matt Gaetz does want to run for president, he’s going to need those people that are showing up at his rallies now to show up for him at the polls. But like you mentioned, Gaetz doesn’t necessarily want to run for president because he thinks he’ll win. He is basically the Trojan horse candidate. There’s lots of whispers that Ron DeSantis, Florida’s governor, might want to run. And in order to keep DeSantis’ hands clean, to not make any Republicans mad, you send Gaetz out there on the debate stage to hurt everybody else. And you say, can’t we just get along and be nice.

Mike Papantonio:             Of course, with DeSantis, I mean, DeSantis has got to understand the guy’s radioactive.

Mike Papantonio:             You don’t want his name around. Tell, just take a minute on the Marjorie Greene. What, what, what are the hits on her? What, why, what are the problems there? How does she fit in so well with Gaetz?

Farron Cousins:                  I was going to say, it depends on the day of the week with her, because she’s got a new scandal more frequently than this guy. The most recent one, obviously, where she said that wearing a mask is akin to what happened during the Holocaust. You know, that obviously was a hugely disgusting statement by her. There’s the video that surfaced of her from about a year or two ago, harassing AOC, this was before Greene was even in Congress, you know, peeking through her mail slot, screaming at her in her congressional office. The, the ads that she has put out with the sound of gunshots when she mentions Pelosi’s name.

Farron Cousins:                  Well, you know, I do have to add here too, because another story about Matt Gaetz came up in the last couple days. This one involves a yacht that Gaetz was, Gaetz and his fiance, were allegedly going to buy this yacht. They had $155,000 per aside. The yacht, by the way, is named Ol Pappy.

Farron Cousins:                  You know, that, that’s my theory. Of course, it’s just a theory, but I really, look, when you’re in as much trouble as he could be and you have a lot of money put aside and suddenly you can’t account for the money. The feds need to start checking with his friends.

Mike Papantonio:             It doesn’t look like Amazon’s antitrust woes are coming to an end anytime soon. DC’s attorney general has finally filed a lawsuit against the tech giant, alleging predatory price fixing. Steve Luongo joins me now to talk about this. It is so overdue, isn’t it? These folks have been getting away with absolute murder where it comes to a monopoly.

Stephen Luongo:               Absolutely. And what it stems is the attorney general in DC, Karl Racine, has alleged that Amazon is essentially price fixing, and they’re doing it by what’s called these most favored nation agreements, which is requiring these third-party sellers if they want to sell their product on Amazon, they got to play by Amazon’s rules. Which means incorporate Amazon’s higher fees and commissions to the product price that they want to place on Amazon. And these fees and costs can be upwards of 40% additional of what the product price actually is. So not only are they charging higher prices, it doesn’t stop there. What they also require is that these third-party sellers keep that price floor where it is if they want to go sell on a different platform, even their own website.

Mike Papantonio:             In other words, you have to play by our rules if we, we’re going to squeeze every dime out of the consumer, you either play with us or you don’t. You’re going to go away, basically, that’s what happens. How does, earlier this year, Amazon was already hit with a lawsuit for, for antitrust violations. It, hasn’t it become part of the system? They figure out how much money they’re making, a corporation says, we’re making this many billion dollars. We get hit with this fine for 500 million. It’s not a big deal. We’ve still made, we’ve still made a billion dollars. Isn’t that kind of the, the approach here? But they were hit already, weren’t they?

Stephen Luongo:               They were. And that one deals a little bit different, that deals with eBooks or electronic books. And that allegation and lawsuit, antitrust lawsuit, is up in federal court in New York. That was brought by a law firm. This is, this one that we’re talking about now in DC was actually the first time government has filed an antitrust lawsuit against Amazon. But you’re absolutely right. It’s, it’s about time. I think what stems, and what these lawsuits are stemming from, is the house judiciary committee for antitrust last year, came out with that 16 month report saying, hey, Apple, Amazon, Google, Facebook, these are monopolies and they’re, they’re behaving in anti-competitive practices. And I think we’re seeing the ripple effects.

Mike Papantonio:             Yeah, you’re seeing states actually increase the ability for private lawyers to go after these folks. A matter of fact, in Florida, that just occurred, it’s, it’s on the books in a couple of other, other states where private lawyers can start pushing back. That’s when change takes place, because government won’t do it. They’re, they’re, they’re not powerful. I mean, they, they simply don’t have the, the wherewithal to go to court, try these cases. But if you put thousands of lawyers on this all over the country, in private practice, you got something different. You think these lawsuits are going to expand as we go forward?

Mike Papantonio:             If they don’t do it, they need to open the doors and let private attorneys going after these folks. Thank you for joining me. Okay.