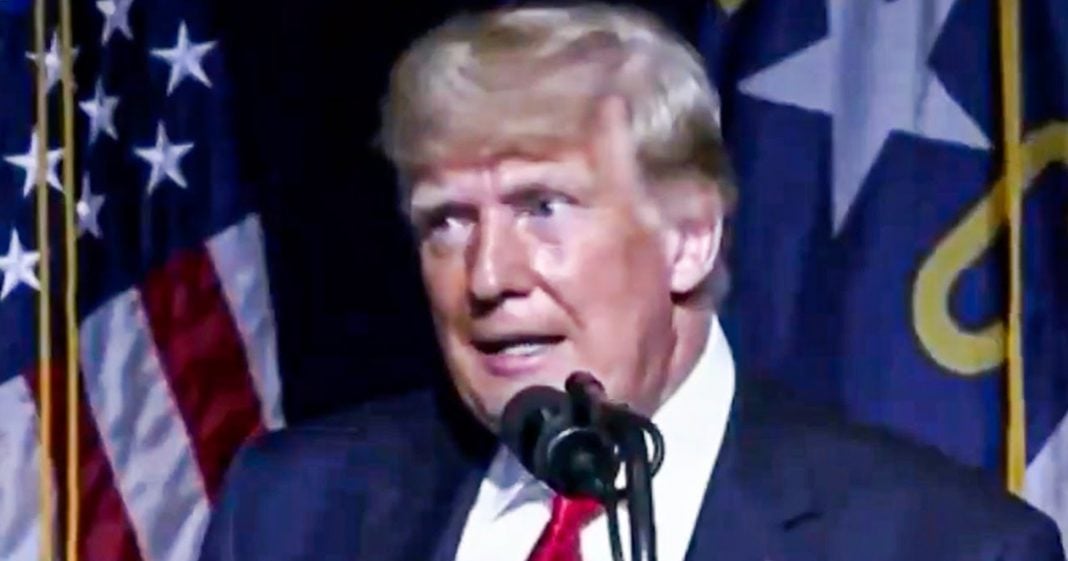 Donald Trump gave a speech over the weekend in North Carolina, and it couldn’t have gone worse for the former president. In addition to his low energy and lazy talking points, he also stumbled over phrases and appeared to have his pants on backwards (though fact checkers say that they were not backwards.) The man is out of his element, and a summer tour is only going to drive people away from him. Ring of Fire’s Farron Cousins discusses this.

Donald Trump gave a speech to the North Carolina GOP convention that was taking place over this past weekend and man, was it a doozy. In addition to predictably talking about how the election was allegedly stolen from him, even though it was not, the guy appeared with low energy, he stumbled over all of his words and Twitter erupted because it looked like even though fact checkers have said he did not, but it looked like his pants were on backwards. Now again, Snopes has said, no, no, no, no, the guy’s pants were totally not on backwards, but it looked very weird. If you’ve seen the pictures from it, if you’ve seen the video where he steps aside from the podium. Yeah. Something weird was happening in the front of his trousers. But that’s not the important thing. The important thing was the fact that he appeared to be slipping more than usual. Take a look at just a couple clips from that speech where he just could not get his words straight. Here it is.

So we have to defund our freedoms, he says. No more freedoms. We’re taking all the money away from freedoms. Of course he meant defend our freedoms, but, you know, that, that’s a slip to be honest, I’m gonna let that slide. I, I’ve made plenty of gaffes like that over the years. So that’s not a big deal. But then it was the suspended removals and even removables removals, um, that one’s more of, hey, maybe there’s something wrong with this guy type slip, suspended removals, and even removables removals. Like, what, what even were you trying to say there? I think is the big question, because he hasn’t suspended removals of undocumented immigrants. We’re still shipping people out of this country at a record pace. It’s disgusting actually. So, you know, of all the things to attack Biden on, what’s happening down there at the Southern border really isn’t one because for the most part, he is continuing the disastrous policies that Donald Trump put in place, which were basically an expansion of the Obama policies that had been put in place.

So immigration hasn’t really changed all that much, but, I understand that you want to make your base think that, want the Republicans to think that so that you can run on that again in 2022. But here’s the thing. This guy’s not up to snuff, maybe it’s because he’s gone through months of not having rallies, months of not giving real speeches other than little ones stepping out onto the balcony of Mar-a-Lago because somebody was having wedding and you decided to crash it with a bizarre speech. But this isn’t the kind of thing that’s going to draw large crowds for an upcoming summer, summer Trump tour, which let’s not forget is supposed to be happening. And I don’t think given Donald Trump’s performance in North Carolina that these rallies he’s supposed to be giving later in the summer, I do not think they’re going to be that successful. Even some conservatives came out and said, he looks pale. He looks more wrinkled, very low energy. The guy’s not the same as he used to be. So I still want him to go on these rallies. I do, because the public got a quick reminder of how horrible and stupid this man was over the weekend. And I think they need a couple more reminders before the summer ends.