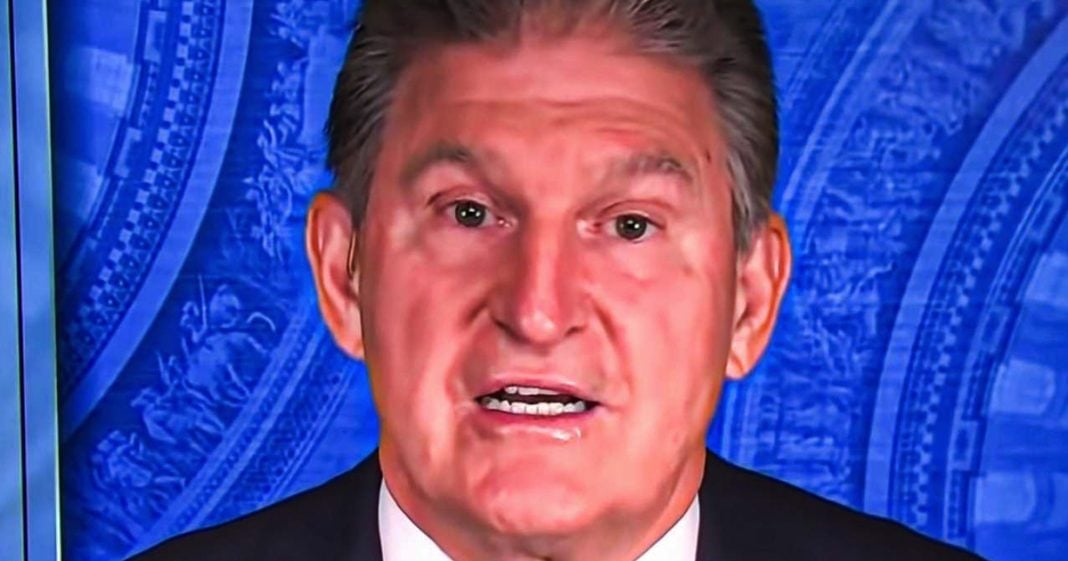 Democratic Senator Joe Manchin apparently doesn’t like being part of the majority party, as he announced in an op-ed over the weekend that he will NOT be supporting the voting rights expansion legislation known as the For The People Act. This move could easily cost Democrats the midterms based solely on the number of people that wouldn’t be able to vote with these added protections. But worse than that is Manchin’s reasoning, which makes absolutely no sense at all. Ring of Fire’s Farron Cousins discusses this.

Republican Senator Joe Manchin and no, that was not a slip of the tongue, decided over the weekend to publish an op-ed in the West Virginia Gazette, where he came out and defended, essentially, the Republican attack on voting rights across the country, by saying that he is not going to vote with the Democrats and support the for the people act, which is a massive voting rights expansion here in the United States, designed to counter a lot of the Republican bills at the state level curtailing voting rights. This is what Manchin had to say. Again, this is his own words in his op-ed. Unfortunately, we now are witnessing that the fundamental right to vote has itself become over, overtly politicized. Today’s debate about how to best protect our right to vote and to hold elections, however, is not about finding common ground, but seeking partisan advantage. Whether it is state laws that seek to needlessly restrict voting or politicians who ignore the need to secure our elections, partisan policy-making won’t instill confidence in our democracy. It will destroy it.

As such congressional action on federal voting rights legislation must be the result of both Democrats and Republicans coming together to find a pathway forward, or we risk further dividing and destroying the Republic we swore to protect and defend as elected officials. You do realize a majority of Republican voters support this thing, right? A majority of Republicans in this country support the for the people act. So it is bi-partisan you dip. It just doesn’t have Republican lawmaker support. But if you were to go outside your little DC bubble for a little bit, Joe, you would see that, hey, oh my God, people actually like this thing, including the Republicans. But how can you claim that this is a partisan piece of legislation that you can’t support because there’s no Republican support for it. And then let all these Republicans at the state level, just do whatever the hell they want. That’s partisan you idiot.

He continues, this more than 800 page bill has garnered zero Republican support. Why? Are the very Republican senators who voted to impeach Trump because of actions that led to an attack on our democracy unwilling to support actions to strengthen our democracy? Are these same senators who many in my party applauded for their courage now threats to the very democracy we seek to protect? Yeah. Yeah, they are, you idiot. See, this was the problem and this is what me off during the time when, when Democrats were praising all those Republicans like Liz Cheney and Mitt Romney, and I would do videos and I would say, hey, don’t forget, they’re still horrible people. And people would get mad at me for saying those things. Like, oh, you got to give them credit. Yeah, I did give them credit, but they’re still horrible people. But now Joe Manchin is taking the praise from those very Democrats and using it against the Democrats saying, obviously these are good people and now suddenly they’re not. No, they never were. They did one decent thing in their lives to save their own political behinds and now he’s using it against them.

God bless it. It’s on of those situations where I told you so just doesn’t quite cut it. This is one of those situations where I didn’t want to be proven right. But I was. Joe Manchin’s a slime ball. Joe Manchin should be out of the Democratic party. Joe Manchin should have any and all support and funding from the DNC cut from him. Democrats in the Senate need to strip him of all of his leadership levels, kick him off all the committees and say, you’re not with our party. You are clearly against us as your op-ed states. We’re done with you. We’re cutting you off. You go do whatever the hell you want now. And if it means that he joins Republicans and Democrats lose the majority in the Senate, oh frigging well, because as long as he remains a Democrat who votes with Republicans, you don’t have a majority anyway. And that’s what we’re dealing with today. Joe Manchin needs to be kicked out of the party because his action right here likely just handed the midterm election to the Republicans on a silver platter.